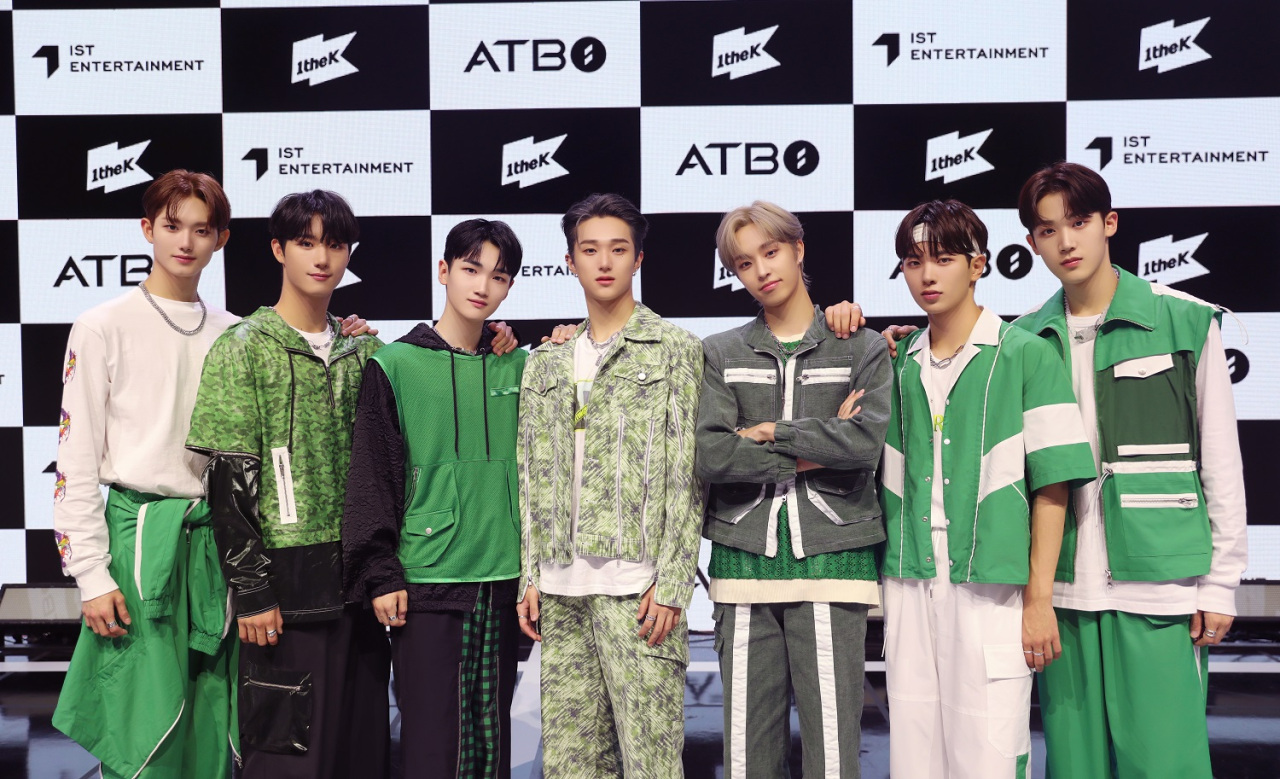 Formed through the TV survival show “The Origin - A, B, Or What?,” the seven-member group finally entered the K-pop scene and conducted a debut showcase a few hours ahead of the album drop on Wednesday.

Making their first appearance in front of the media, the band’s leader Oh Junseok said, “Our long-held dream of debuting is finally here. It didn’t really hit us few hours ago, but standing here on the stage, I now realize it. We will try our best to return everything through our performances.”

ATBO stands for “At the Beginning of Originality.”

The seven members were put together through agency IST Entertainment’s debut audition competition, which aired on TV channel MBN and the online video streaming platform Kakao TV from December 2021 until this February. IST, home to popular K-pop groups Apink, The Boyz and Weeekly, is a label affiliated to the South Korean entertainment conglomerate Kakao Entertainment.

The band’s debut album “The Beginning” tells the boys’ stories about a “beginning” and an “origin” themed around the keywords of light, darkness and colors, IST explained.

Fronting ATBO’s debut album is the title track “Monochrome,” with the sub-title “Color.” The hip-hop dance tune, defined by its tense and addictive base line and dynamic flow in melody, captures the septet’s vision to paint the world in their colorful shades.

The group’s rapper Oh Jun-seok, who contributed to writing the rap verses of the title song, said he edited the lines some 20 to 30 times, pondering about how he could best depict the group’s unique colors through the rap lyrics.

“I thought hard about how I could show ATBO’s colors (through the rap lyrics). Rather than setting forth my own answer about myself and the members, I talked with the members a lot and we shared feedback with each other,” said Oh Jun-seok, who contributed to writing the lyrics of five of the album’s tracks.

Bae Hyun-jun, another rapper in the group, also took part in writing the lyrics to three of the tracks of “The Beginning.”

“While only Hyun-jun and I participated in the rap-making this time, all the members are currently studying lyric-writing and attempting composition, with the goal to one day tell our own stories through our own strengths,” the band’s leader said, adding, “As a K-pop group, we hope to spread positive influence through our own stories.”

Including the instrumental intro track to the album, “The Beginning” is a six-track collection that also comes with four side tracks: “Graffiti,” “High Five,” “Wow” and “Run.”

On their goal as K-pop musicians, Ryu Jun-min said, “As a team, we aim to follow the steps of K-pop idol groups who came before us in bringing about good influence and changes around the world (through our music.)”

The band’s youngest member Won Bin said, “Just as proclaimed through our name, this is the start to our originality, and we hope to share our original stories and show our colors. Please look forward to us.”