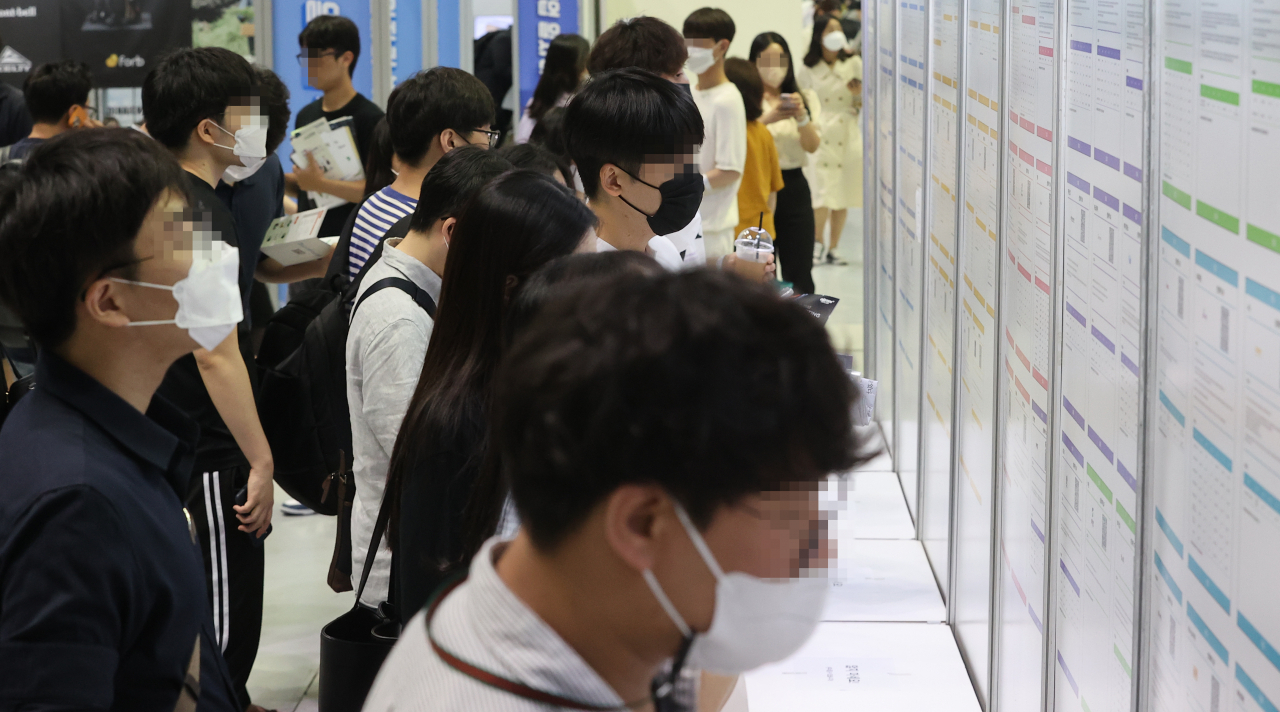 In this file photo, job seekers look at employment information at a job fair held at the Convention and Exhibition Center in southern Seoul on July 5. (Yonhap)

The South Korean economy grew at a faster pace in the second quarter than three months earlier as private spending picked up due to eased COVID-19 restrictions despite a fall in exports, the central bank said Tuesday.

The country's gross domestic product (GDP), the broadest measure of economic performance, grew 0.7 percent on-quarter in the April-June period, accelerating from a 0.6 percent increase in the first quarter, according to an advance estimate from the Bank of Korea (BOK).

It marked the eighth straight quarterly growth since the third quarter of 2020, when GDP rose 2.3 percent on-quarter.

Consumer spending rose 3 percent on-quarter in the second quarter, as spending on semidurable goods and in-person services, such as accommodations and restaurants, increased.

On April 18, South Korea lifted most COVID-19 restrictions, except the mask mandate, in a major step toward returning to pre-pandemic life.

Government spending increased 1.1 percent due to increased fiscal spending aimed at coping with the pandemic.

In May, the country created a record extra budget of 62 trillion won (US$47 billion) to support pandemic-hit merchants and vulnerable people.

But exports, which account for half of the Korean economy, shrank 3.1 percent last quarter, compared with a 3.6 percent on-quarter increase in the first quarter.

The BOK said if the South Korean economy grows 0.3 percent on-quarter in both the third and fourth quarter, the yearly growth is likely to meet its forecast of 2.7 percent.

But it noted downside risks to economic growth remains high due to soaring inflation and economic slowdowns in major economies.

"The latest uptick in COVID-19 cases is likely to weigh on consumer spending. When it comes to exports, uncertainty about external economic conditions is high," Hwang Sang-pil, head of the BOK's economic statistics bureau, said at a press briefing.

South Korea saw a flare-up in virus cases in recent weeks due to the fast spread of an omicron subvariant. Its new COVID-19 infections soared to nearly 100,000 for the first time in three months Tuesday.

The South Korean economy faces a risk of stagflation, a mix of elevated inflation and slowing growth.

The country's consumer prices soared 6 percent in June from a year earlier, the fastest clip in nearly 24 years and acceleration from a 5.4 percent on-year spike in May.

In June, the government lowered its 2022 economic growth outlook to 2.6 percent, while sharply raising this year's inflation outlook to a 14-year high of 4.7 percent. The BOK's 2022 inflation forecast stood at 4.5 percent.