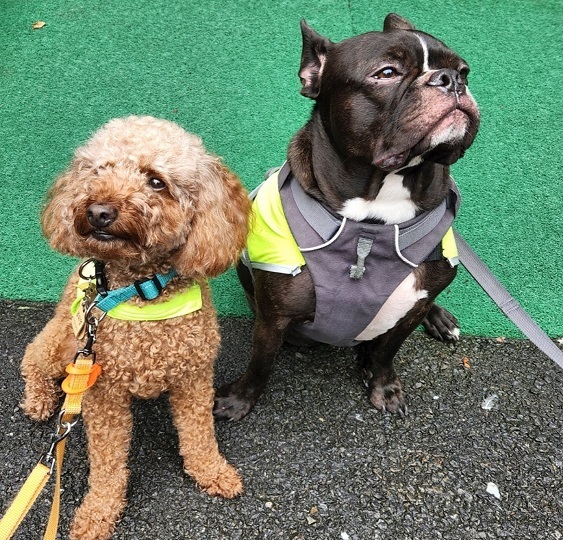 Oh-gu and Woong, the members of “Hachi Petrol,” a pet patrol program which was launched in May by the Seoul Metropolitan Autonomous Police Commission, in partnership with the Gangdong-gu District Office. (Choi Jae-hee / The Korea Herald)

On May 5, the Gangdong-gu District Office in eastern Seoul received a call reporting a damaged road pole posing safety risks to drivers.

It was not residents nor police officers on patrol who found the hazardous situation on the road, but a 2-year-old female poodle named Oh-gu.

“Oh-gu suddenly moved closer to the median strip while walking on a crosswalk with me. She usually likes to sniff everywhere. It was her curiosity that made me spot the damaged pole,” said Cho Mi-young, the owner of Oh-gu in her 60s. 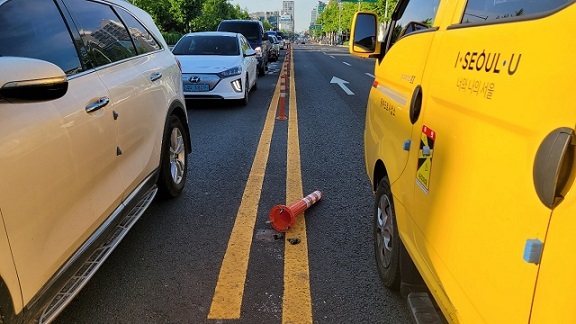 A picture of a broken median barrier found by Cho and her 2-year-old female poodle named Oh-gu on May 5. (Courtesy of Cho)
Following Cho’s report, officials had the road furniture repaired in about three to four hours, she said.

There are 60 or more dogs like Oh-gu who roam around different areas of Gangdong-gu to see if there are any problems or situations that require the attention of city or district officials.

These pooches teamed up with their owners to form the district’s neighborhood patrol squad called “Hachi Patrol,” named after an imaginary creature and guardian against fire and disasters called Hachi.

Launched in May by the Seoul Metropolitan Autonomous Police Commission under the city government in partnership with the district office, there are currently a total of 64 units, each consisting of a dog and its owner, doing the rounds, sometimes daily.

They have made 430 reports, mostly concerning public safety or health hazards such as fly-tipping, roadside hazards or drunk people sleeping on the street, according to the SMAPC. 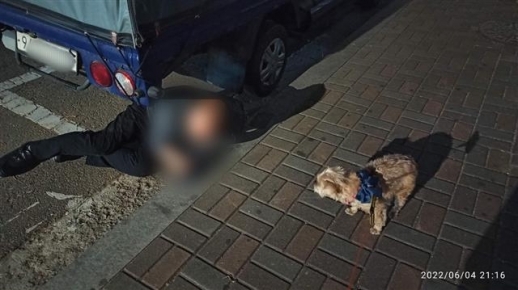 Jjangsoon, a 16-year-old female Yorkshire terrier and the oldest member of the patrol team, near a man lying on the road near a parked truck in Amsa-dong, Gangdong-gu, in June. Jjangsoon’s owner contacted the man’s family and informed them of his location. (Courtesy of Seoul Metropolitan Autonomous Police Commission) 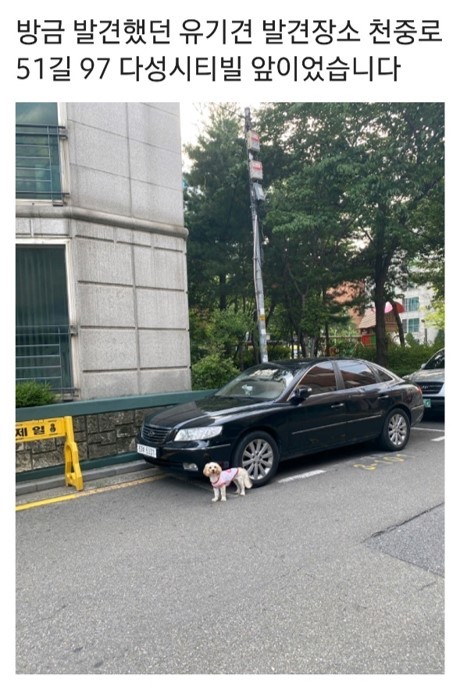 A screenshot of a post, uploaded to a group communication app used by the patrol team members, reporting a stray puppy. (Courtesy of Seoul Metropolitan Autonomous Police Commission)
“15 million of Korea’s 51 million population have pets. The program is aimed at improving the residential environment through teamwork between humans and animals,” said Kang Min-joon, an official at the municipal government. 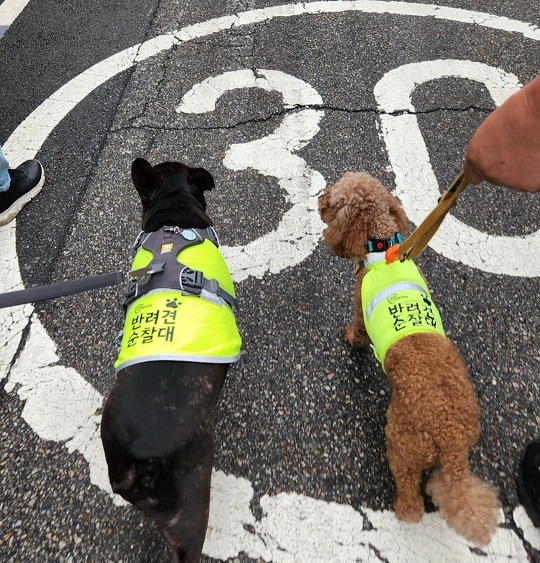 Oh-gu and Woong are on patrol with their owners on Thursday in Seongnae-dong, Gangdong-gu in eastern Seoul. (Choi Jae-hee / The Korea Herald)
On a recent Thursday morning, Oh-gu teamed up with a fellow squad member, a 3-year-old male French bulldog named Woong, to go around the neighborhoods of Dunchon-dong Station and Seongnae-dong. 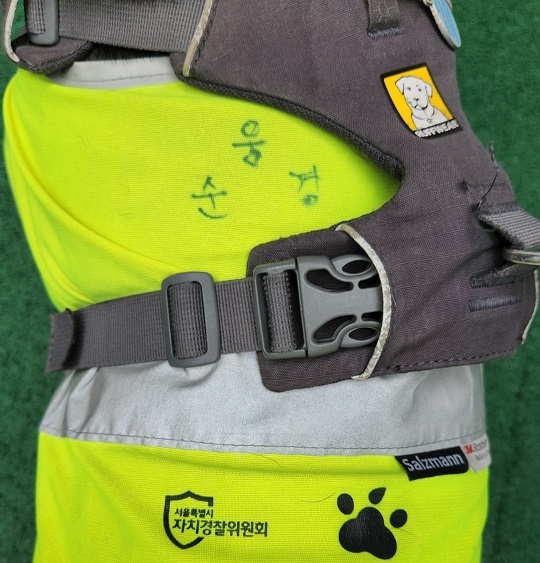 Woong‘s yellow vest has “Woong Soonkyung” written on it. Soonkyung means a police officer in Korean. (Choi Jae-hee / The Korea Herald)
Wearing a yellow vest emblazoned “Seoul pet patrol,” they did what ordinary dogs do on their walks – stopping numerous times to sniff. They became visibly excited when they encountered trash illegally dumped on the street.

“Woong is very curious about his surroundings. He usually goes around every corner, especially areas where trash has been tossed, leading me to report the sites to the district office. There was one time we found some wires hanging loose from a telephone pole,” said Woong’s owner Kim Joo-ryeon, who is in her 50s.

Oh-gu and Woong patrol the area twice a day for two hours each, in the morning and at night, Kim said. They usually work as a joint team.

Regular walks are good for the health of both the animals and their owners. It also helped Cho and Kim to engage more in neighborhood issues and develop a sense of responsibility.

“Now, even when I walk alone, I keep looking around to see if the street poles have any loose wires, or if there’s anything hazardous, like broken glass bottles, on the street,” Cho said.

Woong’s owner Kim, who has lived in Gangdong-gu for more than eight years, spoke of positive responses from neighbors.

“Residents and merchants often ask me about our patrols, and some of them reward Woong with dog treats. I was touched when they treated Woong as if he were a real patrol officer. This kind of affectionate response isn’t something I often experience in daily life,” Kim said.

“While patrolling with my puppy, I found a really dark alley in my neighborhood with only a few streetlamps. One of them was even broken. I requested the district office to address this problem. Residents’ patrolling could provide an additional sense of security to the neighborhood,” Im said. 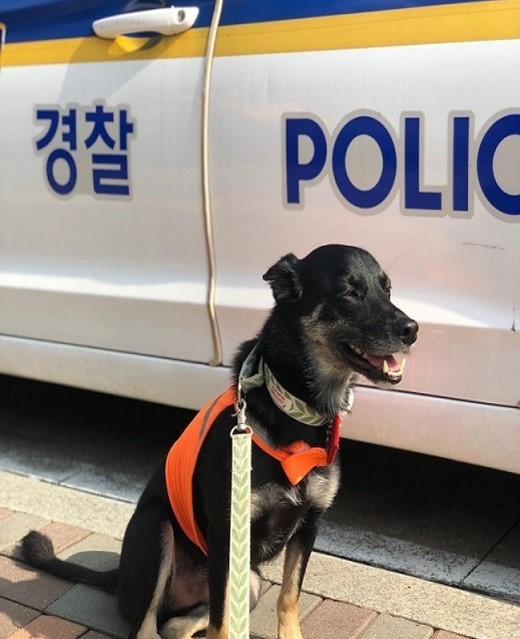 Chappssal, a 4-year-old Doberman mix and member of Hachi Petrol, poses for a photo in front of a police car. (Choi Jae-hee / The Korea Herald) 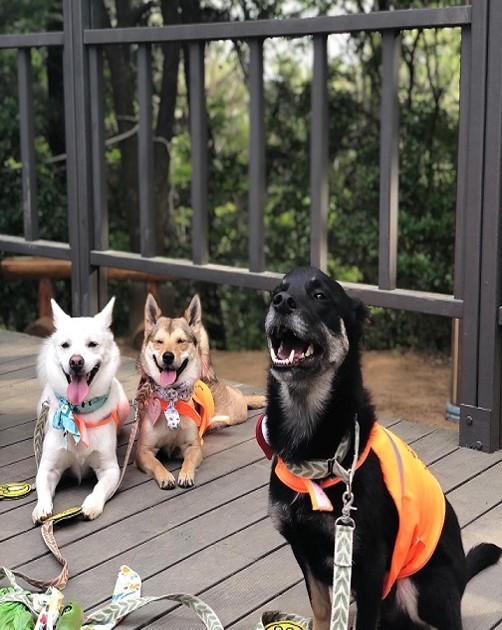 She said she included uncrewed stores in the patrol route, as the number of shoplifting incidents in such places has risen in recent years.

According to data from the National Police Agency, the number of thefts at these stores surged from 203 in 2019, to 1,604 last year.

A recent study conducted by researchers from Ohio State University, which examined crime statistics from 2014 to 2016 for 595 neighborhoods in Columbus, Ohio, found that neighborhoods with more dogs saw their crime rates drop.

People walking their dogs put more “eyes on the street,” which discourages criminals from committing both violent and nonviolent crimes, wrote Nicolo Pinchak, lead author of the study and a doctoral student in sociology at the university.

On the back of positive feedback from residents and growing demand for patrolling among many dog owners, the SMAPC recently decided to expand the pet patrol program to other districts, including Dongdaemun-gu, Gangseo-gu, Geumcheon-gu, Mapo-gu, Seodaemun-gu, Seocho-gu, Seongdong-gu and Songpa-gu.