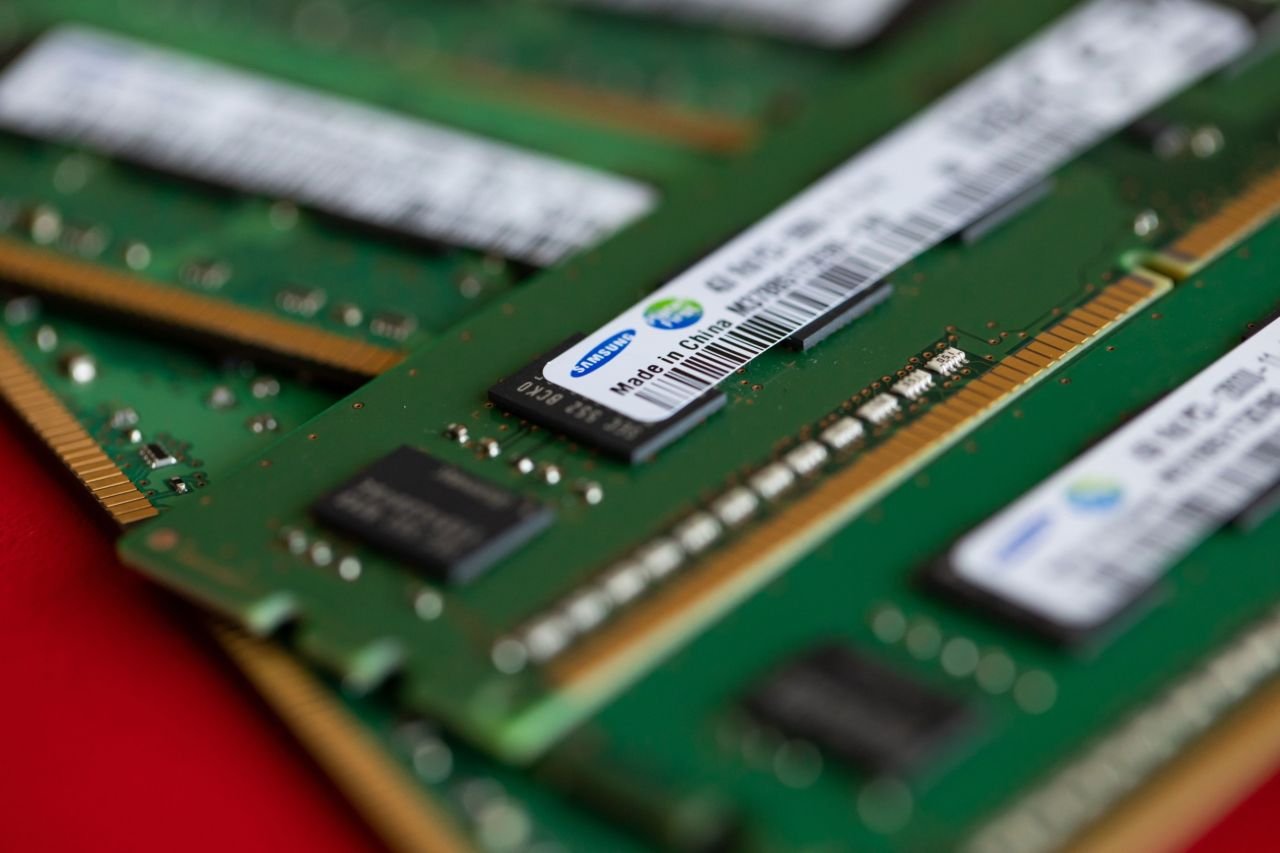 Samsung Electronics’ memory chip modules. Samsung produces 40 percent of its NAND chips in China. (Bloomberg)
As the United States is seeking to include South Korea in a chip alliance it is planning to form, eyes are on whether Seoul would again join US’ apparent effort to strategically isolate its rival China in the semiconductor supply chain.

The US first made the proposal to South Korea, Japan and Taiwan to establish a strategic alliance of global chip powerhouses in March. While the envisioned alliance, dubbed “Chip 4” explicitly aims at boosting the manufacturing prowess of friendly nations, it is largely seen as a move to counter Beijing’s growing influence in the global chip market.

While Japan and Taiwan appear willing to join the initiative, Korean government is still mulling the choice as concerns remain over its strong economic ties with China, its biggest trade partner. China, including Hong Kong, accounts for almost 60 percent of the total exports of South Korean chips.

China has also been very critical of South Korea joining the US-led alliance, even saying it would be “commercial suicide” for Seoul, hinting it would mean losing the Chinese market.

On Friday, a local daily reported that Seoul was positively reviewing participation in the Chip 4, but will be asking for the US to make adjustments to the conditions for joining the alliance.

Citing a government official well-informed on the matter, Dong-A Ilbo reported that Korea saw the US’ proposal of forming the Chip 4 as vague, and that the government would request more details on the purpose of the alliance.

But the official was also quoted as saying that the government thinks Chip 4 would bring benefits for Korea, as economic security has risen as a core value pursued by the government.

Seoul’s Foreign Ministry denied that the government has made a decision yet, but said Friday the government was currently in discussion with the US via various channels to strengthen semiconductor cooperation.

Seoul is expected to make a decision soon, however, as the US has reportedly demanded Seoul to decide by next month.

Under the Yoon Suk-yeol administration, inaugurated in May, Seoul has put building stronger alliance with the US as one of its key priorities.

Korea has joined a number of US-led initiatives in the region, such as the Indo-Pacific Economic Framework, which are largely viewed as means to contain growing presence of China, the US’ strategic rival.

Opinion is still divided here over the benefits of joining the chip alliance.

Science Minister Lee Jong-ho has voiced a rare caution over joining the alliance, saying the decision could affect other industries.

“Although Fab 4 is restricted to the semiconductor sector, it can have an impact on other industries. So we have to be cautious,” Lee said, referring to the four-way alliance by its nickname during his first sit-down with the press last week.

Having world’s two top memory chipmakers, Samsung Electronics and SK hynix, Seoul is concerned whether they would be able to maintain business ties with China, their major customer.

China has strongly opposed Korea’s joining of the chip alliance, stressing how the move could seriously damage their bilateral trust.

“At a time when the global economy is deeply integrated, such a move by the US goes against the current. It is unpopular and will eventually end in failure,” Chinese Foreign Ministry spokesperson Lijian Zhao said on Tuesday.

“We hope relevant parties will uphold objective and fair positions, bear in mind their own long-term interests and the principle of a fair and just market, and do more to ensure the stability of the global chip industrial chain and supply chain,” Zhao said.

“Statistics show that South Korea’s semiconductor exports reached $128 billion last year, and those to the Chinese mainland and Hong Kong accounted for 60 percent,” Global Times said, publishing an editorial titled, “S. Korea should have the courage to say ‘no’ to US coercion” on Thursday.

“Decoupling with such a large market is of no difference from commercial suicide. The US is now handing South Korea a knife and forcing it to do so.”

“Yoon made it clear that we will provide ample explanation to China to leave no misunderstanding,” Foreign Minister Park said on Thursday, after his briefing to the president on Thursday.