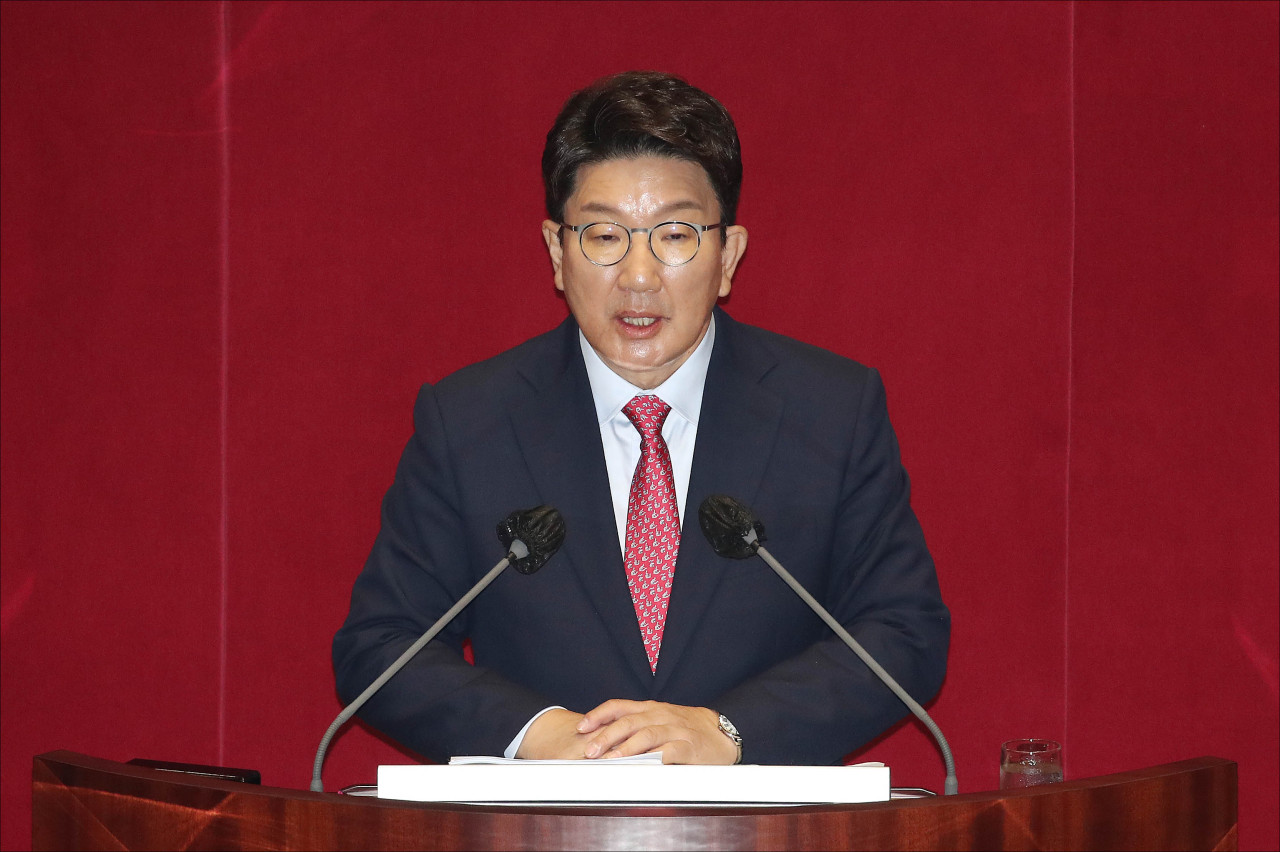 Rep. Kweon Seong-dong, floor leader and acting chairman of the ruling People Power Party, gives a speech at the National Assembly on Thursday. (Joint Press Corps)
South Korea’s ruling People Power Party got to work on the second half of the 21st National Assembly on Thursday, dedicating much of its first publicly delivered speech to blaming the previous Moon Jae-in administration for ongoing socioeconomic troubles.

The floor leader said it was Moon, as well as the main opposition Democratic Party of Korea that brought the country down to where it is today, adding political moves taken for the opposition party’s own sake took a toll on South Korea’s economy and severely damaged people’s livelihoods.

“Why has the South Korean economy fallen into this challenging situation? It’s because of politics,” Kweon said.

“During the five years of the Moon Jae-in government, politics held back the economy. They prioritized their own political gain right before their eyes instead of the national interest and the people.”

Kweon said the Moon administration’s income-led growth initiative “ignored the basics of economics.” The initiative included a sharp hike in the minimum wage rate, which froze the employment market, forcing many small-business owners to close down and taking away chances of employment for low-wage earners, the floor leader said.

After Moon took office, the country’s national debt jumped from 660.2 trillion won ($502.5 billion) in 2017 to more than 1,000 trillion won as of end-April, according to data from the Ministry of Economy and Finance. No improvements were seen despite such a huge increase in debt, Kweon contended.

Kweon denounced the Moon administration’s anti-nuclear power policies, blaming them for causing financial troubles to state-run energy agencies. Heads of government agencies picked by Moon have not stepped down, which is disrupting the start of the Yoon Suk-yeol administration, he said.

“I am not blaming the former government for political purposes; we can only come up with solutions after we correctly identify the causes,” Kweon said.

“We cannot expect a good outcome by repeating the policies that have failed over the past five years. We need to set a new direction for running the country.”

The floor leader vowed that the People Power Party and the Yoon administration will solely prioritize improving people’s livelihoods, and that it will lift tariffs on imported agricultural goods and supply more food products to the market to control consumer prices.

Kweon added his party is ready to lift regulations and lower taxes to create a better environment for businesses and those looking for jobs, adding he will also work with the Yoon administration to cut the number of civil servants to create a smaller government.

The Yoon administration will not cause any security or diplomatic risks to the country as seen during the Moon administration, the floor leader said. The faults of Moon and his aides will be comprehensively investigated and they will be held accountable, he added.

“Diplomacy and security must start from facing the reality,” Kweon said.

“North Korea has continuously strengthened its nuclear weapons capabilities. North Korea is still a threat to South Korea. This is the reality of our security that cannot be hidden,” he said.

Kweon’s speech took place as the rival parties continue to negotiate over which party will take certain key committee chair spots for the second half of the 21st National Assembly. The parties agreed to finalize negotiations by the end of Thursday, with one final item left on the table before the finish line.

If the negotiation is finalized as planned, it would take place 52 days after the legislative branch was effectively thrown into a deadlock after the end of the first half of the 21st National Assembly. Confirmation hearings for some of Yoon’s Cabinet picks failed to take place, while more than 10,000 bills were put on hold.

At the core of the debate is deciding which party should head the Science, ICT, Broadcasting and Communications Committee, as well as the Public Administration and Security Committee.

The two parties have so far agreed to let the People Power Party chair the Legislation and Judiciary Committee, while both take part in a special committee for prosecution reform to be headed by the main opposition party. Negotiations started after the Democratic Party backed out from a deal it reached with the People Power Party in July last year.

No update on the negotiations were available as of press time.