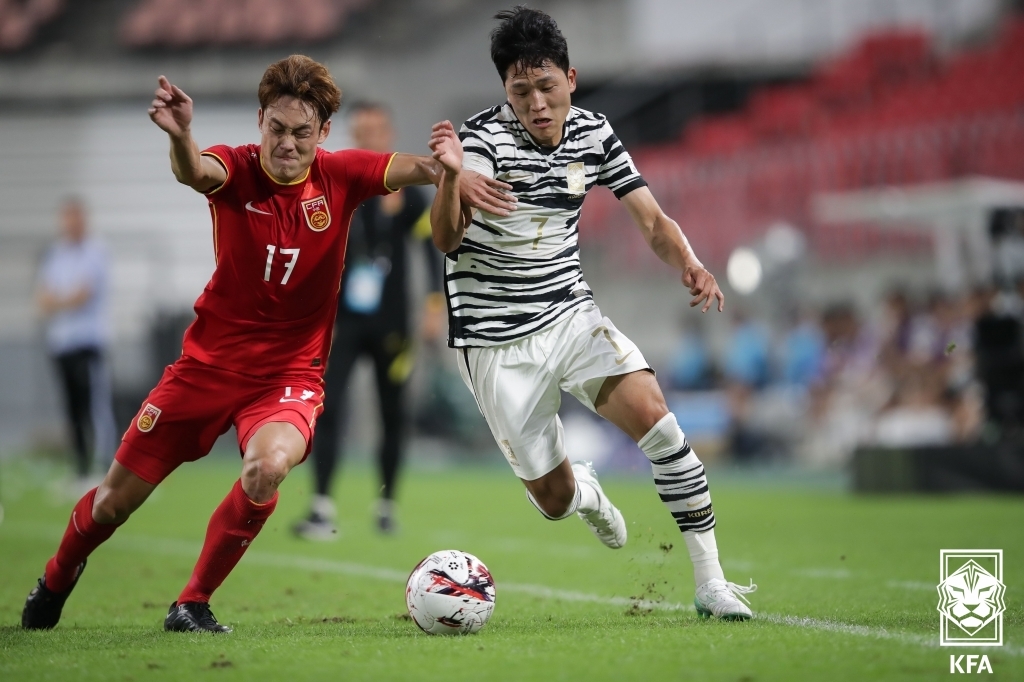 Forward Cho Gue-sung and midfielder Kwon Chang-hoon had a goal apiece at Toyota Stadium in Toyota, Japan, while South Korea also got an own goal from China in their first match of the East Asian Football Federation (EAFF) E-1 Football Championship.

South Korea will next face world No. 145 Hong Kong on Sunday, and then the 24th-ranked Japan next Wednesday. The country with the best record after the round-robin play will be crowned the champion.

The EAFF competition began in 2003 and South Korea have won five of the eight titles so far, including the past three in a row.

South Korea predictably dominated the match from the early moments against a mostly under-23 China team. Midfielders Na Sang-ho and Hwang In-beom each had good looks at the net, and Cho tested goalkeeper Han Jiaqi with a low shot in the 34th minute.

South Korea took the lead in the 39th minute on an own goal by Chinese defender Zhu Chenjie, who inadvertently headed a long pass from Kwon Kyung-won into his own net.

Nine minutes into the second half, Kwon Chang-hoon slotted home a headed pass by Kim Jin-su to double South Korea’s lead. Then in the 80th minute, Cho scored with his right foot inside the box.

This year’s tournament is one of the final auditions for K League players to make an impression on head coach Paulo Bento prior to his final World Cup roster selection this fall.

Since the EAFF event isn‘t part of the FIFA international calendar, foreign clubs weren’t obligated to release their South Korean players. Bento picked 25 out of his 26 players from the K League, the lone exception being defender Kwon Kyung-won from the Japanese club Gamba Osaka.

For the World Cup, Europe-based stars are expected to make up the bulk of the South Korean squad, leaving precious few spots for K League players. (Yonhap)