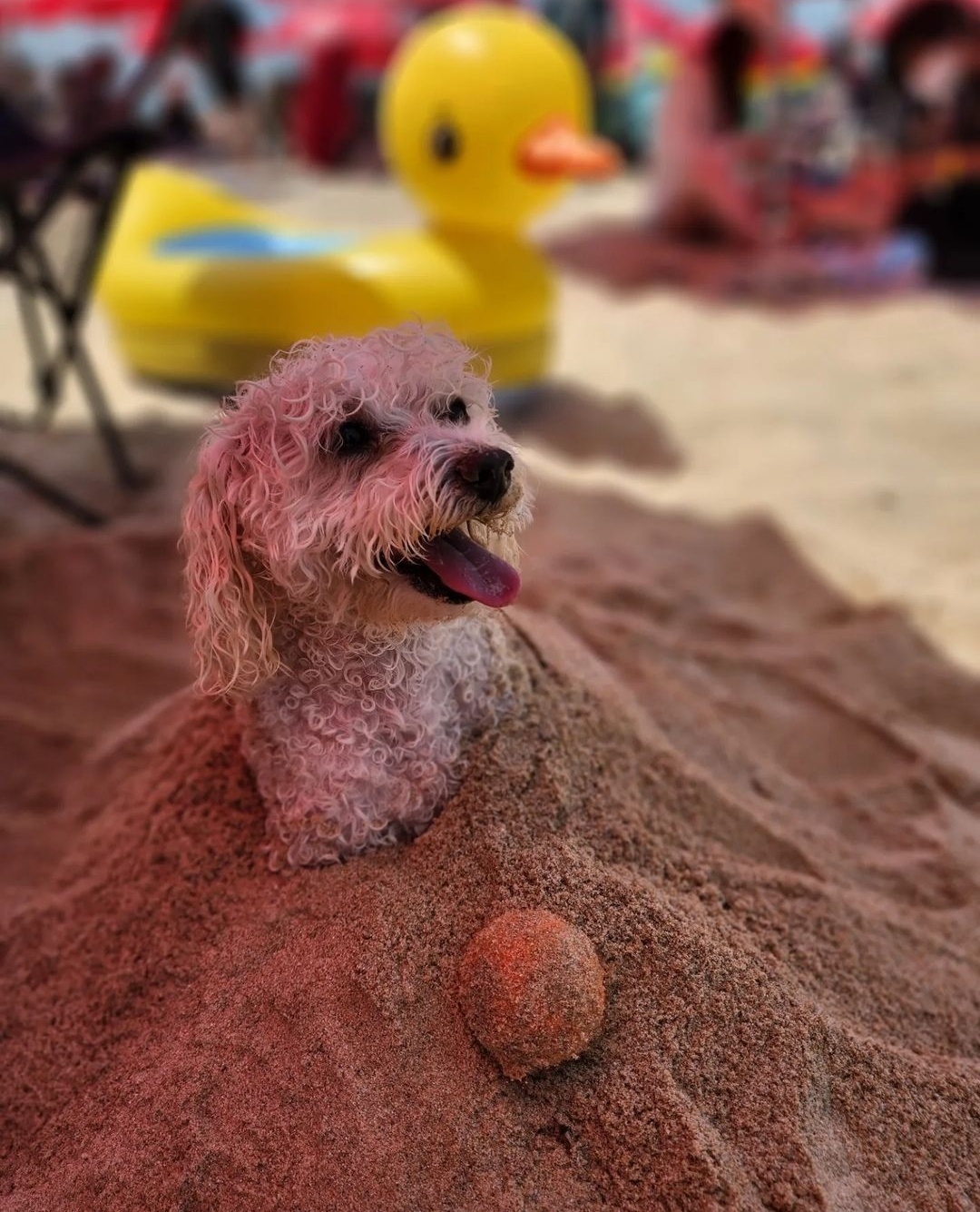 Mango the poodle visits Meong Beach in Gangwon Province on July 9. (Courtesy of Lee)
Seven-year-old Mango the poodle is a beloved companion to Lee He-yong, 40, who brings his dog everywhere, even when he goes hiking. For his summer vacation early this month, Lee went to Meong Beach, situated on the East Sea coast, which allows people to come with their dogs.

“It was my second time visiting the beach with my dog. In general, many beaches do not allow dogs because people complain about it. But Meong Beach has a lifeguard and is equipped with things that you may need for dogs at the beach,” Lee said.

Meong Beach in Yangyang County, Gangwon Province, is among a growing number of pet-friendly places in a country where 6.38 million people, as of 2020, live with at least one companion animal. Among them, 82 percent own a dog. 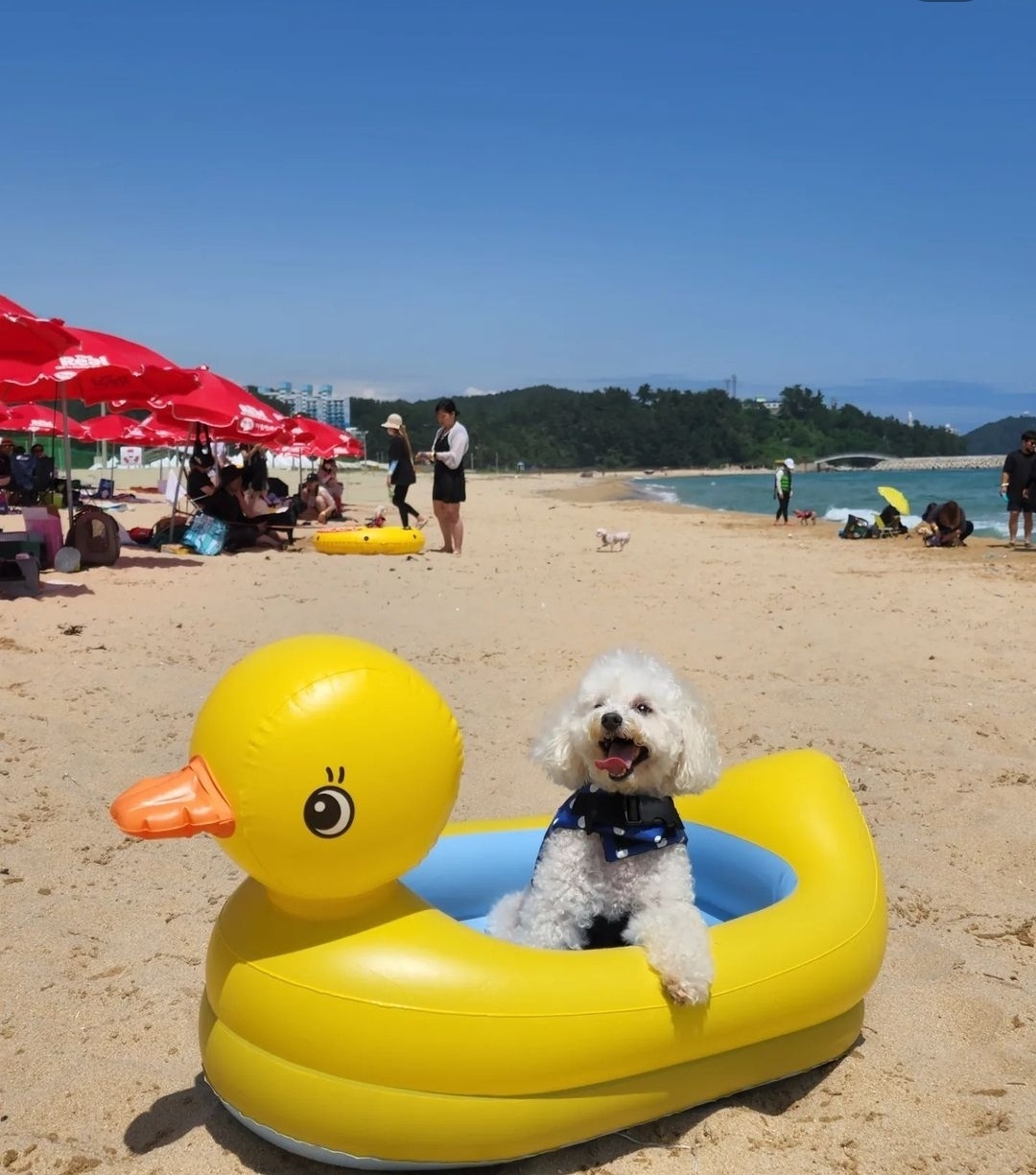 Mango the poodle visits Meong Beach in Gangwon Province on July 9. (Courtesy of Lee)
Kim Nam-sun, head of Gwangjin village in Yangyang County, has been operating Meong Beach for about seven years.

A number of hotels promote packages that draw pet owners for summer vacation. The term “petcance,” a combination of “pet” and the French word for vacation, is widely used here as more and more hotels open to accommodate pets as well. Sheraton Grand Incheon Hotel launched the “Sheraton Petcance” package in June that features in-room dining for dogs and their owners as well as dog-friendly hotel amenities. Four Seasons Hotel Seoul has been allowing pets to stay since its opening in 2015.

“We were aware of the growing need of customers because the hotel is located near Songdo Central Park where people bring their pets for a walk. There are many inquiries about the package,” said Noh Rayna, marketing communications supervisor at Sheraton Grand Incheon Hotel. 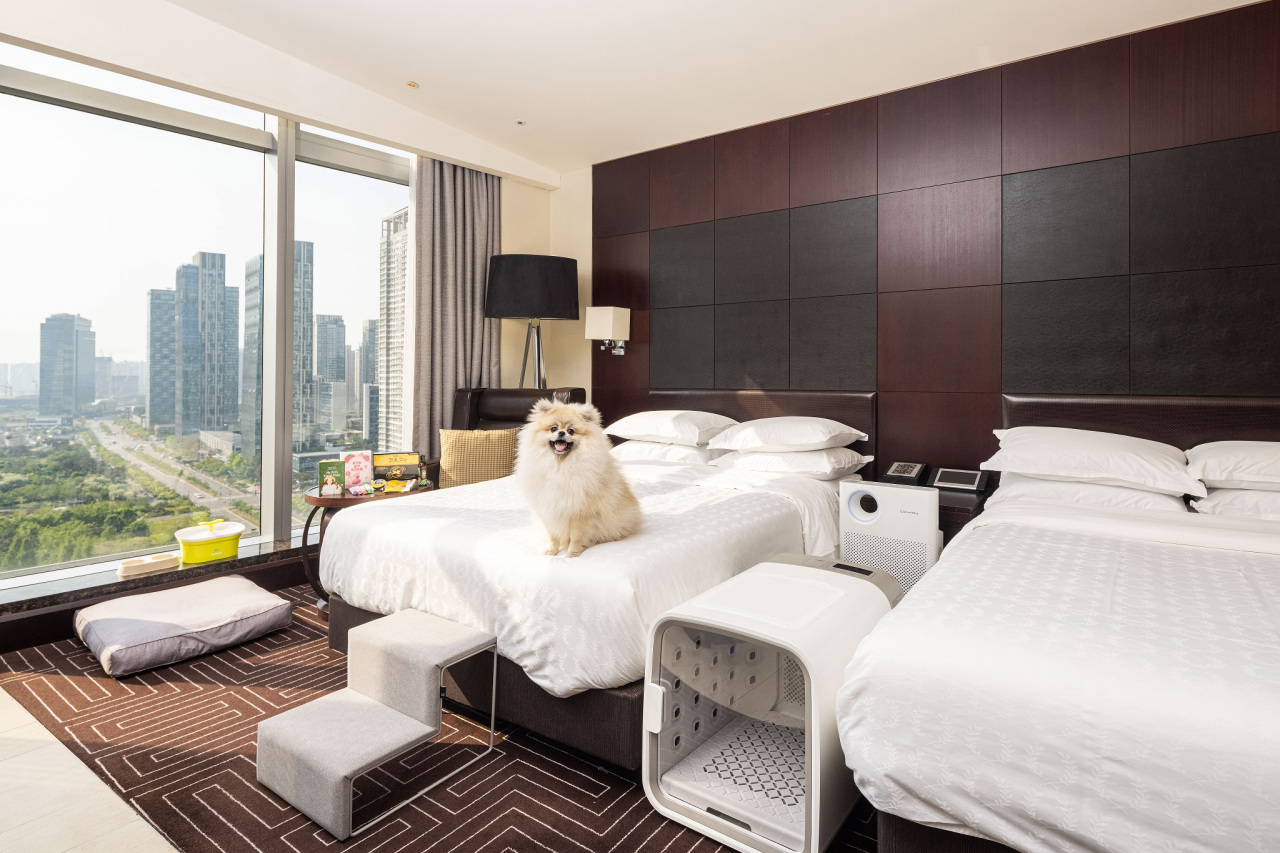 Sheraton Grand Incheon Hotel has launched a package “Sheraton Petcance” for those who want to spend summer vacation at the hotel with their dogs. (Sheraton Grand Incheon Hotel)
The pet industry is a fast-growing one. It is estimated to become a 6 trillion won ($4.58 billion) market in 2027 with annual growth of 14.5 percent, according to the Korea Rural Economic Institute.

Elsewhere around Korea, travelers with pets also like to head to the abundant animal-friendly cafes and restaurants on Jeju Island. Pension accommodations located in the outskirts of Seoul, such as Gapyeong and Yangyeong in Gyeonggi Province, are also popular during vacation season.

A survey conducted by the Korea Tourism Organization released this year shows 43.9 percent of 2,006 pet owners saying they prefer traveling to places where they can enjoy nature and their dogs can play off-leash, and pensions were most popular as they typically have more space.

While the pet population in Korea has grown, a huge gap still remains between pet owners and non-pet owners when it comes to expectations about pet behavior, which sometimes leads to confrontations in public spaces.

According to the same KTO survey cited earlier, only 30 percent of respondents who do not own pets answered that pet owners have good manners, or “petiquette,” while 80 percent of pet owners said they have good petiquette themselves. Petiquette includes management of noise levels, hygiene and pet owners’ manners, such as keeping their pets on a leash.

A resident surnamed Jeong in Hongje-dong, northern Seoul, agreed that pet owners have been able to keep their dogs under control for the most part, but she still sees dogs let off the leash at parks or cafes from time to time.

“I know many people love dogs because they are cute, but I am not that type of person. I am scared even of little puppies,” Jeong said.

A 33-year-old office worker who lives in Seoul said she thinks all dogs should wear a muzzle regardless of their size.

“A large dog passed by me the other day. The owner would say their dog is nice, but I am still scared,” said the Seoulite. “Also I don’t like how people dump pet waste in a plastic bag in the trash.”

When the city of Gangneung, Gangwon Province, opened the first dog beach in 2013, complaints about noise and hygiene issues from residents led to the city closing off the beach to dogs after a few years. The beach now only allows people. “We have 16 beaches in Gangneung. They do not accept dogs,” said an official from the city.

“While an increasing number of people are accepting of dogs, we do not have many opportunities to be educated on raising dogs,” said Lee Sol-i, a professor at Tongwon University’s department of companion animals in Gyeonggi Province. “There is no standard petiquette that both pet owners and non-pet people share in common and agree on together.” 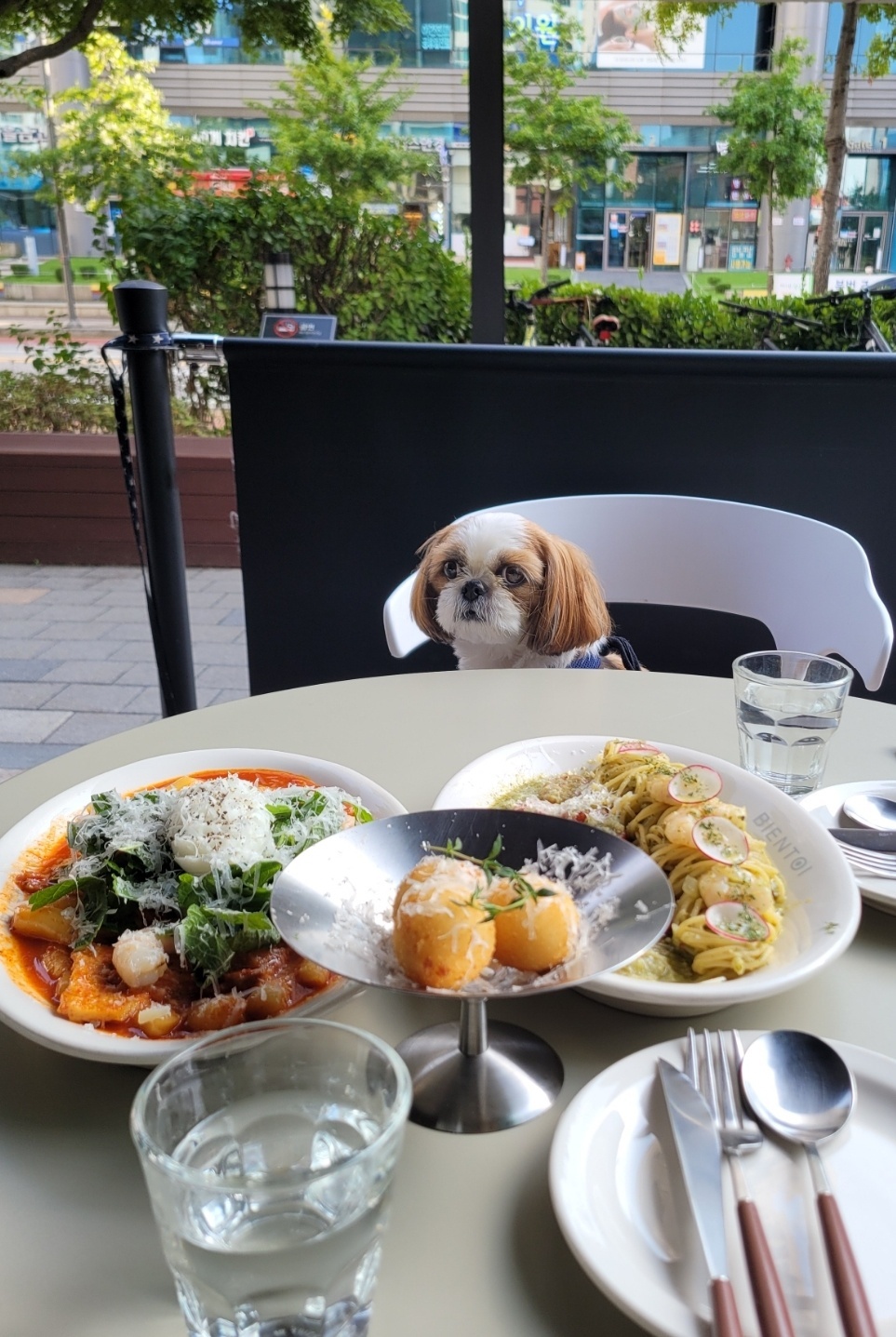 A Shih Tzu sits with its owners outside Bientoi, a brunch restaurant in Pangyo, Gyeonggi Province, on June 17. (Park Yuna/The Korea Herald)
Choi Hye-jin, who raises a Maltese in Seoul, said she does not know what people without pets expect when it comes to having the right petiquette.

“If pet manners are about holding the leash properly, I am doing fine. But to be honest, the term ‘petiquette’ itself sounds like it favors non-pet people.”

Seo Myung-ki, a professor at Keimyung University’s department of companion animal health in Daegu, said there is a lack of a system that fosters communication between pet owners and non-pet owners. By communicating with each other, it could enable better understanding between the two sides so they can find ways to live together.

“The conflicts are about communication problems. Pet owners do not exactly know what makes others uncomfortable when pet manners are mostly about leash and dog waste at the moment,” Seo said. “Also many dogs in South Korea lack sociability owing to the owners’ scant knowledge of dogs or because they live in apartments. We need to require more education for pet owners when they adopt dogs.”