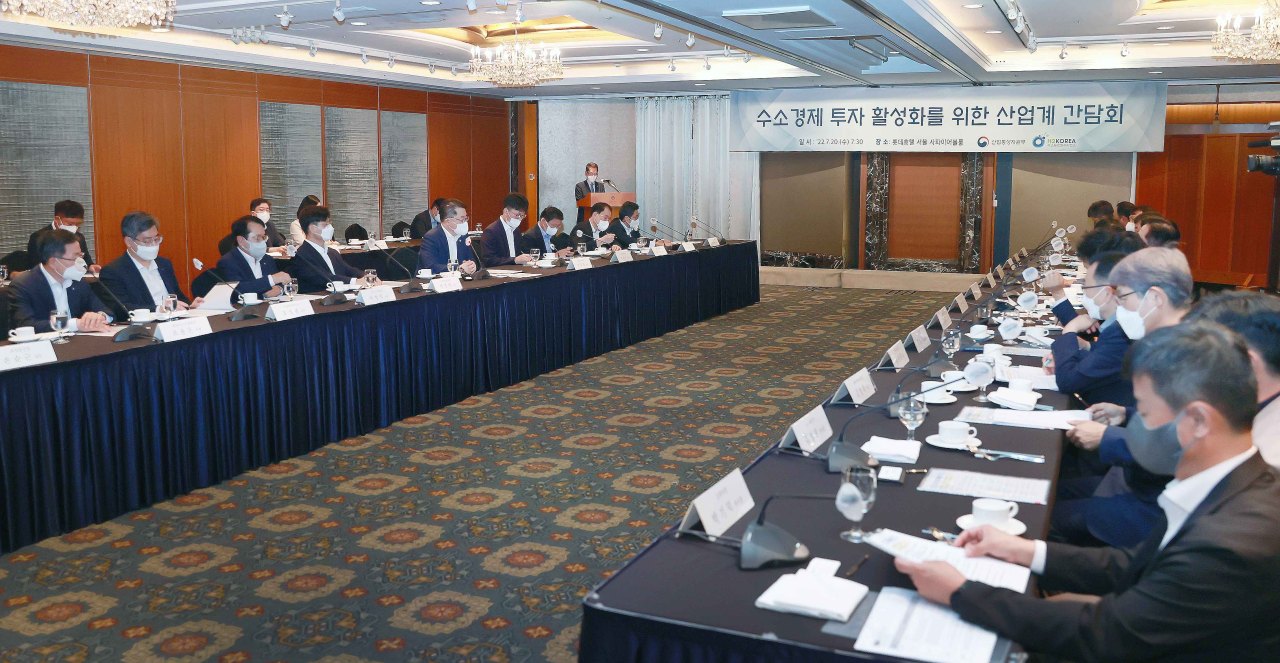 Park Il-joon (fifth from left), the second vice minister of the Energy Ministry, presides over an industrial meeting with energy companies at a Seoul hotel on Wednesday. (Yonhap)
South Korea’s Ministry of Trade, Industry and Energy said Wednesday it is implementing a new clean hydrogen certification system from 2024 that evaluates corporate carbon footprints based on the amount of carbon emissions, not the type of production process.

The new scheme will determine whether hydrogen can be classified as “low carbon” by analyzing the amount of carbon generated during its production -- the lower the emissions, the greater the incentives for companies.

Thus far, the Korean government has evaluated hydrogen performance based on the production process. However, industries have called for a revision to the method to better reflect the carbon footprint.

During Wednesday’s industrial meeting, the Energy Ministry said it is working on the new plan by reviewing various hydrogen production methods and international trends, with plans to unveil the draft in 2023.

During the meeting, energy companies also suggested that it is necessary to combine existing gas stations and liquefied petroleum gas charging stations with hydrogen charging infrastructure for better consumer accessibility.

The ministry responded that it would discuss related regulatory issues in order to ease entry hurdles in the nascent period of the hydrogen market.

The ministry also reaffirmed its will to introduce the Clean Hydrogen Portfolio Standards that obligate energy companies to use clean hydrogen with lower emissions from next year. The new scheme is scheduled to be launched next year under the nation’s carbon neutrality goal that aims to reduce carbon emissions by 40 percent from the 2021 level.