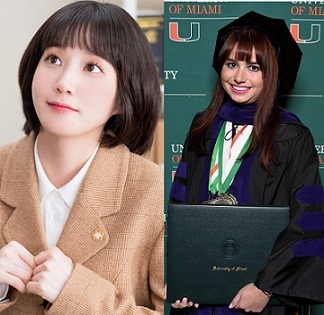 Showing Woo tackle difficult cases as she grows as a lawyer, while overcoming adversity and prejudice, the 16-part legal drama from television channel ENA was the most watched non-English TV show on Netflix during the week of July 11-17.

For most viewers in Korea, where the show is set, the life and career of the lovable autistic genius is widely regarded as a fantasy.

But the story of Haley Moss, who in 2019 became Florida‘s first practicing lawyer with autism, shows that autistic lawyers like Woo can become a reality. 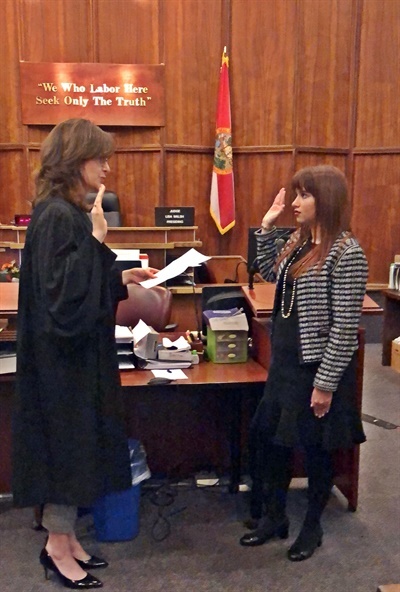 Haley Moss was sworn in to the Florida Bar on January 11, 2019.(Courtesy of Haley Moss)
Moss was just 3 years old when she was diagnosed with autism. Doctors said she might never fully speak, and she would be lucky to graduate high school.

Ten years later, she was nothing the doctors said she would be. At age 13, she wrote a guidebook for middle school students with autism and spoke as a panelist at the Autism Society of America Conference.

Now, she introduces herself as the first autistic lawyer known to be sworn into the Florida Bar, author of several books and advocate for people with disabilities.

Moss, who said she watched the first episode of “Extraordinary Attorney," thinks that there probably are autistic lawyers in Korea, just none that are "openly autistic" like her.

She mentioned one scene in the drama where Woo’s fellow lawyers cared more about a written notice saying she‘s autistic than the fact that she graduated top of her law school class, adding this is something that she experienced in her workplace.

"Some people who have autistic kids had treated me like a little kid, not as one of their colleagues. Even though I went to the same law school, passed the same bar exam and met the same qualifications for the profession, I often felt that I had to prove myself more to get the same respect and opportunity that anybody else is getting," Moss said.

She noted that some autistic traits, including sensory overload and struggle with prioritizing, might have led the coworkers to become skeptical of her abilities as a lawyer.

"I’m sensitive to noise, so I always wear large noise-canceling headphones just as the attorney Woo does in the drama. Little kids‘ cries and screams make me anxious. With a sensory overload, I feel like my body is trembling to fight the noise off. I keep saying to myself, 'I have to get out of here.' I always try to find somewhere quiet," she said.

Other than wearing headphones to avoid distractions, Moss could also relate to Woo’s routine of only eating gimbap (seaweed rice roll) for her meals and her intense fascination with whales.

"She eats a lot of the same food every day. That's something that I do. Her passion for whales makes her really excited. This kind of obsessive joy is something I experienced a lot from drawing," she said.

Her artworks had been featured in galleries throughout South Florida. Some of her works, influenced by pop art and anime, were sold at auction in 2020 to benefit the University of Miami and Nova Southeastern University's Center for Autism and Related Disabilities.

Autism as a strength

Some of her autistic symptoms turned out to be a great advantage in her profession, Moss said.

It is her near-photographic memory as well as an exceptional ability to connect people, places and things that set her apart from other lawyers.

"When I worked as an associate with Zumpano Patricios law firm in Miami, I mostly dealt with international law cases, which always had so much information. Having to be able to recall detailed information and being able to know what dots to connect were very helpful," she said.

When it comes to relations with certain clients, her experiences were also a plus.

"Those who have similar life experiences as me tend to have trust in me. I can relate with them better than other lawyers do. Also, I tend to break things down when talking about a case and this made some clients understand legal terms better," she said.

Having changed her autism into her unique ability, Moss has been called an "openly autistic" lawyer because of her writing and speaking publicly about her experiences.

"(Being openly autistic) basically means I'm very forthcoming about my autism. Being open makes me realize I don't have to act like somebody else to get accepted. I can be myself."

"If we all hide our autism, how can we expect to experience true acceptance and inclusion?"

What she found interesting about the drama was that Woo was not just there to teach somebody life lessons about people with disabilities.

"In the drama, Woo messes up, learns and grows along with others. What usually happens in media is that we focus on autistic people who don't seem like humans with full personalities and interests. We don’t get the same opportunity," she said.

For an accurate media representation of people with disabilities, she believes there should be more autistic people getting involved in the media production process.

"I'm so glad that the Korean media has created a show (about autism) for s Korean audience and viewers all over the world. We need more positive portrayals of (autistic people). I'd love to see some autistic actors, perhaps in another season, or more in the show," she said.