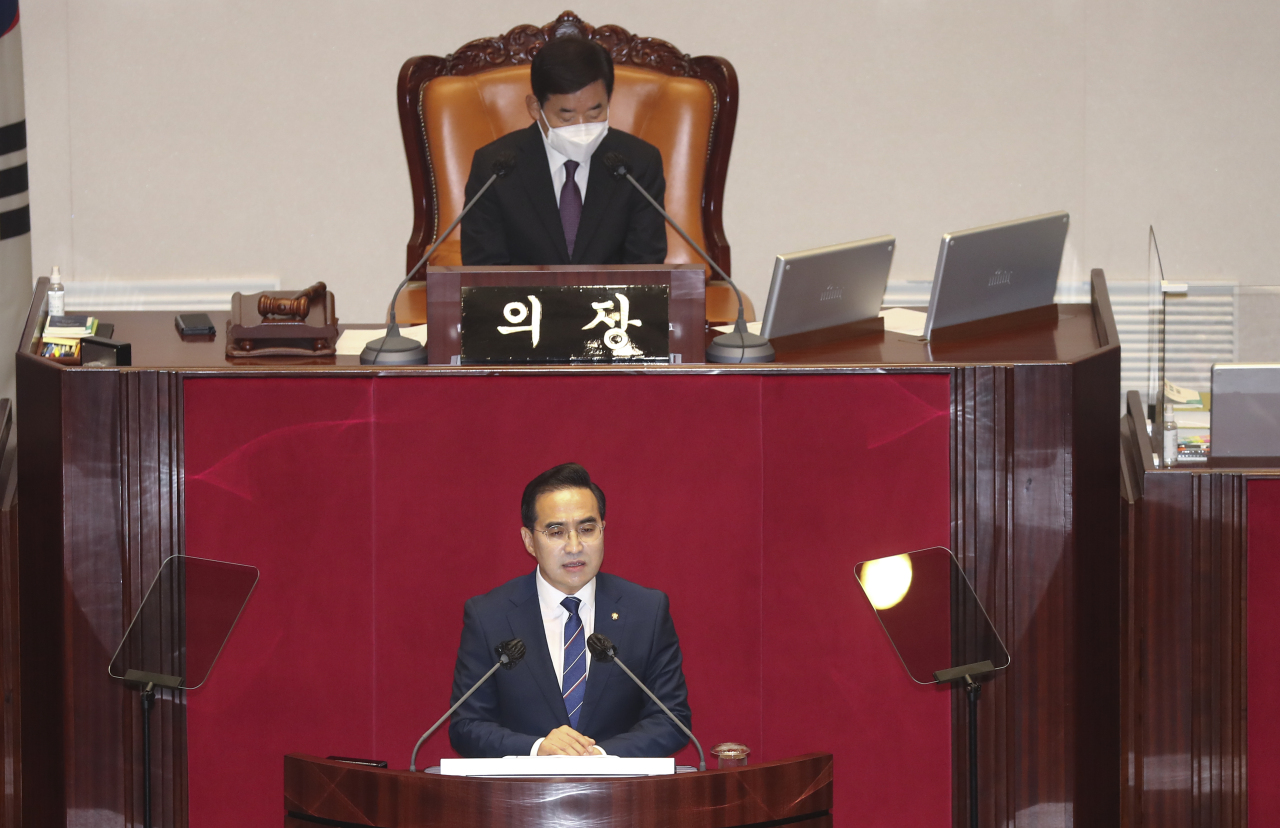 Rep. Park Hong-keun, floor leader of the main opposition Demcoratic Party of Korea, gives an address at the National Assembly on Wednesday. (Joint Press Corps)
The National Assembly’s official proceedings kicked off Wednesday, with the familiar sound of the two main parties accusing each other of failing the people.

South Korea’s main opposition Democratic Party of Korea heavily criticized the Yoon Suk-yeol administration for its controversial personnel decisions while denouncing the government for abusing its power for political purposes.

Rep. Park Hong-keun, floor leader of the Democratic Party, said Wednesday that the Yoon administration must focus on serving the people instead of waging political revenge. His remarks were part of a speech that marked the opening of the second half of the 21st National Assembly.

“That means around a third of the people who cast their vote for candidate Yoon Suk-yeol in the presidential election have withdrawn their support. There are also forecasts the support rating will fall below 30 percent soon.”

Park denounced Yoon for failing to heed to the opinions of voters, saying his lack of regard to support ratings is a sign of his reckless attitude toward the presidency. He urged Yoon to care for essential needs of the people, saying the new administration has not shown much meaningful progress.

“For the two-month transition period after the presidential election, the people did not hear much about what the new government will do and how it will respond to the difficult economic situation,” the floor leader said.

“The only thing we remember is moving the presidential office to Yongsan, which was forced through with a will to not spend a single day in Cheong Wa Dae even though it could have been carefully reviewed and pursued.”

The president found himself in another personnel controversy last week after a sister of a far-right YouTuber staging abusive protests in front of former President Moon Jae-in’s residence was found to have worked in the presidential office.

Yoon’s second cousin was also found to have been working as a senior administrator equivalent to a post held by a grade three civil servant in the new presidential office. Many have said personnel problems are a major factor leading the decline of Yoon’s ratings.

“Corruption of the family, close relatives and aides of the president brings misfortune not only to the administration but also to the whole country,” Park added.

“During the Park Geun-hye administration, the orchestration of Choi Soon-sil that nullified the personnel system of Cheong Wa Dae led to unprecedented impeachment of the president.”

The floor leader urged Yoon to stop “privatizing” the presidential authority, asking him to pay attention to the voice of the people and strictly manage those around him. He added that Yoon should stop focusing on pursuing political vendetta on Moon and his aides.

“I strongly ask President Yoon, the government and the ruling party to return to the basics of running an administration,” Park said.

“I ask to focus on the economy and lives of the people more than anything else. The main opposition Democratic Party of Korea is willing to cooperate with any actions set to take care of the economy and people’s livelihoods.”

The ruling People Power Party hit back, saying that the new government has only been in place for about two months, and that the Moon Jae-in administration is responsible for the difficulties the country faces today.

“A sincere acknowledgement and apology must be preceded based on the fact that today’s risks on the economy and people’s lives came from failures of economic policies of the Moon Jae-in government,” Rep. Kweon Seong-dong, floor leader and acting chairman of the People Power Party, told reporters Wednesday.

“It is wrong to blame the Yoon Suk-yeol government that only launched about two months ago as if it brought the troubles we are going through today.”