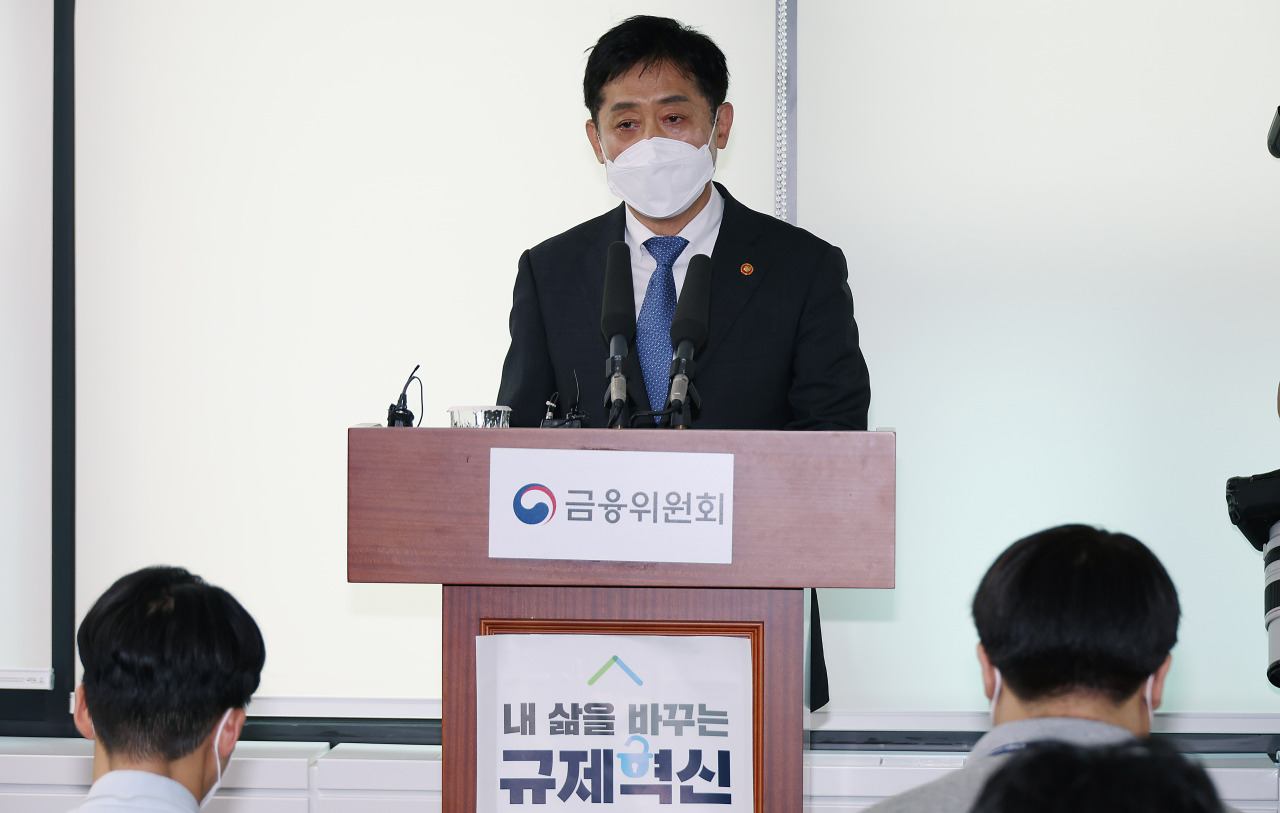 Kim Joo-hyun, chairman of the Financial Services Commission, speaks during a press briefing at the government complex in Seoul on Monday. (FSC)
South Korea’s top financial regulator said Monday that its plan to help low-income earners reduce their debt burdens does not encourage reckless investments in stocks or real estate, amid criticism that young Koreans who have made losses from such investments could repay debts with taxpayers’ money.

“We’re not helping those who have had to cut their losses on stocks and cryptocurrencies to pay for loans (taken out for investment),” Kim Joo-hyun, chairman of the Financial Services Commission, told reporters, four days after his agency revealed a debt relief plan, which many saw as including such investors.

The plan – part of a larger government relief package for a “vulnerable group” of young Koreans fresh out of college, self-employed people and small business owners amid rising interest rates – involves offering them better loan deals and extending their repayment periods.

Young Koreans who had taken out loans at lower rates to buy stocks and digital currencies now find themselves troubled, economically and psychologically, the agency said last week when it unveiled the plan, referring to people usually aged between 19 and 39.

That prompted a public outcry over whether it was fair to help reduce such debts, when the agency could put its resources, including taxpayers’ money, to better use by aiding Koreans facing a life crisis like COVID-induced bankruptcy, which warrants more immediate assistance.

“The way we described the situation facing the younger people, I think, could spark concerns over moral hazard … we were just trying to convey the urgency,” Kim said, noting the agency will reduce their interest and not the principal balance after screening them thoroughly.

Government spending that will be used to make that happen does not contradict what the Bank of Korea is trying to achieve, Kim added, referring to the central bank’s efforts to tame unruly inflation. The bank raised borrowing costs by a record level last week.

“The bank has its goals and we, on the other hand, are doing our job of helping those most in need so we can prevent a bigger crisis,” Kim said.

Later in the afternoon, Kim met with the central bank governor and discussed working closely on policy coordination, the agency said in a statement, noting the two chiefs, who met together for the first time, called harmonization of monetary and financial policies the top priority.