[ The Korea Herald – Send E-mail ]
[Seoul Subway Stories] Tidbits and tales behind jaw-dropping growth of Seoul subway
By Yoon Min-sik
Published : Jul 18, 2022 - 17:27
Updated : Jul 18, 2022 - 17:32
Seoul currently boasts one of the longest metro systems in the world, exceeded in length by only seven regions including Shanghai, London, Moscow and New York.

What started out as a single line system in 1974 has expanded exponentially to nearly 300 kilometers connecting some 300 stations scattered across 11 lines, not counting the nine additional routes like the Suin-Budang Line that connects the capital with its satellite cities.

Building mass public transit systems has been a national project, but what has been driving it is a collective desire of Koreans to get closer to the beating heart of the country’s economic boom, where all the shiny skyscrapers stand and jobs abound. The boost to property prices from having a station nearby has also boosted enthusiasm for subway development.

After shooting out in almost every direction at a dizzying pace, Seoul’s cobweb of tracks also bear signs of poor planning, political pork barreling and collective selfishness on the part of local residents. 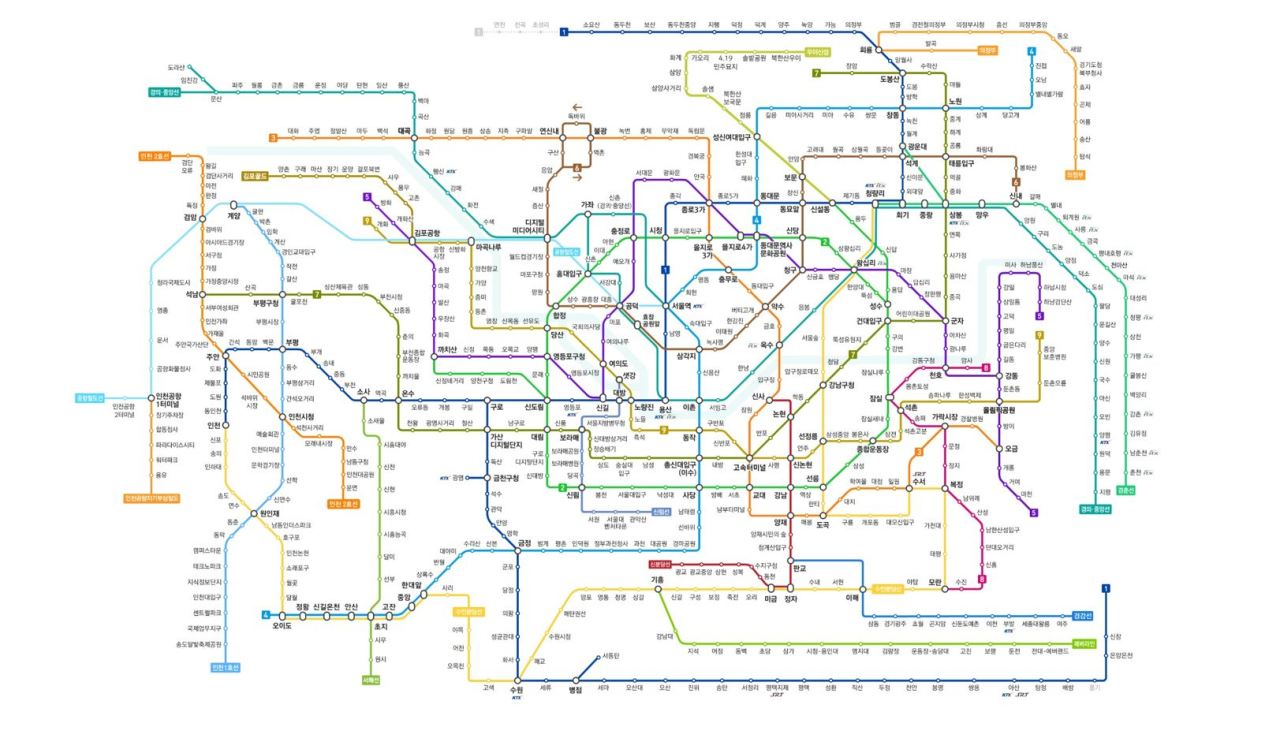 A map of Seoul subway as of July


Gaepo-dong, Gangnam-gu, is one of the most populous and wealthiest regions in Seoul, but it features one of the least populated subway stations in the country’s capital.

Guryong Station, which according to Korea Railroad Corp. logged an average of 3,132 daily users in 2021, is one of three stations that has earned the deprecatory nickname “Gangnam village metro” for their low number of users and being located just a block away from each other. The two others are Gaepo-dong Station and Daemosan Station. These stations are located so close that you can actually locate both Gaepo-dong Station and its more-popular neighbor Dogok Station (Line No. 3) on the map inside Guryong Station that shows its nearby surroundings.

Dogok is also literally a block away from Daechi Station on line No. 3, which again is a block away from Hangnyeoul. While both Dokok and Daechi are located in populated areas and each have nearly 20,000 daily users, just 3,521 a day used Hangnyeoul in 2021.

How this part of Seoul came to have stations so close to each other is a testament to what political meddling can do in city planning.

The original plan, which dates back to the early 1980s, was to construct just one subway station in the Gaepo-dong area, bypassing the then relatively less-populated Daechi-dong area. But a pledge during a 1987 presidential race by the eventual winner Roh Tae-woo resulted in the plan being switched to building the station in Daechi-dong, which naturally sparked fierce protests from Gaepo residents.

It did not stop there. While the city’s plan was to construct just one station, Gangnam-gu District Office strongly demanded that Seoul add more stations in the area.

Between residents’ complaints piling up and the pressure of the presidential pledge, the city eventually decided to take the Oprah Winfrey approach: Everyone got one.

In 2021, the three stations of Gaepo-dong combined had a little over 15,000 daily users in one of the most populous districts in Seoul. This roughly equates to the number of daily users at Dogok or Daechi station, making one wonder if putting three instead of one station in Gaepo-dong was worth the years of quarrelling and the taxpayers’ hard-earned money.

Gangnam village metro, however, was not the only nor the last case of politics interfering with subway planning. 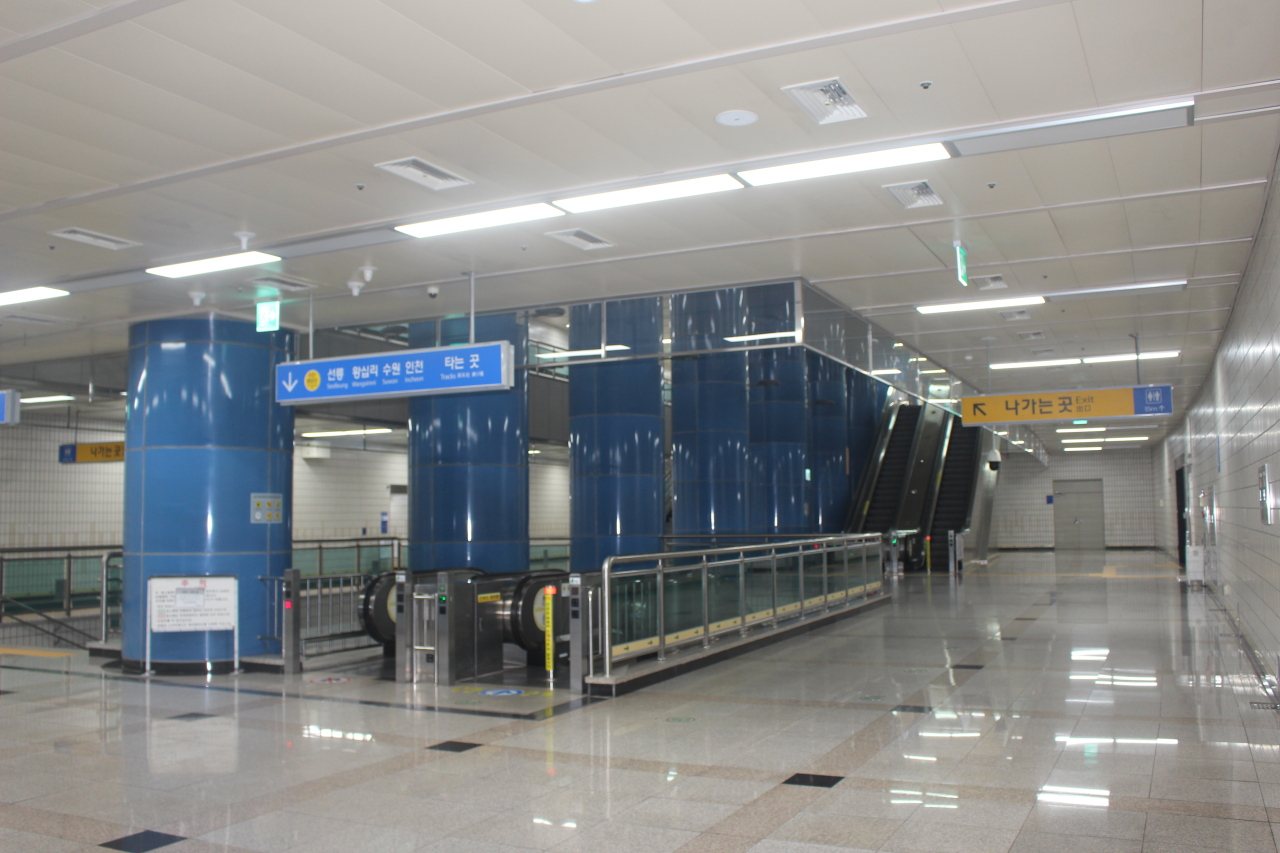 Prior to the local elections in June, now-Hanam Mayor Kim Sang-ho pledged that he would extend Seoul Metro Line Nos. 3 and 9 to the Gyeonggi Province city, as part of his plan to boost his city’s transport links. Like other cities in the greater capital region, Seoul metro has been extending its reaches into Hanam -- namely the inauguration of the Line No. 5’s Hanam route.

Expansion of the subway stations in Seoul and the adjacent cities has often been sparked by pledges by politicians. Prior to the parliamentary elections in 2020, 85 percent of the candidates for Seoul legislative seats made subway or railway related pledges, including the supposed creation of 32 new stations and six subway lines.

A year later, the by-election for the Seoul mayor post had two rivals both pledging swift construction of the light rail transit systems for the northern part of the city. The winner of the race, Oh Se-hun had to defend his post in this year’s local elections against the main opposition Democratic Party’s Song Young-gil, who also pledged to expand subway provision in the northern region.

While announcing his pledge, Song pointed out that there was a disparity in infrastructure between the northern region and more affluent areas south of the river: two-thirds of “dong” level districts in Gangnam-gu and Seocho-gu have three or more subway stations, while the figure is 15 percent for Gangbuk-gu and 11 percent for Nowon-gu districts.

Building a subway line is among the most effective way to attract investment in a certain area, and often leads to a rise in real estate prices. According to recent reports, the sale price of Misa Riverview Zai Apartment in Seon-dong, Hanam recorded an all-time high after news was reported of the imminent extension of Line No. 9 to the adjacent Misa-dong area.

An analysis of the 805,188 apartment sales in 2020 by real estate app Zigbang showed that the only two regions in the city with an average sale price surpassing 2.5 billion won ($1.9 million) were each in Gangnam-gu and Seocho-gu: Apgujeong-dong at 2.9 billion and Banpo-dong at 2.6 billion. Other well-connected Gangnam regions of Daechi-dong and Dogok-dong were respectively ranked No. 4 and No. 6.


Despite being the most populous district in Seoul with over 250,000 residents, Sillim-dong has long suffered from lack of subway systems connecting its northern and southern parts, resulting in it being subject to some of the worst traffic in the city. A popular running joke among students of Seoul National University was that the “biggest idiot in SNU is one that gets off the Seoul National University Station (on line No. 2) to go to SNU,” as despite its name, the station is over 1.8 kilometers from the school’s main gate.

Ground was broken for the Sillim Line in 2016, and trains commenced operations this year, connecting the 11 stations spanning across the 7.8 kilometers from Yeouido to Gwanaksan (Seoul National University) Station, which mercifully is only 350 meters from the school.

The shortest line in the Seoul metro completes its run in just 16 minutes, but offers a long-awaited alternative to the area’s often congested roads.

Despite being a privately funded project, with the private sector shouldering half the costs while the state and city government paying for the other half, the fare is the same as the other lines operated by the state-owned Seoul Metro.

But unlike Sillim line, the privately-built Shinbundang Line has controversies related to its fares.


Subway lines in the Seoul metropolitan area basically adopt a system of charging a basic fare -- 1250 won as of 2022 for the first 10 kilometers -- and charging additional fees the further you go.

But Shinbundang Line has a far more complex charging system. It has different operators for all three of its sections, which each charge an additional fee.

One of the biggest complaints from the passengers is the notorious “fare jump” which can catch a person off guard when he or she unwittingly crosses over sections. A three-station ride from Sinsa to Gangnam on the Shinbundang line costs 1,750 won, but when one goes just a station further to Yangjae -- which is operated by a different firm, the fare jumps to 2,750 because of the additional 1,000 won-fee charged by the operator.

Traveling the full 33.7-kilometer trip from Sinsa Station in Gangnam-gu to Gwanggyo (Gyeonggi University) Station in Suwon, Gyeonggi Province, on this line will set you back 3,640 won.

In comparison, a slightly shorter route of 31 kilometers from Seolleung Station to Singal Station on the neighboring and similarly-named Suin-Bundang Line costs 1,650 won. In fact, a 57.4-kilometer trip from one end of line No. 3 to the other costs 2,050 won.

But for those living in outskirts of Seoul and commuting to the city, particularly in Suwon, where Gwanggyo Station is located, a 40-minute subway ride to Gangnam instead of an over-1-hour bus ride in morning rush hour has its appeal. This is possibly why the Shinbundang Line was able to charge over 1,000 won more than the bus fare for the same route.