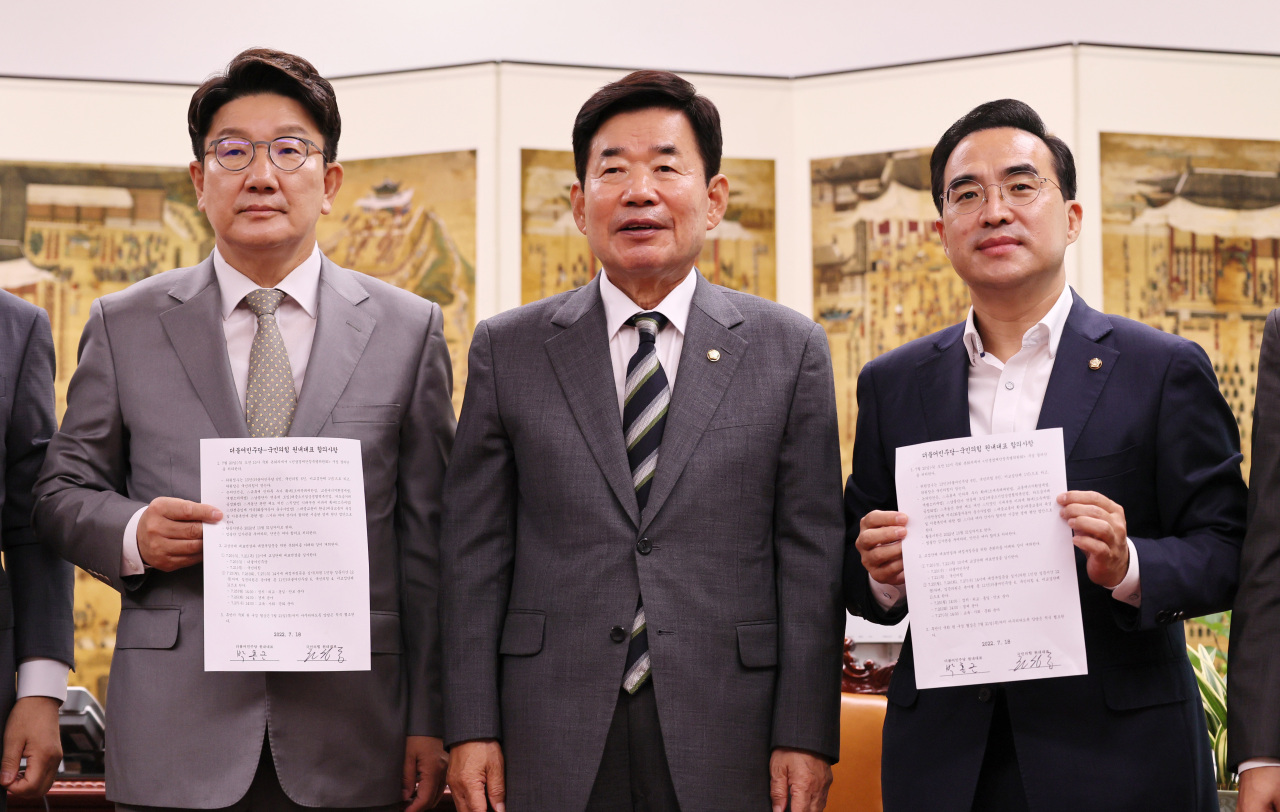 Rep. Kweon Seong-dong (left), floor leader of the ruling People Power Party, poses for a photo Monday with his counterpart Rep. Park Hong-keun (right) of the main opposition Democratic Party of Korea and National Assembly Speaker Kim Jin-pyo (center) in announcing a promise to finalize negotiations on naming new legislative committee chairs by Thursday. (Joint Press Corps)
South Korea’s rival parties vowed to finalize negotiations on naming new committee chairs of the National Assembly by coming Thursday as they are keen to have the legislative branch fully return to work after being deadlocked for more than a month.

Floor leaders of the ruling People Power Party and main opposition Democratic Party of Korea on Monday morning agreed to extend the timeline for negotiations for four more days after the two failed to reach a deal by Sunday as promised before.

The parties look to finalize the composition of the new legislative leadership by then to hold a three-day-long period of questioning on the Yoon Suk-yeol administration on state affairs next week. The questioning spans all major areas, including diplomacy, economy, education and culture.

The two parties also agreed to hold speech sessions to officially open doors to the 21st National Assembly, with the Democratic Party, having a majority in the legislative branch, holding its speech on Wednesday to be followed by the People Power Party on Thursday.

Negotiators also agreed to hold a plenary session on Wednesday to enact a measure to open a special legislative committee on people’s livelihoods and vote on how it will be composed. The committee will be headed by a People Power Party legislator and will have 13 associated members.

Yet chances remain for the negotiations to stay stalled over differences in views, as they have done since the terms for the previous committee chairs ended in late May. The parties only succeeded in electing a new National Assembly speaker and made no further official progress.

The parties failed to meet their self-imposed deadline of returning to work in the Assembly by Constitution Day, mainly because of fighting over which party should chair the Science, ICT, Broadcasting and Communications Committee as well as Public Administration and Security Committee.

The parties have so far agreed to let the People Power Party control the Legislation Judiciary Committee while the two parties jointly participate in a special committee for prosecution reform as proposed by the Democratic Party.