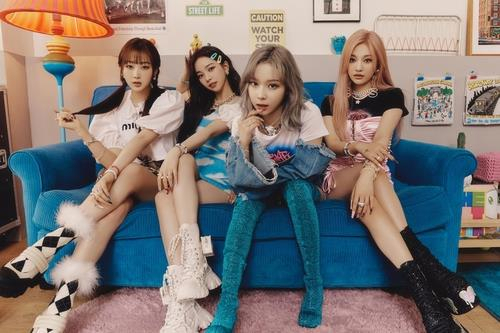 k"Girls," the second EP from South Korean girl group aespa, landed at No. 3 on US Billboard's main albums chart.

Billboard has said in an article Sunday (US time) that the quartet reached the milestone on the upcoming Billboard 200 chart for this week by earning 56,000 equivalent album units in the United States.

"Girls" became the second highest-charted album by a K-pop girl group after BLACKPINK hit No. 2 with its first full-length album "The Album" in 2020.

Billboard 200 ranks the most popular albums of the week in the US, measured by equivalent album units, comprising physical album sales and other digital sales records.

The EP has a total of nine tracks, including the title track of the same name; the English and Korean versions of "Life's Too Short," the band's first English-language single prereleased on June 24; and three other new songs, "Illusion," "Lingo" and "ICU."

Last year, aespa rose to global attention by debuting at No. 20 on Billboard 200 with its first EP "Savage."