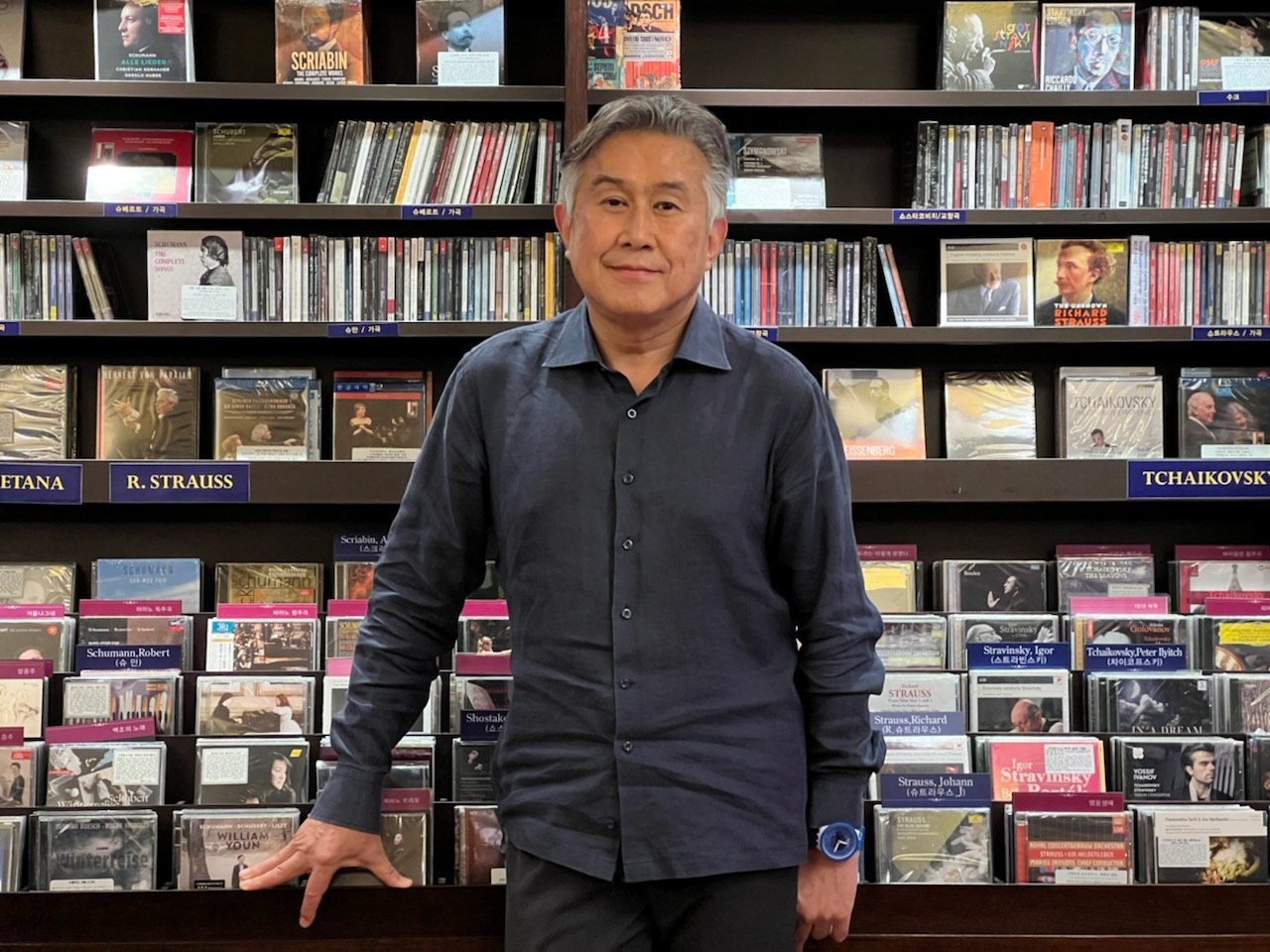 Pungwoldang founder Park Jong-ho poses for a photo after an interview at his record store in Sinsa-dong, Gangnam-gu, Seoul, Monday. (The Korea Herald)
In a corner of Sinsa-dong in Seoul’s Gangnam district, there’s a nearly two-decade-old record store dedicated to classical music.

With a collection of more than 200,000 CDs and vinyl records as well as some 3,000 books on the world’s greatest musicians and music history, the shop – Pungwoldang – is not an ordinary shop. It is a salon, school and publishing house for classical music aficionados and musicians.

But above all, owner Park Jong-ho, 62, wants it to be a place where people come to find good music, particularly in this age of digital distribution.

“I have been a classical music lover since I was a kid, and I thought that someone should maintain a place where people can appreciate music,” he said in an interview with The Korea Herald at his store.

Before opening Pungwoldang in 2003, he was a psychiatrist.

In 2003 alone, some 3,000 record stores shut down across South Korea, as online shopping and MP3-based distribution of music changed the way how people consumed music.

To Park, the change of the medium and means of how people enjoy music doesn’t matter much, although CDs and vinyl are considered analog compared to convenient digital streaming services.

“The most important thing is the content -- classical music, which itself exerts a powerful influence on human beings,” he said.

Instead of waiting to be swept up by the wave of digital disruptions, Park set a business strategy to help his customers take a deep dive into classical music and maximize the joy of listening to music.

As part of his strategy, Park and four music experts started giving occasional lectures about composers, music pieces and the history, philosophy, literature and messages. The sessions have now moved online in the aftermath of the COVID-19 pandemic.

At a small concert hall located on the second floor of the shop, musicians hold showcase events from time to time.

Pungwoldang has published some 60 books under its own brand, including Park’s 2021 book “For those of you who are new to classical music,” which has sold more than 10,000 copies.

“The system is designed to create synergy. You buy a book if you can’t understand what the music is about. If you attend a class, you want to listen to more music that you learnt from the class, so you buy another record,” he said.
Breaking misguided perceptions about classical music is also needed for beginners, Park said.

Some people think classical music is art for the upper class, but it is quite the opposite.

“Key composers were those who were marginalized and fought to liberate music from aristocracy,” he said.

Until the first half of the 19th century, aristocrats were the patrons and consumers of classical music and musicians. But Ludwig van Beethoven had a rebellious spirit and never kowtowed to the aristocracy.

For example, Beethoven employed the “Ode to Joy” text written by the German poet Friedrich von Schiller in the final movement of his Ninth Symphony. It symbolizes fraternity and equality among the peoples of the world.

Gioachino Rossini delivered the revolutionary ideas about the lower class in the opera to an upper-class audience. Wolfgang Amadeus Mozart deviated from the path of a comfortable court musician and chose to live a hard life on his own, he added.

“Most musicians after Beethoven not only focused on the aesthetic value of classical music, they also incorporated its social functions and human values,” he said. “So listening to their music means learning their great thoughts.”