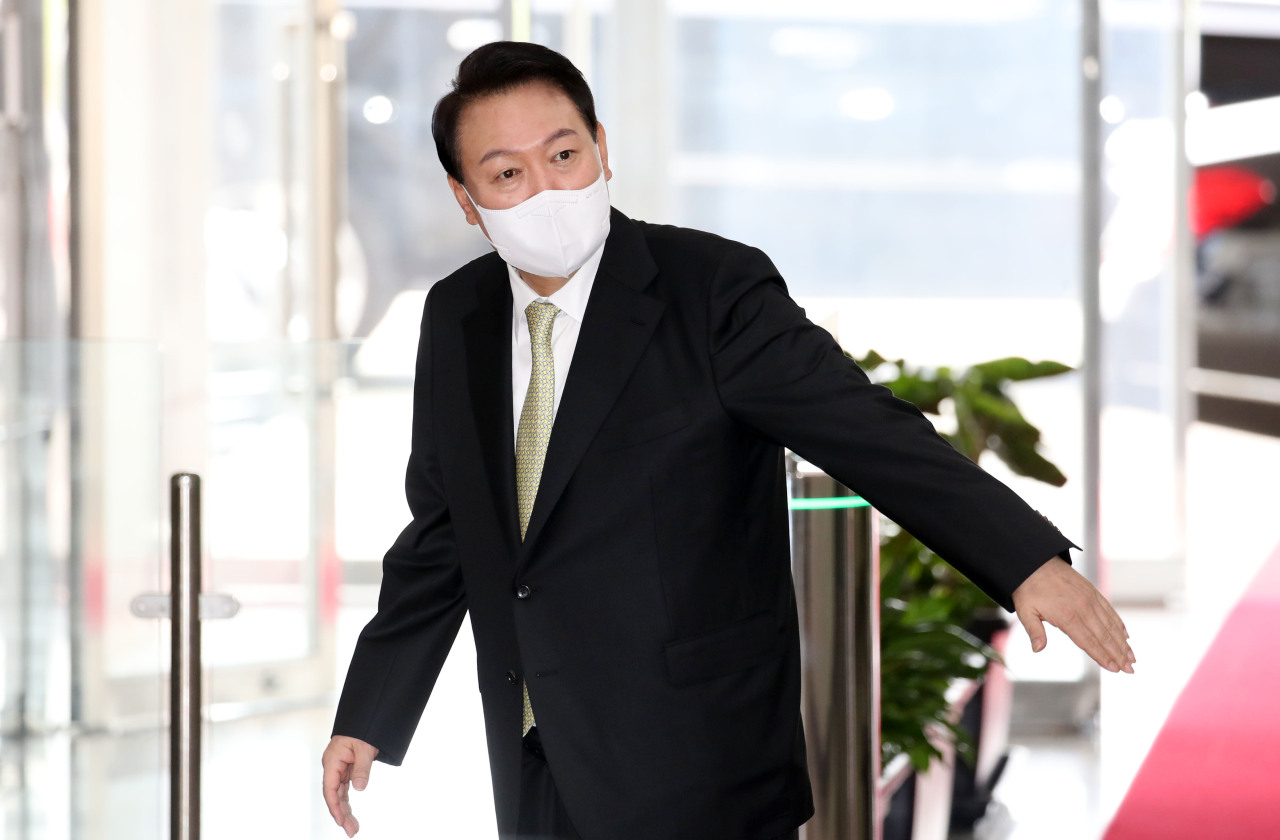 President Yoon Suk-yeol exchanges greetings with reporters after arriving at his office in Yongsan-gu, central Seoul, on Tuesday. (Joint Press Corps)
South Korean political circles are again reviewing whether to pardon political and business figures en masse ahead of Liberation Day next month.

While the presidential office has made no official comment on the matter, calls are rising to grant pardons for former President Lee Myung-bak and Samsung Electronics Vice Chairman Lee Jae-yong on Aug. 15. Granting them pardons would be beneficial to the economy, some have argued.

Prime Minister Han Duck-soo officially brought the idea to the table this week, commenting that granting pardons for big economic figures would be in line with presidential authority. It would help economic figures expand their scope of business and make more investments, he said in a forum Wednesday.

“Granting pardons for economic figures is an administrative authority given to the president,” Han said.

“I don’t think it’s too far off from the eyes of the people and our economy to positively review granting pardons if they are believed to have suffered enough from penalization,” he added.

Some have added that Lotte Group Chairman Shin Dong-bin could be added to the list of possible pardon grantees. He was sentenced to 2 1/2 years in jail and four years of probation in connection with manipulation of state affairs and corruption in late 2019.

President Yoon Suk-yeol is widely expected to grant a pardon for Lee Myung-bak during his five-year term, as he has repeatedly mentioned looking into it positively during his presidential campaign earlier this year.

Some figures in the country’s ruling People Power Party openly demanded the president to consider granting pardons to these key figures, saying these pardons are needed to bring the country together and achieve unity. Presidents have usually granted pardons to key figures in their first year for that purpose, they argue.

If these pardons are given on the upcoming Liberation Day, they can serve as “a foundation of unity and economic growth,” Hong added.

Rep. Kweon Seong-dong, floor leader and acting chairman of the People Power Party, also commented last month the mass pardon should be reviewed, as it was customary for new presidents to do so in the early months of their presidency.

The opposition bloc is expected to pressure Yoon and the ruling bloc to additionally grant pardons for former South Gyeongsang Province Gov. Kim Yung-soo. Kim, a close aide to former President Moon Jae-in, was sentenced to two years in prison last year for conspiring to manipulate online opinions ahead of the 2017 presidential election.

The presidential office told reporters Wednesday it cannot comment on whether granting pardons for the Liberation Day is under review.