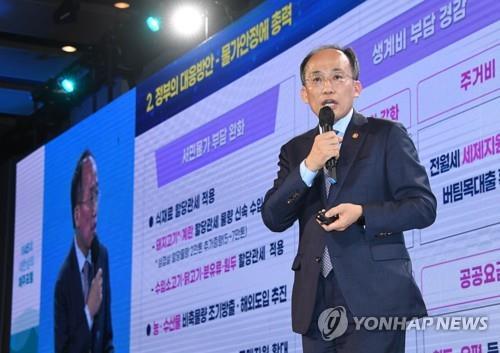 South Korea's chief economic policymaker said Wednesday that he is gravely concerned about a possible recession after soaring inflation stabilizes.

His remarks came after the Bank of Korea raised its policy rate by a half percentage point, the largest-ever increase, earlier in the day to combat high-flying inflation.

"(The BOK's rate hike) will help rein in rising expected inflation down the road," Finance Minister Choo Kyung-ho said in a forum held in Jeju. "In October, consumer prices may stabilize, and our next concern may be economic recession," he said.

The finance minister emphasized that his task is to balance inflation against economic recession.

The central bank raised its benchmark interest rate by 50 basis points to 2.25 percent although it expects this year's economic growth to be below its forecast of 2.7 percent in May.

It represented the first time borrowing costs have been elevated for three consecutive months.

South Korea has been grappling with fast-rising inflation pressure amid soaring energy and commodity prices caused by rebounding demand following the pandemic and protracted supply chain disruptions that have been exacerbated by the ongoing war in Ukraine.

The country's consumer prices, a key gauge of inflation, soared
6 percent last month from a year earlier. It was the sharpest price increase since a 6.8 percent jump in November 1998, when South Korea was in the midst of the 1997-98 Asian financial crisis.

In May, the BOK revised up its 2022 inflation growth projection to 4.5 percent from 3.1 percent three months earlier and recently said the pace could be faster than earlier anticipated. (Yonhap)