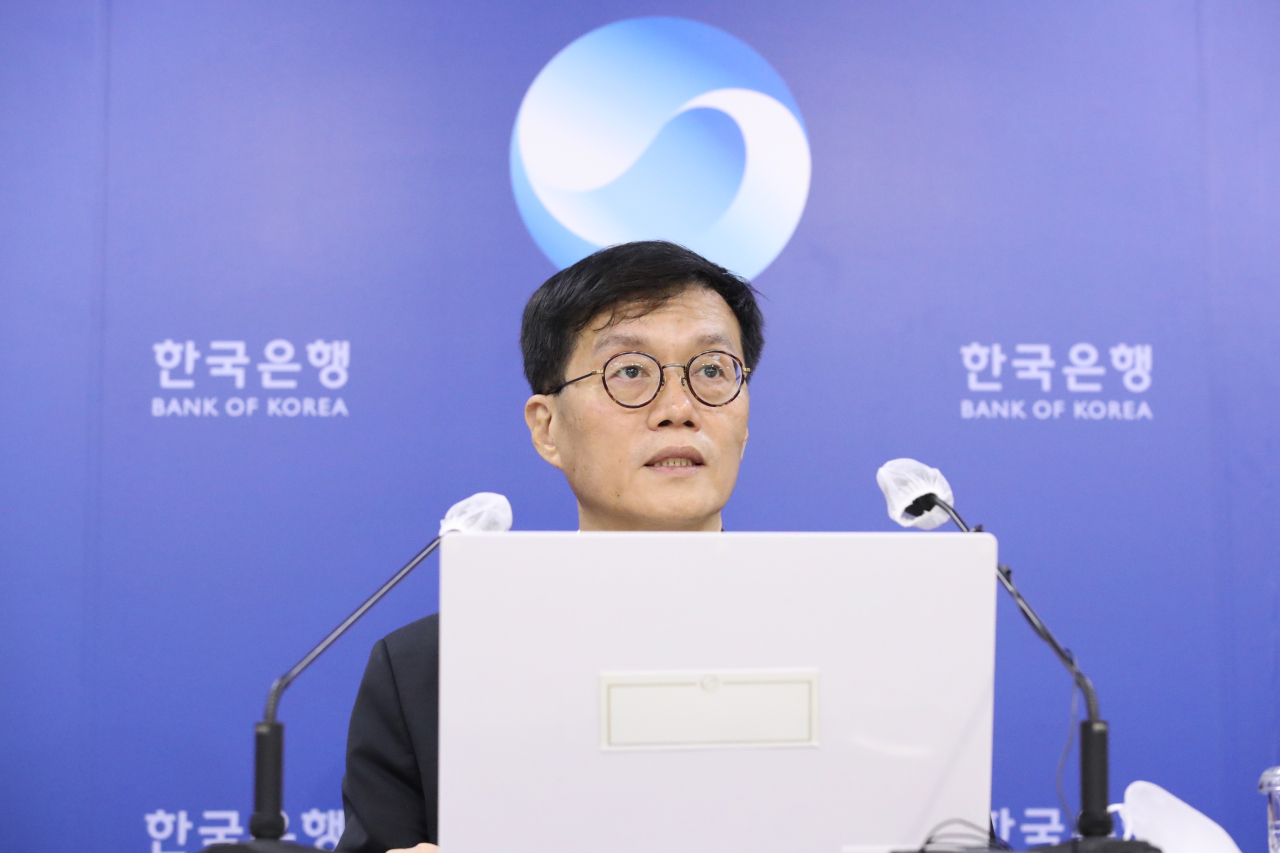 Bank of Korea Gov. Rhee Chang-yong speaks during a press briefing about the central bank’s decision to raise the benchmark rate by 50 basis points, the biggest increase since 1999, at the BOK headquarters in Seoul on Wednesday. (BOK)
The Bank of Korea delivered a half-point interest rate hike Wednesday, the biggest increase since 1999, to tame unruly inflation, despite growing concerns the move could trigger soaring debt burden and an abrupt economic slowdown.

The hike, which comes after inflation hit a 24-year high of six percent in June and takes the current policy rate to 2.25 percent, adds strain to the world’s highest household debt that amounts to a little over 104 percent of Korea’s gross domestic product, while threatening to dampen growth.

“Considering inflation and economic conditions, though economic downside risk is indeed high, uncertainties remain elevated, and thus the Board sees it as important at this time to curb the spread of inflation expectations,” the central bank said in a statement.

BOK Gov. Rhee Chang-yong told reporters shortly after the decision that he expected prices to peak late in the third quarter or early in the fourth quarter this year, betting on a protracted price slowdown.

The bank has warned that a prolonged crisis in Ukraine, China’s COVID-19 lockdowns and rising global food insecurity could worsen inflation, saying the export-led economy would have to deal with higher prices and a bigger hit to its industrial output.

Korea’s exports snapped 15 months of double-digit growth in June, prompting the finance minister, who doubles as deputy prime minister, to call a meeting of economic chiefs a week ago, where policymakers promised extra loans to help exporters.

Rhee, who dismissed concerns over stagflation, a coupling of low growth and high prices, said economic growth would reach a mid-2 percent range this year and a little over 2 percent next year. The targets fall short of what the bank has previously said.

But an immediate shift in policy would not take place even if growth were to slow below 2 percent, Rhee added, saying borrowing costs are not determined by simple math. Earlier, the top banker said multiple factors shape a rate decision, while still acknowledging that inflation is a top priority.

“When inflation is running at 6 percent and the inflation outlook stands at 4 percent, the first thing to do is cool down prices,” Rhee reiterated his stance on inflation Wednesday, referring to the June inflation and the consumer inflation expectations made in the same month.

The latest rate decision – which also marks the first time the BOK supported a hike at three consecutive board meetings in April, May and July – comes as major economies such as the US and Canada accelerated tightening.

The US central bank signaled that its rate would rise to 3.4 percent by year-end, and the Bank of Korea would have to back the bigger-than-usual raise at least two times at the three remaining board meetings this year to top the target to avoid a capital drain fleeing for better interest rates.

“We have to let it sink that we could lose the rate premium. Precedents show we had had a difference,” Rhee said, noting the gap had reached as high as one percentage point.

Most analysts forecast the BOK rate to reach 2.75 percent by year-end, with some betting on as high as 3 percent, which would bring the Korean and US rates within one percentage point of each other. The range of 2.75 percent to 3 percent does not seem blown out of proportion, Rhee noted.