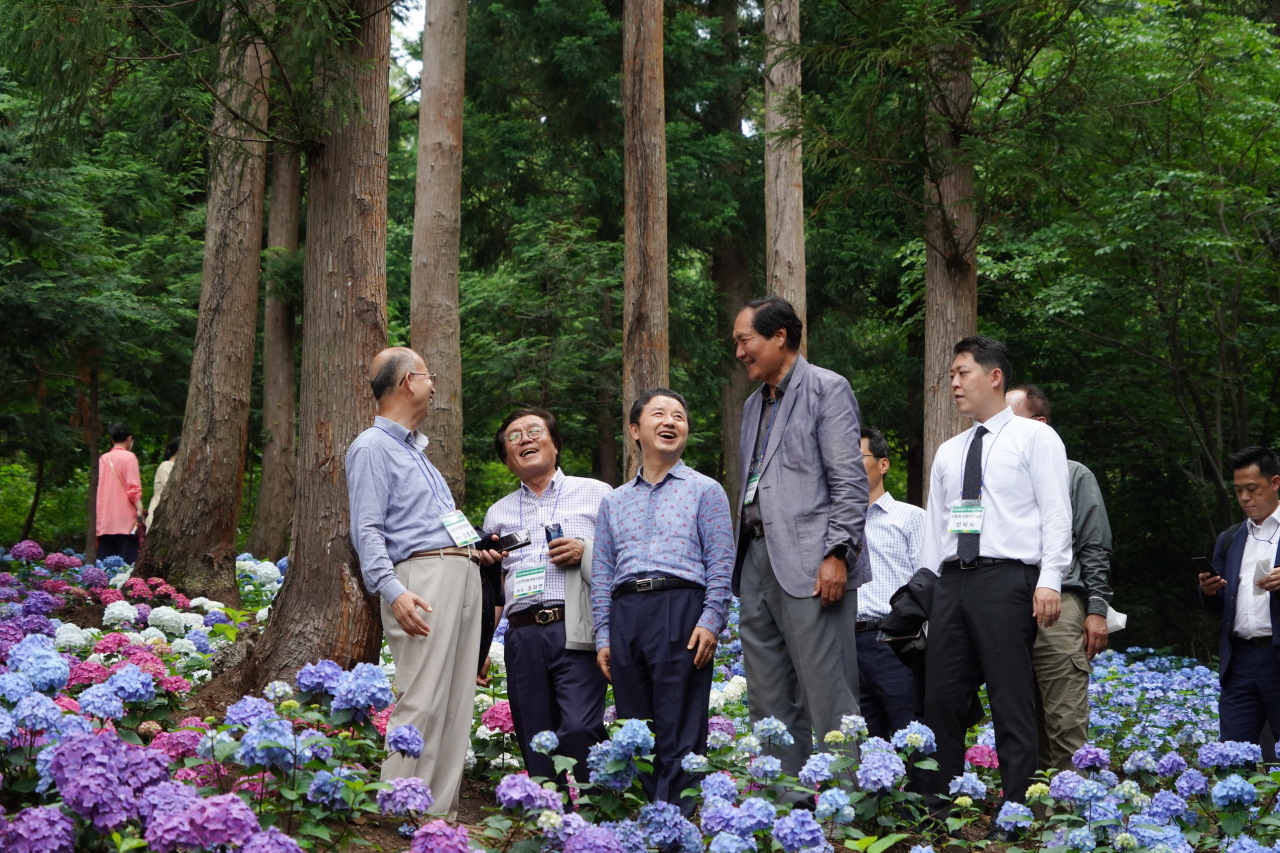 KFS Minister Nam Sung-hyun is seen participating in a seminar held on June 23 to bolster forestry management in Boseong, South Jeolla Province. (KFS)
Having succeeded in reforestation through nationwide tree-planting campaigns in the 1970s, South Korea has been a role model in forest restoration for many developing nations, and is now internationally recognized for sustainable forest management.

In a 2020 study by the UN Food and Agriculture Organization’s Committee on Forestry that compared nations’ growth of forest resources per hectare between 1990 and 2015, South Korea showed the highest growth among countries in the Asia-Pacific region at 196 percent.

“There is also a lot of demand for cooperation regarding Korea’s advanced forest recreation and forest welfare policy,” Nam Sung-hyun, the new minister of the Korea Forest Service, said in an email interview with The Korea Herald. Nam, a forestry scholar and official of 40 years, took office in May. 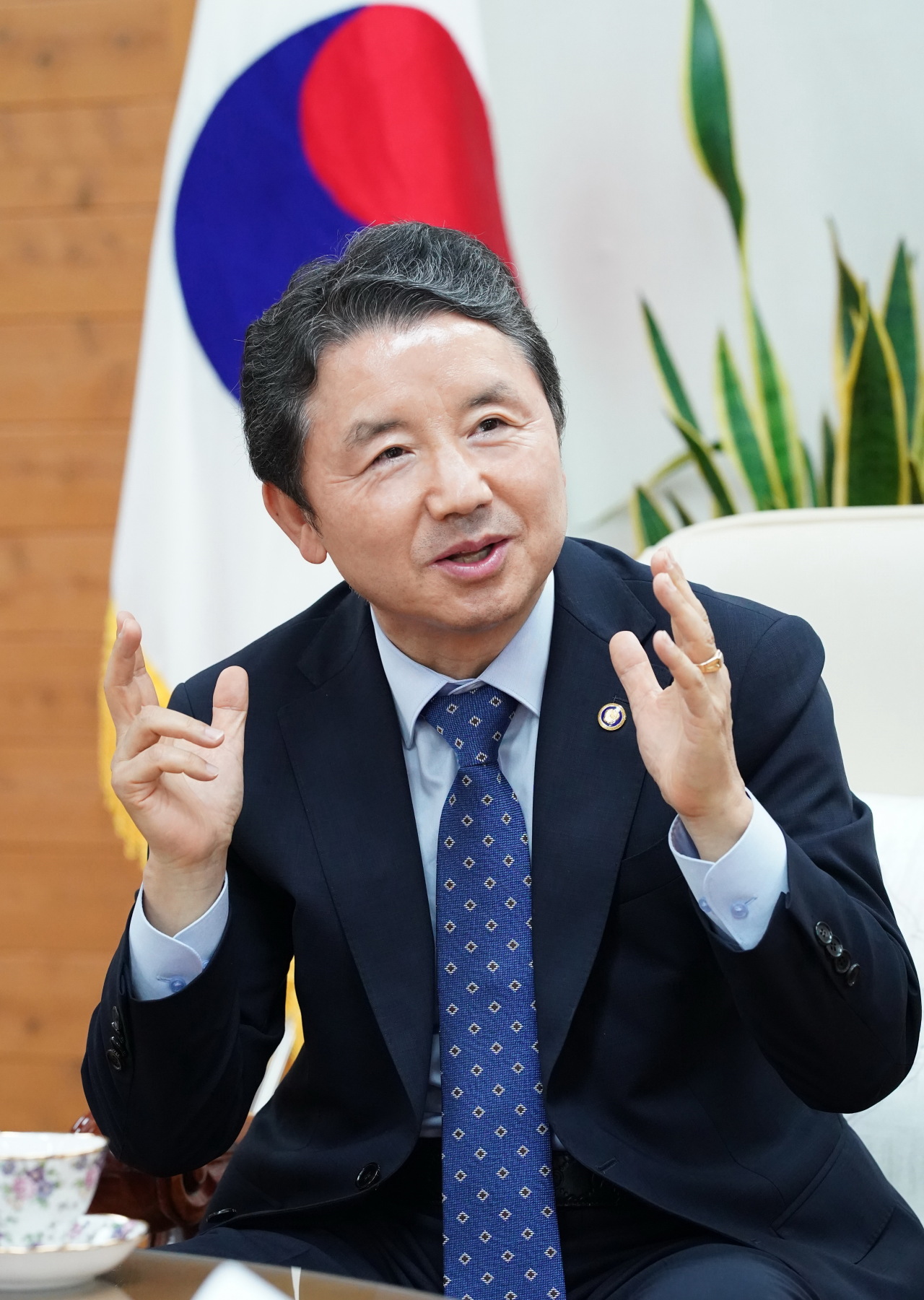 Korea Forest Service Minister Nam Sung-hyun (KFS)
“The KFS has helped build forests for recreational use in Indonesia’s Lombok and Cambodia to help the local economy while conserving forests. We are also sharing know-how on forest education programs,” Nam said.

In May, Korea and the FAO hosted the 15th World Forestry Congress in Seoul, drawing some 15,000 representatives of governments, international organizations, research organizations and businesses from about 160 countries.

Nam said the launch of “Assuring the Future of Forests through Integrated Risk Management,” or “Affirm,” a program for sharing Korea’s forest fire control system with developing nations, was another major outcome of the congress.

As part of its growing international efforts, South Korea -- along with 11 other members of the Organization for Economic Cooperation and Development’s Development Assistance Committee, which includes the US and the UK -- signed a Global Forest Finance Pledge to expand official development assistance up to $12 billion for tropical countries around the Congo Basin over a five-year period until 2025.

In addition to joining various forest initiatives of the UN Convention to Combat Desertification, the Convention on Biological Diversity and the FAO, Korea launched the Asian Forest Cooperation Organization (AFoCO), of which 16 Asian countries including observers are current participants.

“To share our reforestation experience and advanced information and communication technology for forestry, we have also signed bilateral agreements for forest cooperation with 37 countries, starting with Indonesia in 1987.”

This year, South Korea will provide 18.8 billion won ($14.3 million) in overseas development assistance to six countries and through nine international organizations to rebuild forests damaged by fires in Mongolia, restore mangrove forests in Vietnam and prevent desertification and support villagers’ income in Tajikistan, among others, the minister said.

Although Korea is an example of success in reforestation, it still has a long way to go in terms of utilizing and industrializing timber resources, compared to countries like New Zealand or Canada.

As of late 2020, Korea imported about 84 percent of its timber demand, or about 28 million cubic meters.

“For a stable, long-term supply of timber, the KFS has helped companies secure afforestation sites abroad through cooperation with other governments, and offered loans for companies investing in forestation,” Nam said.

“As a result, South Korean companies completed overseas afforestation projects spanning a total of 530,000 hectares, or about 8.8 times the size of Seoul, by late 2021,” he said, adding that about 3.42 million cubic meters of timber from the overseas tree-planting projects were brought into Korea for industrial use.

As up to 30 percent of the world’s timber products are estimated to be illegally logged, the KFS has implemented a law that requires timber importers to prove that their timber products were legally produced.

The KFS has also developed guidelines to help companies certify the legality of timber products from some 70 countries, and is working closely with other governments and international organizations to better support small and medium-sized businesses and tackle nontariff barriers.

“However, document screening isn’t enough to completely prevent damage to the local industry. So we plan to analyze the anatomical and biological information of (timber) products, compare them with the reported information and identify the risks of illegal logging in each country to improve local regulations,” the minister said.