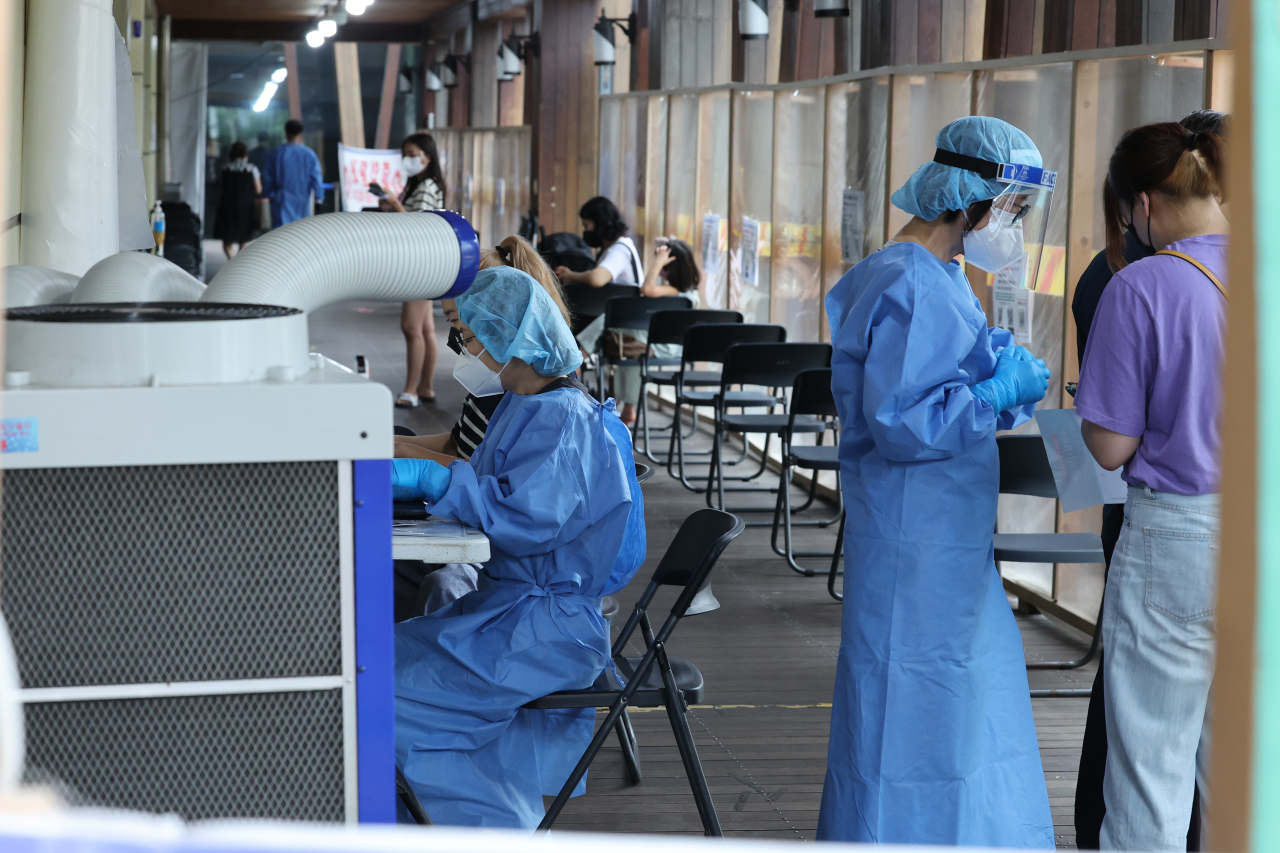 In a televised news conference Wednesday morning, top health officials stressed that social distancing will not be making a comeback.

Peck Kyong-ran, Yoon’s first Korea Disease Control and Prevention Agency commissioner, said, “Social distancing won’t be mandated like it had been in the past.”

She said that the country’s growing portfolio of vaccines and treatments as well as expanded hospital capacities, among other factors, provided grounds for navigating the BA.5 phase without making social distancing compulsory -- continuing the “living with COVID-19” strategy taken by the prior administration.

On April 18, South Korea dropped the bulk of its social distancing restrictions, more than two years after they were first introduced, and has not restored them since. The only remaining COVID-19-related restrictions include an indoor masking policy and the seven-day isolation requirement for patients with a confirmed infection.

Peck said that instead of enforcing social distancing for all South Koreans, people at high risk of severe illness will be given priority access to medical resources. Starting next week, eligibility for fourth doses of COVID-19 vaccines, so far offered only to people aged 60 years and older, will open up to people in their 50s as well.

South Korea recorded 40,266 cases in the 24 hours ending Tuesday midnight, the highest figure since April 30 in the aftermath of the devastating omicron surge that hit earlier this year. In the past week the seven-day average of new cases more than doubled to 24,115 from 11,946 seen the preceding week.

This time it’s BA.5 that is seizing hold. Roughly two months since the first cases were detected on May 17, the share of BA.5 among sequenced cases has grown to 35 percent, according to the latest analysis from the KDCA.

BA.5 is considered to be at once more contagious and immune-evasive than the earlier omicron subvariants, and possibly more pathogenic, according to some animal models that are not yet supported by real-world evidence.

Outside researchers working with the KDCA forecast that the BA.5 wave could grow to reach more than 100,000 daily cases by September -- under which scenario as many as 1,000 critical care beds could be occupied by COVID-19 patients at a time, with about 150 deaths occurring a day.

The forecasts for the next two months suggest the upcoming weeks may not be as grim as the BA.2 and BA.1-led wave. In March, when BA.2 was raging, an average of 264 deaths were announced each day.

According to official statistics, there have been 18,561,861 cases of COVID-19 here since the pandemic began, as of Tuesday midnight, about 90 percent of which were added over the initial omicron wave. South Korea saw among the largest BA.2 and BA.1 caseloads globally, with the number of one-day cases peaking at 621,148 on March 17.

This means that officially more than a third of the 51 million population here have been infected at least once. The KDCA says high levels of immunity in the community probably made the brief respite from COVID-19 possible for the past couple of months.

As more than 97 percent of eligible adults in South Korea are fully vaccinated, most omicron patients had breakthrough infections and likely acquired hybrid immunity. Hybrid immunity, which refers to immune protection from both prior infection and vaccination, is believed to be more robust than natural or vaccine-induced immunity.

But protection waning over time and the soon-to-be dominant BA.5’s increased potential to dodge past immunity raise risks of reinfections, the KDCA warned. The proportion of patients with suspected reinfection out of all known patients has grown steadily from 1.22 percent in the first week of June to 2.96 percent by the fourth week.

While Yoon has vowed that his approach to COVID-19 will be driven by science, many of the shortcomings in the country’s response system he had taken issue with as a candidate -- such as the lack of transparency of data -- remain unaddressed.

In a phone call with The Korea Herald on Wednesday, Dr. Paik Soon-young, emeritus professor of microbiology at Catholic University of Korea, pointed out that the government’s monitoring efforts were “subpar.”

Over the first week of July, only about 80,000 tests were conducted a day on average, which is far below the government-touted 850,000 PCR tests a day. The KDCA said it was unable to provide numbers as to how many of the tests being done were PCR or rapid tests.

Since the first week of February, PCR testing has been restricted to people aged 60 and older, which could lead to a considerable proportion of cases among those younger likely going undetected by the less accurate rapid tests, experts have worried.

“It’s negligence on the part of our public health authorities that basic statistics like the amount of whole-genome sequencing that is being carried out are kept under wraps,” Paik said.

Despite repeated requests from The Korea Herald, the KDCA has not published how many samples of positive patients are being sequenced for variant monitoring, or how often. But as samples of patients given rapid tests cannot be collected, those who do not have access to PCR testing are likely not being screened for variants.