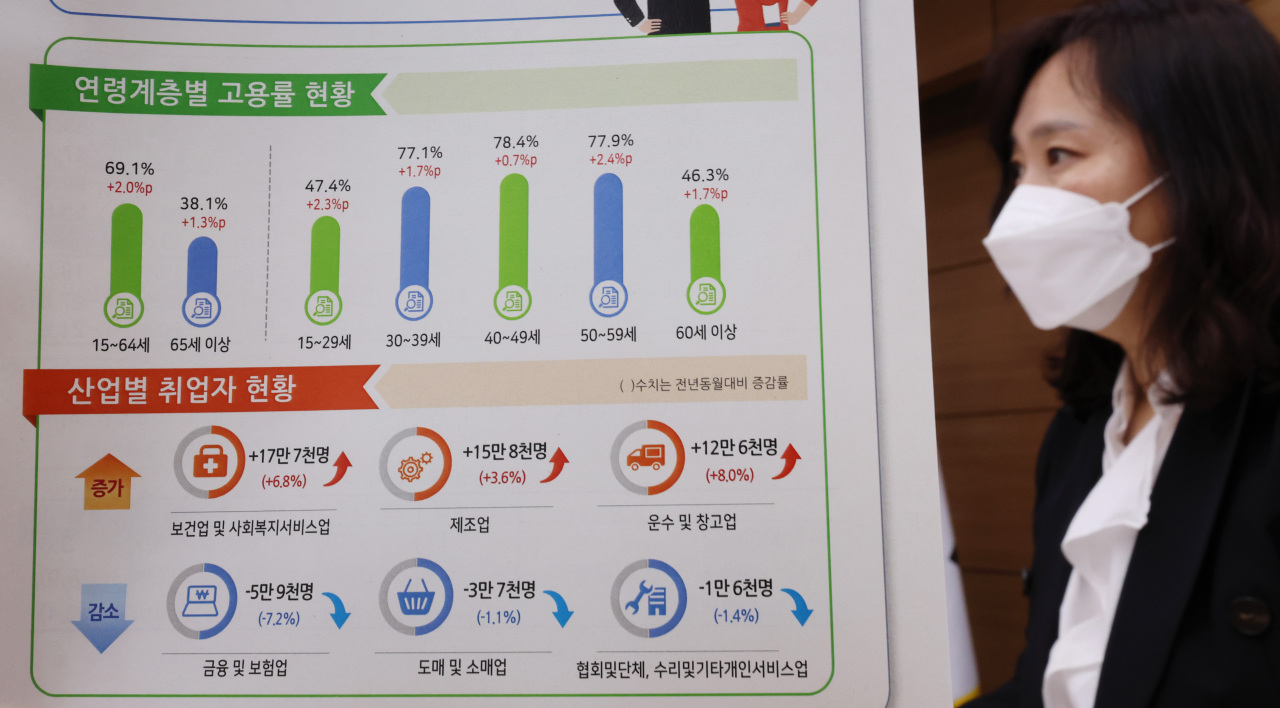 Statistics Korea director general Kong Mi-sook unveils figures on the nation’s employment in June at Government Complex Sejong, Wednesday. (Yonhap)
SEJONG -- The number of employed across the nation increased for the 16th consecutive month, with the tally for June climbing by more than 800,000 on-year, state data showed Wednesday.

While brisk hiring continued last month, employment by age indicates that young generations still suffer a tough job market despite the normalization process from the pandemic.

According to Statistics Korea, the number of employed people increased by 841,000 in June, compared to the corresponding month of 2021, to 28.47 million. The nation’s employment rate also rose from 61.3 percent to 62.9 percent.

In particular, there was a hiring surge among women in their 50s (135,000) and men in their 60s and over (321,000). This could mean that the number of nonregular jobs or public agency-offered jobs for retirees has increased sharply.

“It is estimated that large discount chains, food service retailers and public agencies have recently increased hiring after scaling back jobs between 2020 and the first half of 2021,” said a labor-related research fellow in Seoul.

He added that the data could hint at a bounce-back in the number of self-employed in some sectors like real estate agents.

By sector, a 6.8 percent increase was reported in the health and social welfare services, 6.2 percent in real estate agencies, 5.6 percent in agriculture-fisheries, 3.6 percent in manufacturing, 2.4 percent in construction and 1.3 percent in lodging-food services.

In contrast, there was a decline in financial services-insurance by 7.2 percent and wholesale-retail businesses by 1.1 percent.

While the national average employment rate was 62.9 percent in June, Jeju Province topped the list with 70 percent among the 17 major cities and provinces.

Figures for Seoul, Sejong and Gyeonggi Province recorded 60.8 percent, 65.2 percent and 65.2 percent, respectively. Among those in the bottom four were Busan at 57.4 percent (the lowest), Gwangju at 58.7 percent, Daegu at 59.4 percent and Ulsan at 59.9 percent.

Statistics Korea said the number of unemployed in the nation decreased by 205,000 (18.7 percent) on-year to stay at 888,000 in June. It also said the jobless rate dropped by 0.8 percentage point to 3 percent.

The official figures, which are calculated conservatively, are in contrast to 3.27 million in the number of “extended-based” (or de facto) unemployed and 10.6 percent in de facto unemployment rate, according to the Supplementary Index III for Employment. This is a new measurement for calculating unemployment by Statistics Korea.

Index III, which is also dubbed the “labor underutilization indicator,” counts “underemployed” people among the unemployed. This category includes those who work fewer than 36 hours a week and want to work more, as well as seasonal workers who are out of work for part of the year.