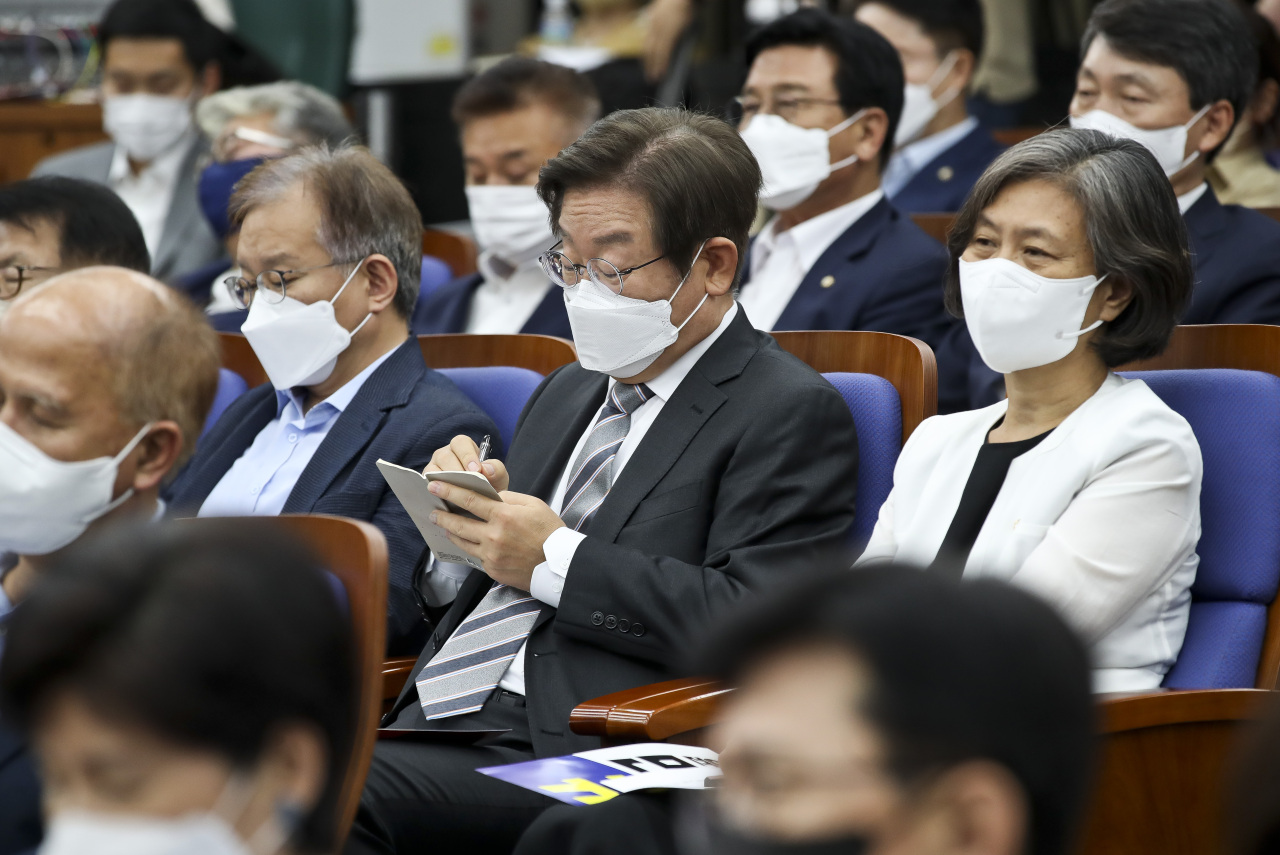 Rep. Lee Jae-myung of the Democratic Party of Korea takes notes during a meeting of the main opposition party`s legislators held at the National Assembly on Monday. (Joint Press Corps)
The lineup of contenders for the chair of South Korea’s main opposition Democratic Party of Korea is almost finished, with the rivalry between rising stars and a major heavyweight at the forefront.

So far, three members of the so-called “97 Generation” have joined the competition in a bid to bring a generational shift and help overcome an ongoing series of election defeats. Reps. Kang Byung-won, Park Yong-jin, Park Ju-min and Kang Hoon-sik have officially announced their bids.

The generation refers to a younger group of politicians who were born in the 1970s and attended college in the 1990s. The group has garnered attention in recent months as a potential pool of leadership as their older counterparts have failed to yield success.

Calls have grown for members of the “586 Generation” to step down and let younger politicians, like those of the 97 Generation, lead. The calls have come after the party lost three elections in a row: mayoral by-elections in April 2021, the presidential election in March and the local elections in June.

All these legislators are to face a steep uphill battle against Rep. Lee Jae-myung, who has not officially declared to run but is widely expected to make an announcement in the coming days.

Many have speculated that Lee and Sul will register sometime around coming Sunday or Monday. The Democratic Party is accepting applications for candidates for the election during those two days, and each candidate is required to pay 80 million won to officially register.

Although Lee has not made any remarks on whether he will run for the chair, he has increased communications with his supporters and started voicing opinions on ongoing political matters to expand his political influence.

Many have strongly favored Lee as the next leader for months, as he bore the party’s flag in the March presidential election and is considered the frontrunner for another bid in 2027. He has also continued to grow his base even after the election defeat nearly four months ago.

The new rules established for the election, brought forth by the party’s national convention preparations committee, have been interpreted to work in favor of Lee.

Bylaws were revised earlier this month so that votes for the preliminary rounds are weighed by select senior party members by 70 percent and public opinion surveys by 30 percent.

In the final round, votes will be tallied by the following ratio: senior party members have 30 percent, regular members with voting rights have 40 percent and designated public opinions surveys have 25 percent.

The Democratic Party‘s official campaign period starts on Aug. 6, with preliminary rounds held in major cities and provinces. The chair will be officially elected at the national convention on Aug. 28 in Seoul.