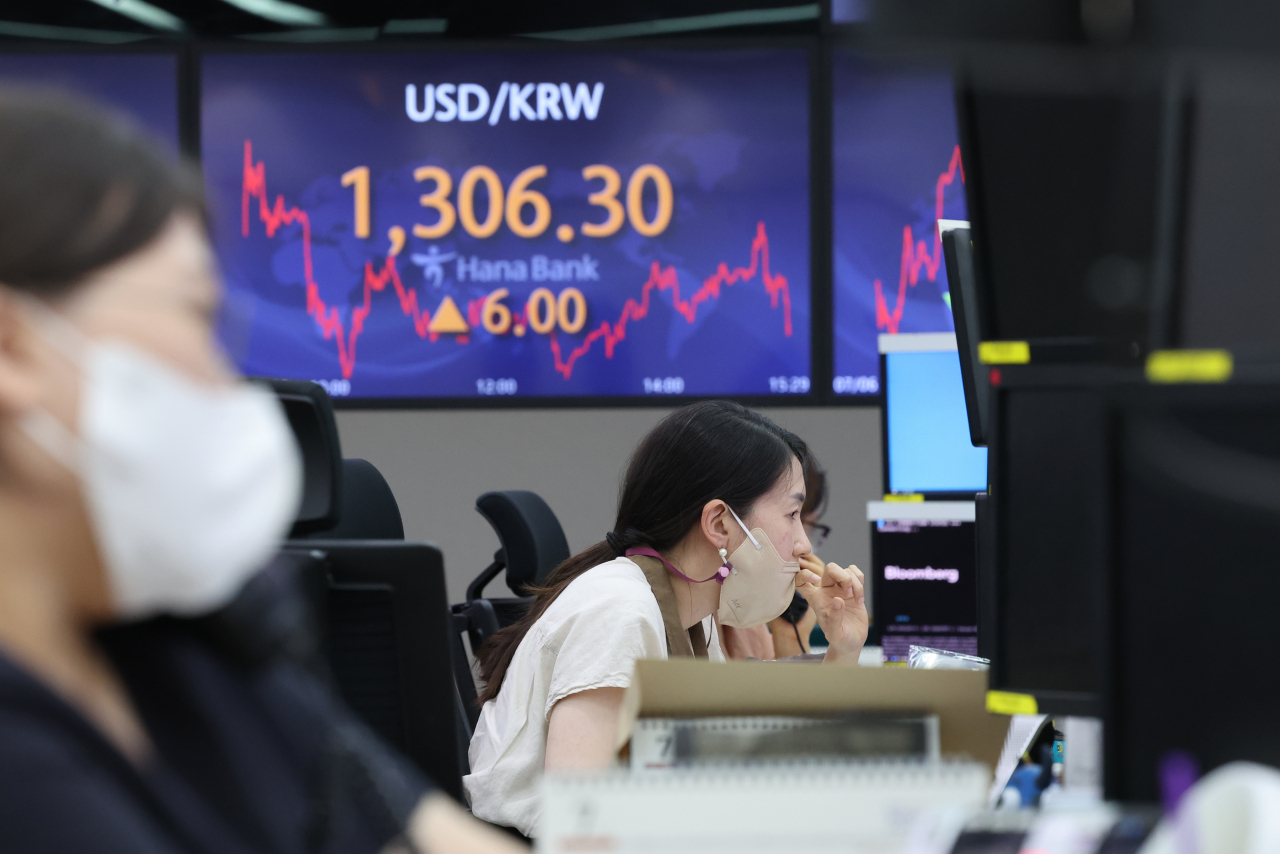 In this file photo, foreign exchange dealers at Hana Bank in central Seoul look at monitors on July 6, 2022, as the Korean won fell sharply against the US dollar. (Yonhap)

South Korean students studying abroad and their parents are taking the brunt of the weakening Korean won, as the home currency is hovering around the lowest level against the US dollar in 13 years.

After hitting a 13-year low of 1,301.8 won against the greenback on June 23, the Korean currency further extended losses to close at 1,312.1 won Tuesday amid growing global recession fears.

The sharply weaker won means soaring living costs for Korean students abroad who rely on money transfers from home to finance their studies and daily expenses.

A 51-year-old woman, surnamed Kim, and her 24-year-old son currently studying in the US are tightening their belts to ride out the foreign exchange crunch.

"I am under enormous pressure from the high exchange rates. I check the exchange rate every day to send money to my son," Kim said.

"My son said he is turning to cheaper groceries and discount coupons for shopping because of the sharply higher living costs."

Her son may skip his home visit this coming summer break due to a sharp hike in air tickets, she said, adding the burden of financing her son's study has never been greater in his seven-year stay in the US so far.

A 54-year-old parent whose child is studying in Canada said she feels as if her heart drops whenever she sees the Korean won slide.

"It used to be 800 won or 900 won per dollar, but now it's in the four-digit range. All the parents who have their children studying in the US or Canada may feel the same," she said.

Choi E-june, a 21-year-old student of Sogang University in Seoul, is also under pressure ahead of his study in the US on an exchange program later this year.

"My original budget went wrong, because it was based on previously lower foreign exchange rates, especially concerning dormitory expenses," he said.

"I set aside some 2 million won ($1,532) to travel the country for 10 days before the academic term begins, but the whole budget was already exhausted in making ticket and lodging reservations because the exchange rate is now far higher." (Yonhap)