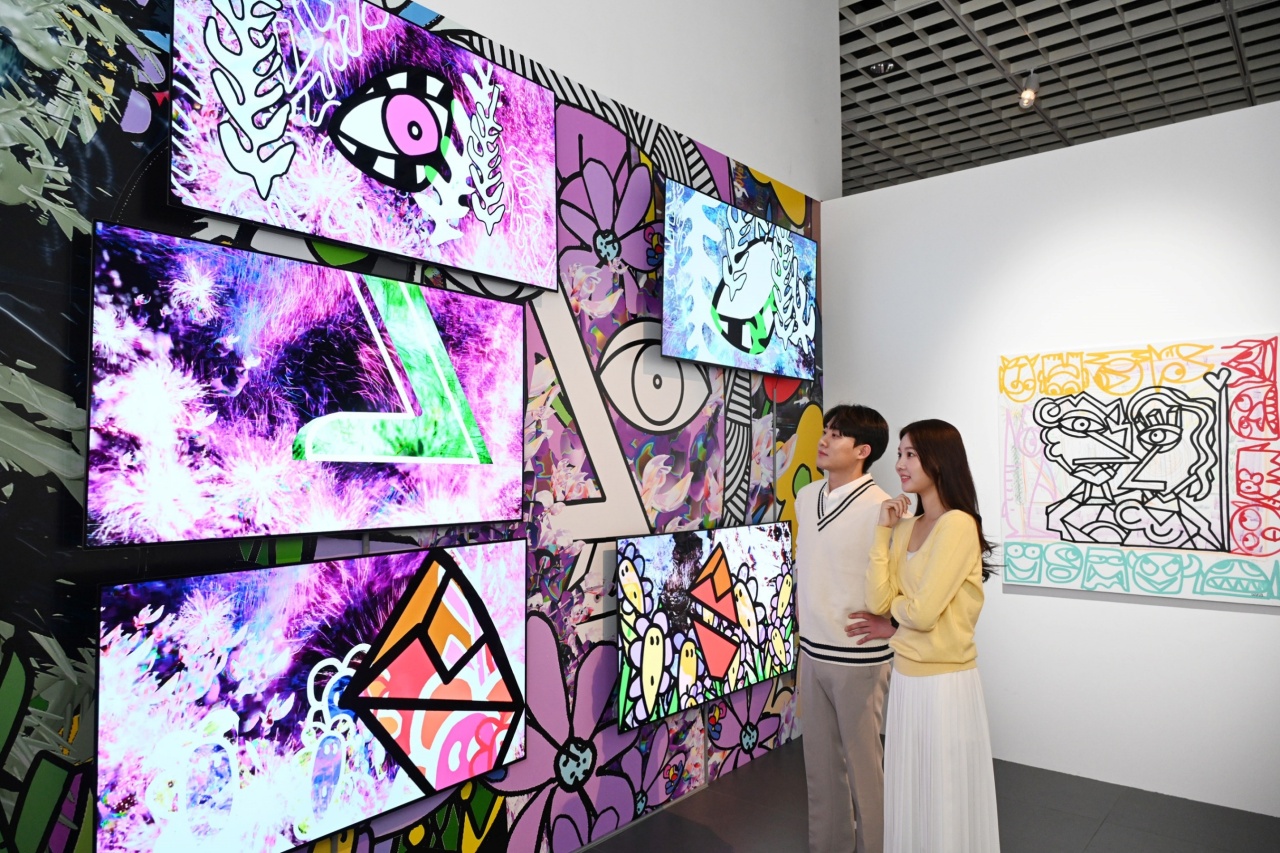 Digital art work is displayed using LG OLED TVs. (LG Electronics)
Flat-panel displays usually come together with semiconductor chips as they are both considered basic elements of the most of the electronic devices in the world.

But with the Yoon Suk-yeol administration placing its policy focus on semiconductor chips and as Yoon pivots toward “economic security” based on the Korea-United States alliance, South Korea’s display panel business has largely been sidelined.

Experts say such shift could end up endangering Korea’s foothold in the display panel industry, as it already faces tough competition from Chinese competitors in the market, and as Beijing seeks to dominate control of the electronic goods supply chain globally.

They have also pointed to concerns of an outflow of engineers from the display industry into the more lucrative chip industry.

“We are at the onset of the engineer outflow from display industry with the government’s focus on the chip industry,” said Yi Choong-hoon, chief analyst at UBI Research.

It would not be difficult for them to jump ship either, another expert said, given that the skill sets required for engineers in the flat-panel display industry and those in the semiconductor industry are similar.

“Flat-panel display engineers have relatively fewer hurdles in landing a new job in the semiconductor industry, and the imminent state support for chip industry might accelerate the career transition,” said Moon Dae-gyu, material science and engineering professor at Soonchunhyang University.

Flat-panel display business entities in Korea are currently provided at least 3 percent tax credit for facility investment, as the display business here is recognized as ”new growth engines and source technologies“ under the Restriction Of Special Taxation Act.

Those entities will be able to receive greater state support, should the display business be recognized as a ”national strategic technology“ -- which doubles the minimum tax credit for investment.

Or else, it must be recognized as a ”national high-tech strategic industry“ under the Korean version of the Chips Act -- the equivalent to the CHIPS for America Act in the US -- coming into force in August. The Industry Ministry and the academic circles are looking to do so.

Once the rules go into effect in August, a new committee led by Prime Minister Han Duck-soo will be set up to designate beneficiaries of the new rules within the limited state budget -- which has remained undisclosed -- while chipmakers and secondary battery makers are to take priority.

“We are working to have the domestic flat-panel display industry to be protected and supported under the new special law. There were calls to do so, but they fell short. We anticipate changes when the new rule is being implemented,” said Park Jea-gun, head of the Korean Society of Semiconductor & Display Technology. 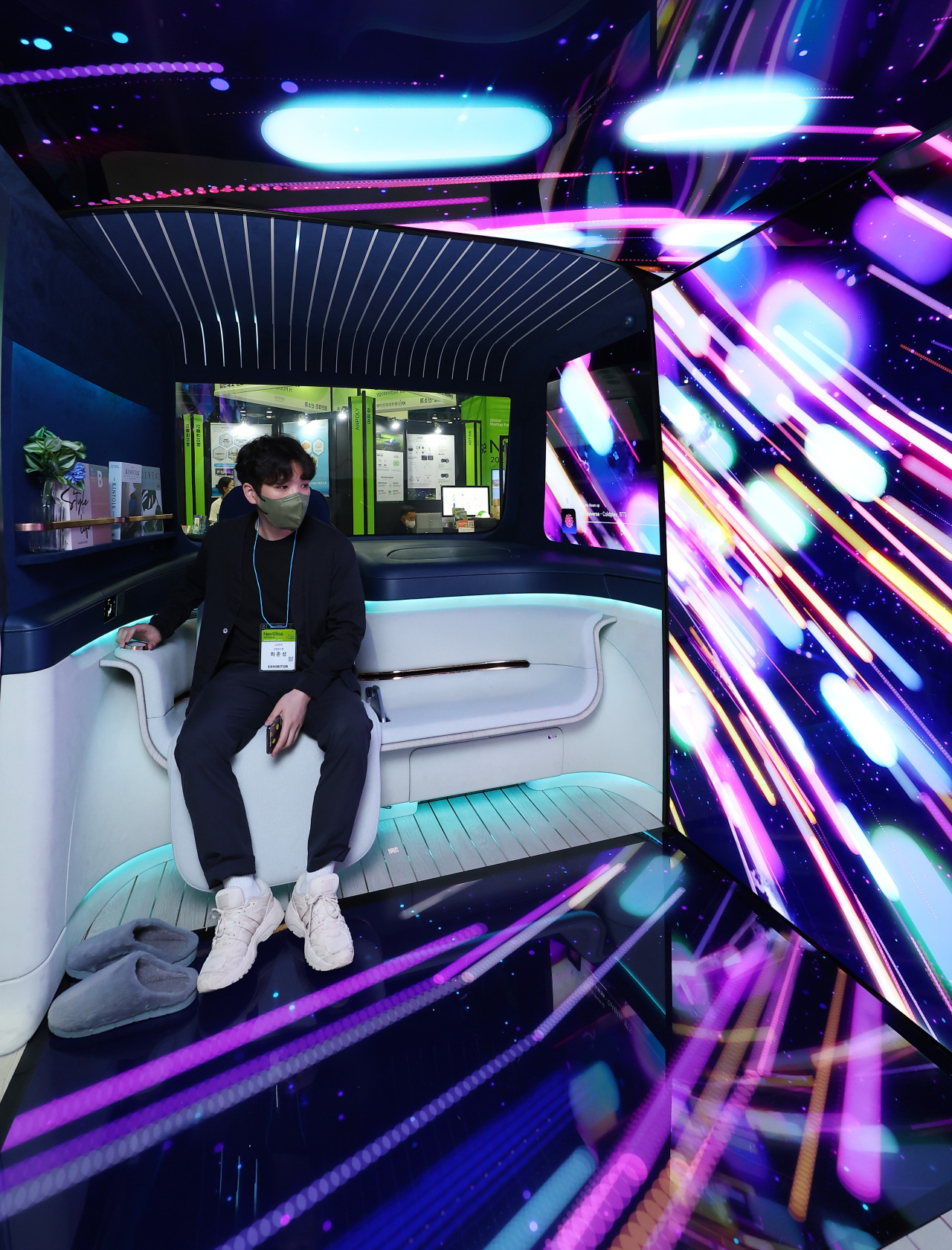 A visitor tries a futuristic car cabin experience with LG Omnipod, which uses LG‘s cutting-edge flat-panel display technology, at NextRise 2022 in Coex, Seoul, in June. (Yonhap)
Korea is home to LG Display, which makes white-OLED panels for TVs and LCD panels for electronic devices like smartphones or laptops, as well as Samsung Display, dedicated to small and midsize OLED panels for IT devices.

The domestic industry also faces increasing competition from China. Some Korean firms have had to exit the LCD panel business entirely, as they are no match for rivals such as BOE Technology and China Star Optoelectronics Technology that have the Chinese government’s full, unwavering support.

Slowing demand for OLED technology from the first half of this year has also hurt Korean firms’ profits.

LG Display is projected to see the annual operating profit fall by 75 percent on-year in 2022, and to turn to the red in the second quarter, according to an analyst consensus by market intelligence FnGuide.

Chang Jung-hoon, an analyst of Samsung Securities ,cited an oversupply of flat-panel displays that is causing an increase in order backlog across all applications from mobile phones to TVs.

On the other hand, Chinese competitors are ramping up its push for OLED technologies, with companies like BOE having showcased their latest OLED panel technologies with various form factors like “slidables” at the SID 2022 event in May.

In order for Korean firms to stand a winning chance, experts said more investment would be needed in developing and commercializing cutting-edge technologies that competitors cannot imitate.

“With Chinese firms taking over the LCD market in the world, the OLED technology development, OLED-related intellectual property retention, joint research on new materials and facilities with partners, investment in large panel production lines and prevention of talent outflow would allow Korean firms to stay ahead in the competition.”

Although the Korean display panel industry has so far maintained an edge over Chinese firms in terms of form factors and lighting technologies, it might be pushed to the threat of extinction unless further investments are made, experts warned.

“On the economic security front, (China’s dominance in the flat-panel display industry) will be a problem not only for Korea, but also for other parts of the world,” Park said. To Korea, the China dominance in the panel industry also means the death of Korean suppliers as 7 out of 10 parts for display panels are domestically produced, Park added.