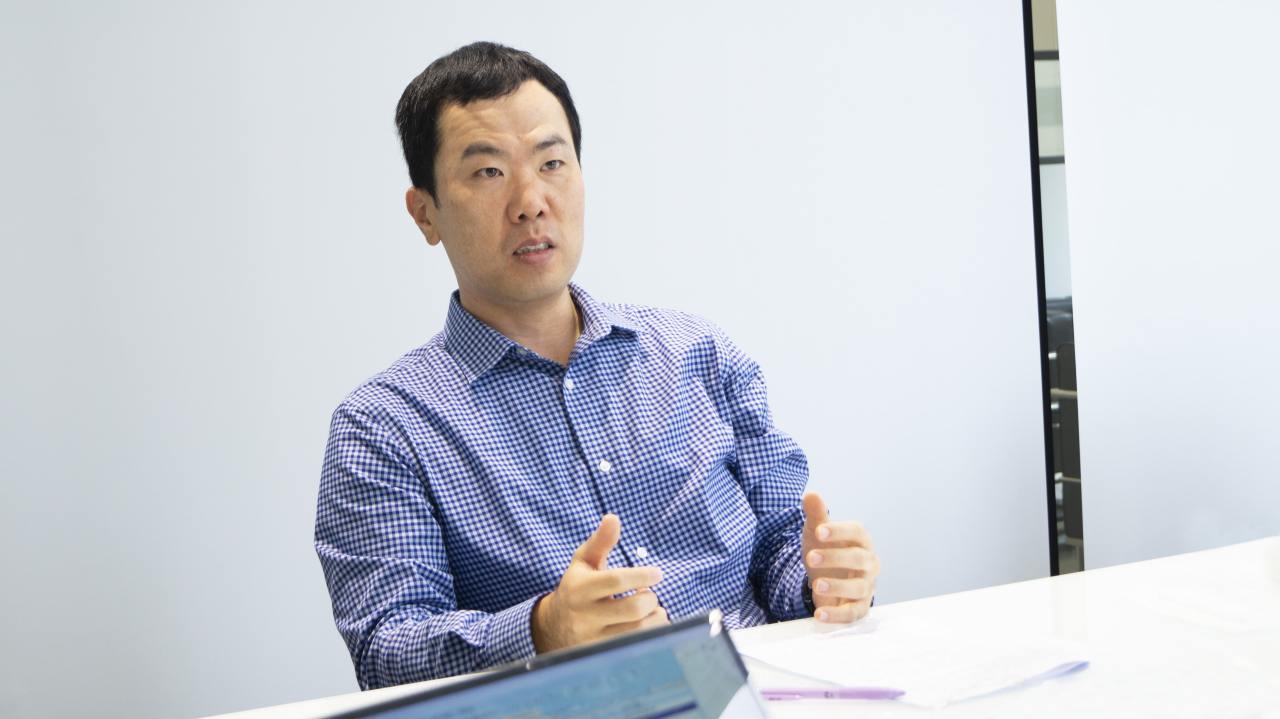 Kim Sang-tae, chief technology officer at Bertis Bioscience (Bertis)
More research into proteomics -- the study of the collection of proteins in the human body -- could infinitely upgrade the diagnosis sector so that all types of diseases can be easily detected in the early stages, a proteomics expert said.

“There are diseases that have limited relations with DNA and genomics, such as depression and cardiovascular diseases. On the other hand, protein is involved in most biological activities so there is a wide range of areas that can be dealt with proteomics,” Kim Sang-tae, chief technology officer at Bertis Bioscience, told The Korea Herald in an interview on July 5.

Bertis Bioscience was founded last year as a US subsidiary of South Korean local biotechnology firm Bertis, a developer of diagnostic solutions based on technologies that combine proteomics and artificial intelligence. Kim joined the firm in October as an expert with 20 years of experience in bioinformatics, a branch of science that uses technology to analyze large amounts of biological data.

Kim has studied proteomics for about two decades, but said the field began to gain wider attention in 2020. He said proteomics can look at proteins to make assessments of a body’s condition, like genomics looks at genes to assess its design.

“For example, let’s say that we have a leak in a building. Genomics looks at a blueprint which was designed 30 years ago and tries to figure out why there is a leakage. Proteomics actually goes to the leakage site and looks at it (to find the solution),” he said.

Acknowledging that genes are stable, less likely to change and easier to duplicate, the CTO underlined that proteins contain much more information. However, they are harder to assess, as they change more often.

Kim also noted that an “all-in-one diagnostic kit” was theoretically possible if different types of protein can be accurately measured, adding that such a solution might even be realized in less than 10 years given how fast the technologies in proteomics are developing.

Bertis successfully launched the world’s first proteomics-based blood diagnosis solution, Mastocheck, which can detect breast cancer in the early stages when it obtained approval from the Ministry of Food and Drug Safety in January 2019. According to the company, a total of 100 medical institutions and hospitals across the country were using Mastocheck as of May this year.

“Global proteomics companies such as Biognosys, Olink, Seer and Somalogic do not have a commercialized product for disease diagnosis yet. Bertis has the experience of a successful commercialization, so I expect that we can push for (other projects) quicker than before,” said Kim.

Bertis says it is working on proteomics-based diagnoses for other diseases including cardiovascular diseases, depression and pancreatic and ovarian cancers.

“Mastocheck uses certain types of stable protein as a biomarker that does not change to figure out how much of it is there and utilize the amount. … Proteomics has enormous growth potential. It is a broad field and there are many (diagnostic) areas that can come to life through this solution,” Kim said.

Kim said advancements in AI technologies and machine learning can accelerate how proteomics is used to identify correlations between protein and diseases.

“We developed a deep learning model named (Auto Multiple Reaction Monitoring). It is an innovative analysis tool that can cut down the time it takes for data analysis from 600 hours to less than one hour,” he said.

Kim said the company is reviewing when would be the right time to go for an initial public offering on Korea’s tech-heavy bourse Kosdaq, but did not mention any specific timeline.

The global proteomics market size is expected to reach $50.7 billion by 2027, growing at a compound annual growth rate of 12.4 percent, according to market researcher Arizton.