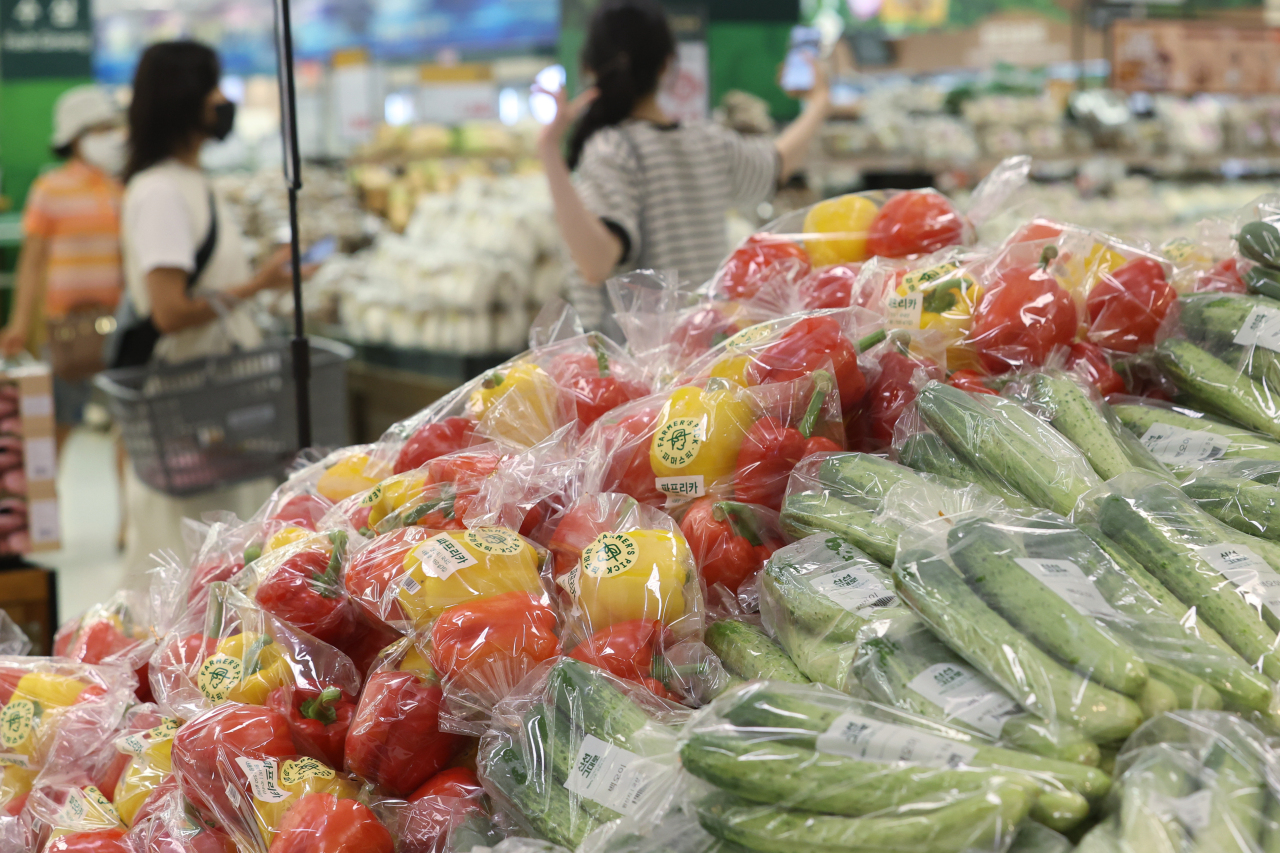 Interior of a large discount chain in Seoul on Monday (Yonhap)
SEJONG -- Economic policymakers on Friday unveiled a policy of adding a zero-percent quota tariff on some imported daily necessities, including livestock products, in an attempt to tame the recent spike in consumer prices.

The policy drawn by a group of ministries including the Ministry of Economy and Finance, was finalized during a meeting attended by President Yoon Suk-yeol in Seoul earlier in the day. It will be implemented via enforcement ordinances later this month.

According to the Finance Ministry, the government will apply a zero-percent tariff on seven import items, including beef, pork, chicken, baby formula, coffee beans, spirits for alcoholic drinks and scallions, for a specific period of time or on a certain amount.

Lowering the quota tariff brings the effect of lowering the prices on imported products, while the policy could cause backlash from producers of domestic goods in the nation.

Starting from late July, a zero quota tariff on 100,000 tons of beef will be implemented. South Korea has generally levied a quota tariff of 10.6 percent on US beef and 16 percent on Australian beef under bilateral free trade agreements, respectively.

Given a 40 percent quota tariff has been imposed on beef products from other countries, excluding the US and Australia, the policy is expected to cause a slash to a certain extent in consumer prices of beef.

“Under the policy, prices for beef products will likely be cut by up to 5 to 8 percent,” a senior official said.

A zero-percent quota tariff will also be implemented on 82,500 tons of chicken products. About 94 percent of imported chickens come from Brazil and Thailand, while Korea has levied quota tariff of 20-30 percent on these products.

As a zero-percent tariff on 10,000 tons of pork -- which was conducted earlier this year -- has already completed, the government decided to extend the policy for another 20,000 tons of imported pork.

In the case of baby formula, the government plans to lower the quota tariff on a gradual basis to zero, while it has imposed the tariff of 20, 40 and 176 percent on the products according to import sources.

In a similar vein, quota tariffs on coffee beans, spirits for alcoholic drinks and scallions will also be slashed to zero percent, said government officials.

The enforcement ordinances for lowering the tariff are likely to take effect as early as July 20 after a Cabinet meeting, slated for July 19.

According to Statistics Korea, the nation’s inflation rate reached 6 percent in June, the highest in more than two decades.