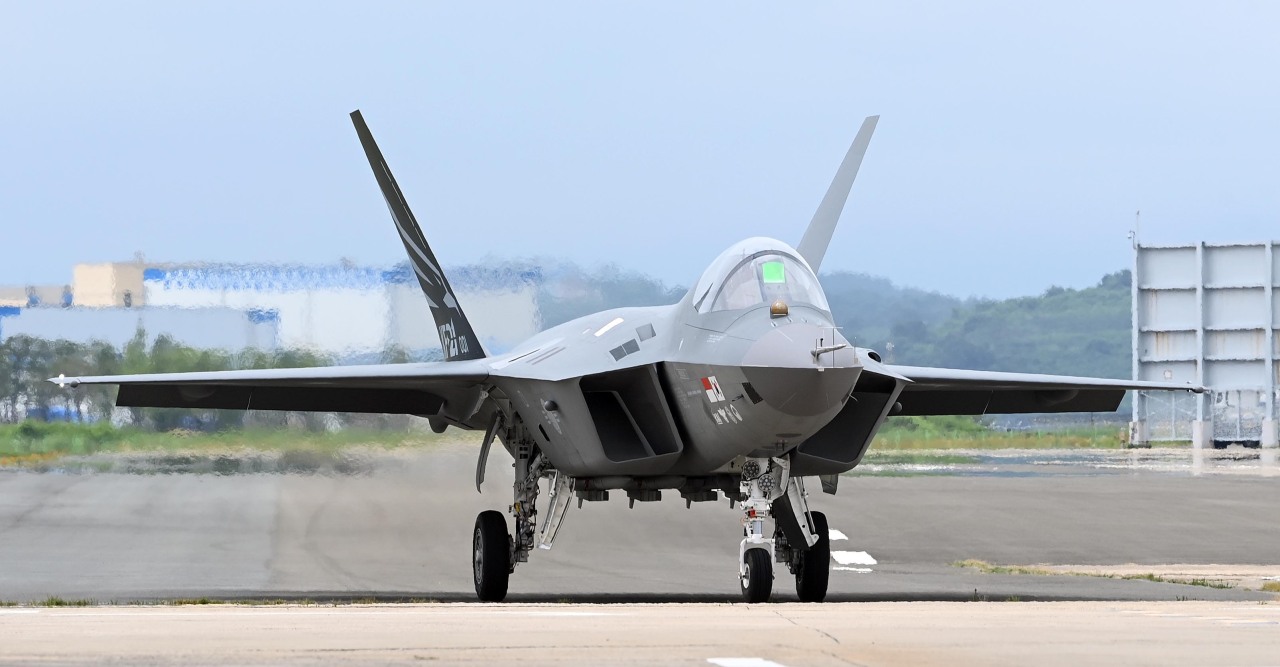 A texting test of a KF-21 prototype No.1 was publicly conducted for the first time on Wednesday at the taxiways located inside the headquarters of Korea Aerospace Industries in Sacheon, South Gyeongsang Province. (Pool Photo)(Yonhap)
SACHEON, South Gyeongsang Province — South Korea’s first homegrown KF-21 fighter jet is gearing up for its inaugural flight test scheduled for late July. But a maiden flight is just the beginning of 2200 rounds of planned flight tests that will be continued by 2026.

KF-21 Boramae fighter prototypes have been undergoing low, medium and high-speed taxi tests since June 25 and will continue until July 13, Korea Aerospace Industries confirmed to The Korea Herald.

A taxi test examines the operability and structural soundness of 4.5-generation indigenous fighter jets, which is the last step before a first flight test. Completing high-speed taxi testing means a KF-21 prototype is all set for its first flight.

On Wednesday, a texting test of a KF-21 prototype No.1 was publicly conducted for the first time at the taxiways located inside the KAI headquarters in the city of Sacheon, South Gyeongsang Province.

“When we finish verifying the structural integrity of aircraft and safety of components through low, medium and high-speed taxi tests, we will finally conduct a flight test,” Kim Nam-shin, chief of the KFX Program Management Team at KAI, told reporters Wednesday after the taxi testing.

Starting with the first of 2200 flight tests in late July
KAI plans to begin a test flight of its experimental KF-21 prototype in the third or fourth week of July, according to multiple officials. However, the schedule has not yet been finalized due to variables, including capricious weather in the rainy season.

The KF-21 prototype No.1, featuring the national flags of South Korea and Indonesia, will make its maiden flight for around 30-40 minutes to examine its basic performances, multiple KAI officials confirmed to the media after the taxi test.

But a planned first test flight is just the beginning of the five-year-long journey.

KAI and South Korea’s Air Force will conduct around 2200 flight tests between this July and 2026 with six KF-21 flyable fighter prototypes. As of this month, KAI has finished working on four single-seat prototypes, two twin-seat prototypes, and two ground-testing models.

Flight tests will verify the safety of fighter aircraft first. The scope of tests will be gradually expanded to examine altitude, speed, maneuverability, in-flight performance and handling, among other qualities. Weapon control systems will also be inspected, including the separation and launch of air-to-air weapons.

South Korea seems to have progressed relatively quickly compared to the US Defense Department’s F-35 Joint Strike Fighter Program. The project of developing Lockheed Martin F-35 stealth fighters started in 1995, but an F-35 prototype took to the air for the first in December 2006. 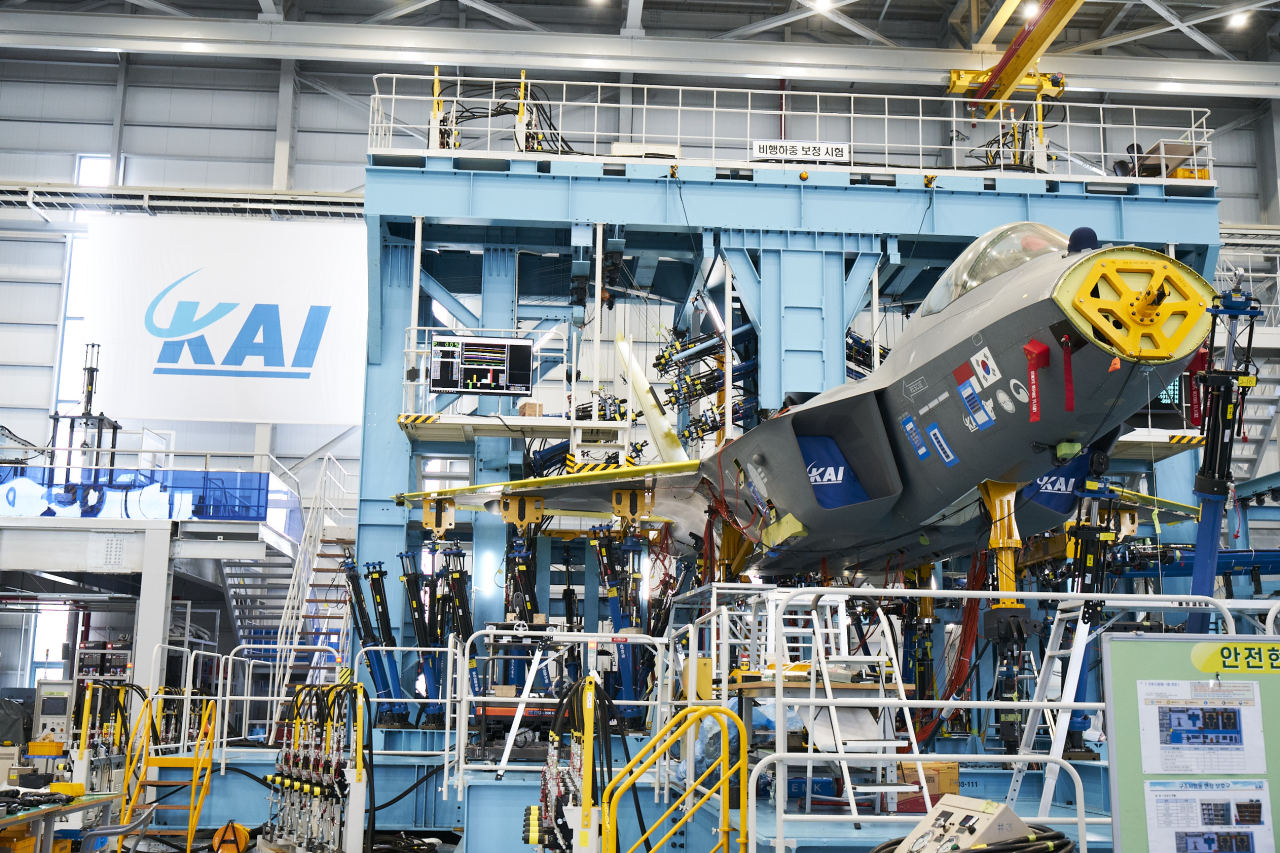 The main goals of the project are to replace F-4s and F-5s -- obsolete fighter jets operated by South Korea’s Air Force for more than 30 years -- and to independently develop next-generation fighter jets with capabilities required for the future battlefield environment. The KF-21 program has paved the way for South Korea to independently produce fifth- and sixth-generation fighter aircraft.

Against that backdrop, the KF-21 program also seeks to expeditiously greenlight mass production in the first quarter of 2024, Col. Noh Ji-man, who leads the KF-X Program Group at the Defense Acquisition Program Administration (DAPA), said Wednesday during a press briefing at KAI headquarters.

To that end, KF-21 fighter prototypes should pass an interim test to assess and measure their operational suitability for combat, Col. Noh said, adding that the test will be scheduled for November 2023.

The final, full-scale assessment of the operational effectiveness and suitability of KF-21s will be carried out in 2026, when the first stage of the KF-21 development project is expected to be finished.

The KF-X program consists of two stages over 13 years, from 2015 to 2028. The first stage focuses on developing aircraft and integrated logistics systems between 2015 and 2026. The second phase aims to develop aircraft capabilities to carry out air-to-surface missions between 2026 and 2028.

The approach is analogous to the F-35 program’s “concurrency” strategy, in which development and production phases overlap. But critics have argued that the approach is malpractice and raised the issues of technical deficiencies and safety.

“This strategy aims to protect our country’s defense industry and maintain its technological capabilities,” Col. Noh said. “If we seek to sign contracts and initiate production after 2026, it will make it difficult for companies to maintain technology, production lines and staff by increasing the burden of maintenance expenses.”

A total of 1,103 personnel at KAI have been involved in the KF-21 program as of this year, according to the company.

Should South Korea successfully complete ground and flight tests by 2026, it will be the eighth country in the world that has independently developed advanced supersonic fighter jets.

But Noh said South Korea will need to clear various hurdles, including increased production costs that would be affected by the COVID-19 pandemic, global supply chain crisis and war in Ukraine. South Korea has been making every effort to minimize the impact of the rising costs of raw materials and supply chain shortages.

“Developing a fighter jet is not an easy task by any stretch, and it does not occur overnight,” Col. Noh said. “We will inevitably face other challenges, but we hope we will continuously derive support and encouragement, which are the source of our power to surmount such challenges.”