Choi Kwang-ho, secretary general of Korea Music Content Association, delivers a presentation on its brand new global K-pop “Circle Chart” at a proclamation ceremony in Jongno-gu, central Seoul, Thursday. (KMCA)
South Korean music sales tracker Gaon Chart has debuted a new name with an aim to provide the most accurate and diverse K-pop data for fans all around the world.

The Korea Music Content Association, which operates the Gaon chart, held a proclamation ceremony in Jongno-gu, central Seoul, Thursday, during which it layed out a road map for its renewed K-pop chart, as well as unveiling the brand new name for the chart -- Circle Chart. Gaon Chart, founded in 2010, has operated as the country‘s most recognized music chart and is often compared to the American Billboard charts and Japan‘s Oricon charts.

“Gaon Chart will be renamed to Circle Chart beginning today. The shift is expected to connect K-pop fans around the world with one another. We are hoping the global K-pop chart will establish a bridge to the spread of K-pop’s good influences and to become a K-pop big data hub that can generate more accurate data for the industry,” Choi Kwang-ho, secretary general of KMCA, said during the event.

The association has established global partnership deals with Spotify and Apple Music, as well as YouTube and TikTok since 2020, according to Choi.

With these strategic alliances, the chart operator will be able to legitimately gather a variety of data from the global companies. Previously, it had a limited access to the data provided by the local streaming players such as Melon, Genie Music, Bugs, Flo and Naver’s Vibe, Choi explained.

The retail album chart on Circle Chart will be separated into two -- accumulated physical album sale figures from home and abroad as well. To usher in the K-pop industry’s moves to reduce environmental pollution, the global chart will create a section that determines the ranking of eco-friendly album productions. 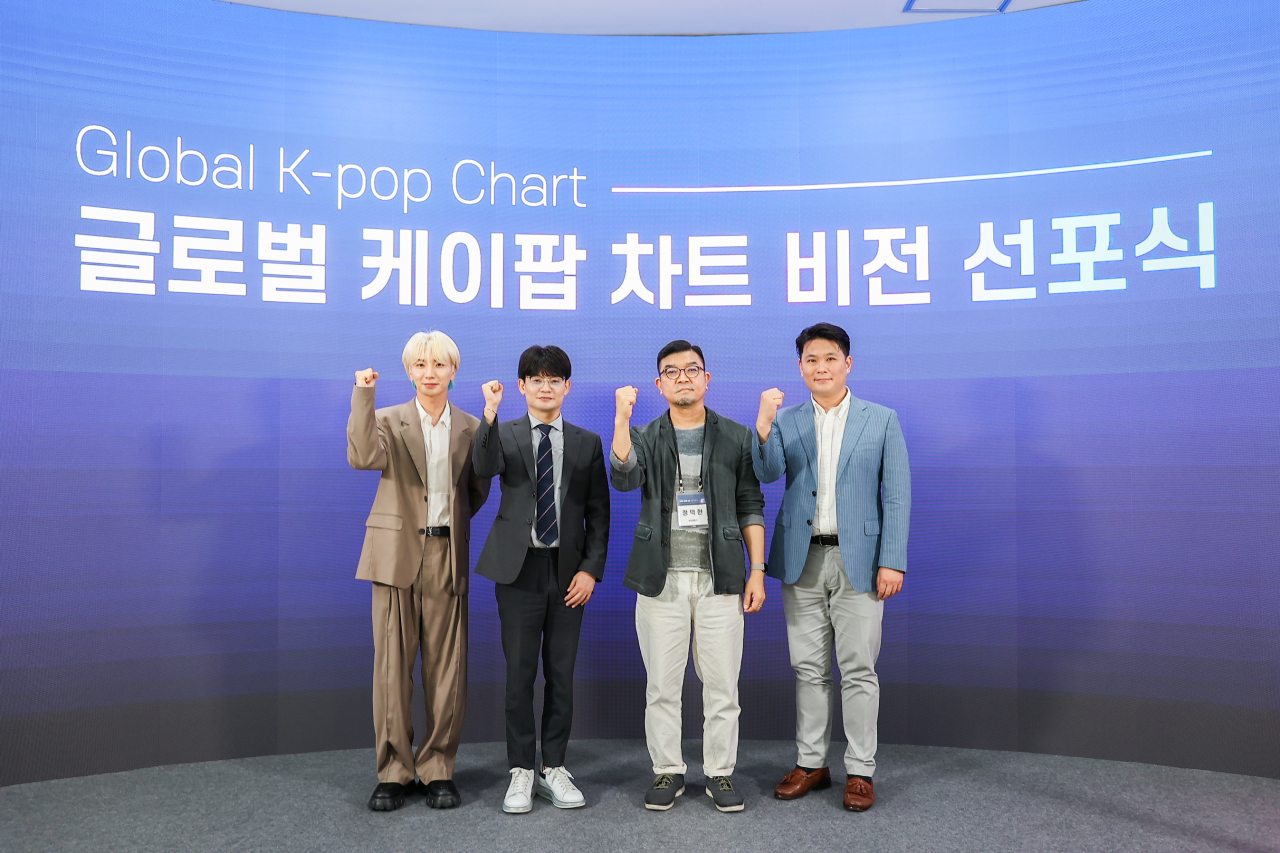 From left: Super Junior‘s Leeteuk, Korea Music Content Association’s secretary general Choi Kwang-ho, pop culture critic Jung Duk-hyun and KDI School of public policy and management’s professor Lee Tae-jun pose for a photo during a proclamation ceremony in Jongno-gu, central Seoul, Thursday. (KMCA)
Since the global K-pop chart was given a new name, the association’s annual Gaon Chart Music Awards has also changed its title to Circle Chart Music Awards. The event is set to take place in January next year. A new award for being environmentally-friendly will be created.

Leeteuk, who hosted Thursday’s event, said, “We can look forward to famous global pop artists such as Justin Bieber winning awards at the Circle Chart Music Awards like we had looked forward to BTS’ win at the Grammy Awards. Since there will be a new award for climate change and environmental protection, I‘ll aim for it since I own an electric vehicle.”

“Before I got to know what Circle Chart is about, I cast the doubt on its operation direction because Gaon Chart has already been a stable chart locally. But since K-pop has become a global phenomenon, I have recognized the need for a global K-pop chart, too. ... Now I think the chart’s vision is clear and valuable enough,” Jung said.

Professor Lee added, “Although going carbon neutral is the government’s task to solve, I would like to thank the K-pop industry for its swift action and effort. ... To find effective ways for the better future, we need collective intelligence and to do so, we need data. Beyond the K-pop industry’s innovation and transparency, I believe the effort will give positive influences on other industries.”