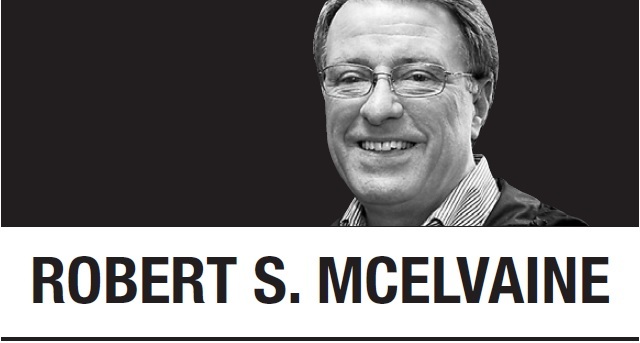 “The United States is now at one of those historic forks in the road whose outcome will prove as fateful as those of the 1860s, the 1930s, and the 1960s,” Nancy MacLean wrote in her 2017 book, “Democracy in Chains.”

History is punctuated by discontinuities that alter its trajectory. The key to the occurrence of such watershed moments is less the leaders than a sociopolitical environment that is receptive to change.

The current inflection point has become much more apparent over the past five years -- and especially in the last few weeks. The United States in 2022 is at a crossroads and the direction taken will likely determine whether the experiment in democracy launched in 1776 will survive. One of the forks before us leads to autocracy, kleptocracy, plutocracy, renewed subordination of women and people of color, and to a time before the dramatic progress that began in 1964.

When he took office, US President Joe Biden set an ambitious agenda for an activist government, proposing greatly expanded programs that would build a more racially and economically just society. Some say it was an agenda not seen since the Lyndon Johnson administration.

Johnson’s vision and ability to get things done in Congress were clearly important in the change that occurred in 1964, but more essential was that Johnson found himself in an environment where progressive approaches were possible.

That is apparent in the dramatic cultural change that took place during the same period.

In January 1964, Bob Dylan’s third album, “The Times They Are a-Changin’,” was released. Johnson’s declaration of a war on poverty in his State of the Union address that month and Dylan’s title song were parallel in the thrust of how they viewed the times.

When Dylan sang about the chance not coming again and the loser would later win, he could have been channeling the new president. Dylan and Johnson -- the poet and the president -- almost seemed to be singing a duet.

When one of Dylan’s friends picked up a typed copy of the song’s lyrics a few months earlier and read aloud the line, “Come senators, congressmen, please heed the call,” he asked, “What’s this s---, man?” Dylan shrugged and responded, “Well, you know, it seems to be what the people like to hear.”

Such a coincidence of a musician’s words with the arguments of an activist president suggests that something was “in the air.” And one of the things in the air in 1964 was a desire to expand freedom and improve the conditions of society’s “losers.”

Dramatic changes would keep coming at a furious pace over the ensuing months into 1965. The result was a nation reshaped politically, socially, racially, economically, and sexually -- and one that became a full democracy for the first time.

Today, the right-wing extremists who have hijacked the Republican party are determined to reverse all that progress. Their chances for success depend to a substantial degree on what the zeitgeist of 2022 is.

Authoritarianism has been spreading. Sinister promoters of white supremacy and opponents of democracy control the leading cable news network and dominate one of the two major parties. Political violence has come to be accepted by a sizeable fraction of those who identify with that party. The Texas Republican Party has just adopted an extremist platform that calls for abolishing the income tax, putting into law that life begins at conception, requiring that lies be taught as history, idolizing the traitors who fought the United States to maintain the “right” to enslave human beings, prohibiting any gun safety laws.

But do those forces of hate reflect the spirit of our time? Is there reason to hope that our society has the strength to drive out the forces of antidemocratic extremism?

The freedoms fought for and expanded in the 1960s changed America permanently, and going back is unimaginable. Even now, the extremism of the Supreme Court in denying women control over their own bodies and the eagerness of many Republicans to demolish LGBTQ+ rights and innumerable other freedoms are producing a resurgence of activism.

Perhaps the mounting evidence that Donald Trump was determined to overturn a democratic election result, through violence if nothing else worked, will diminish the attractiveness of authoritarianism.

The zeitgeist of 1964 was freedom, and a substantial majority of Americans embraced it as a path to a better future, out of a past built on racism and oppression. The American soul stands at a crossroads now -- whether to reaffirm that legacy or repudiate it.

Whether senators and congressmen heed the call now depends on voters electing enough Democrats to give them workable majorities in both houses of Congress to block right-wing extremists hell-bent on “taking America back” to the time before 1964.