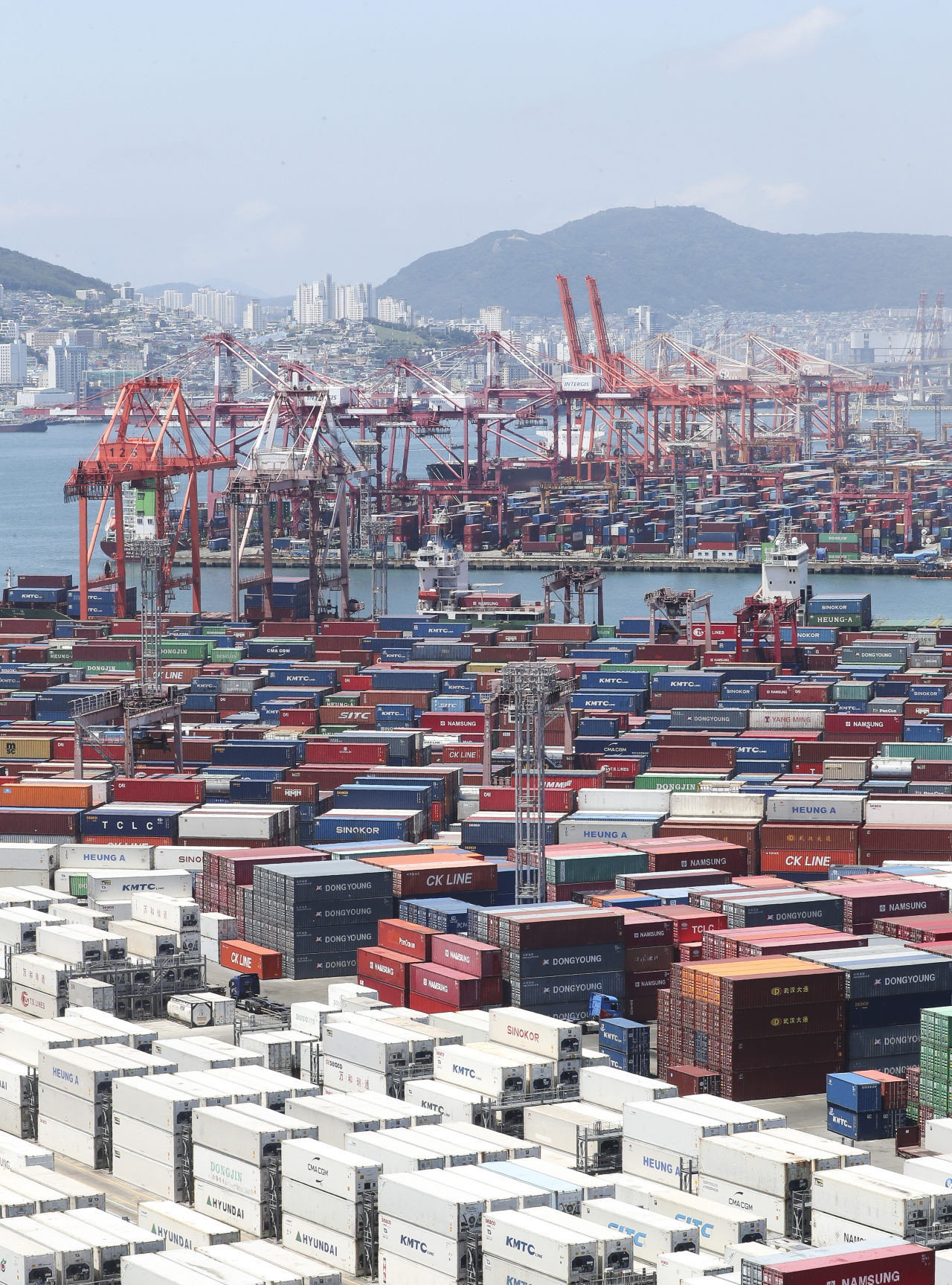 Containers for exports and imports are stacked at a pier in South Korea's largest port city of Busan last Friday. South Korea logged a trade deficit of $10.3 billion in the January-June period, the highest figure for any first-half period, due to high global energy prices, according to data from the Ministry of Trade, Industry and Energy. (Yonhap)

South Korea posted a current account surplus in May, turning around from the previous month's deficit, but its surplus was still much smaller than a year earlier as import bills remained high amid soaring energy and commodity prices, central bank data showed Thursday.

The country's current account surplus amounted to $3.86 billion in May, according to the preliminary data from the Bank of Korea (BOK).

It marked a reversal from the previous month when South Korea registered a current account deficit of $80 million -- the first shortfall since April 2020 -- due in part to such one-off factors as expanded overseas dividend payments.

The May surplus is still much smaller than a year earlier when the country posted a surplus of $10.41 billion, the data showed.

The on-year contraction is blamed on mounting import bills caused by a jump in prices of oil and other key commodities that South Korea mostly buys from overseas.

Imports totaled $58.96 billion in May, up from $44.55 billion tallied a year earlier. The inbound shipments grew at a faster pace than exports, which increased to $61.7 billion from $51.2 billion over the same period, the data showed.

The goods balance that tracks inbound and outbound shipments registered a surplus of $2.74 billion in May, but the amount was sharply down from a surplus of $6.65 billion a year earlier.

"Rising prices of energy, including oil, led to an increase in import bills, which grew faster than exports and sharply undercut a goods balance surplus," a BOK official said.

"A spike in imports and a resulting reduction in a goods balance surplus will likely continue for the time being," he added.

The official still expected South Korea to continue to post a current account surplus in June, which will help it beat its first-half surplus projection of $21 billion.

The country also saw its service account, which includes outlays by South Koreans on overseas trips and transport earnings, post a deficit of $20 million in May, the first shortfall in four months.

The shortfall, however, was smaller than the previous year's deficit of $730 million, mostly thanks to high freight rates, according to the data.

The primary income account, which tracks wages of foreign workers and dividend payments overseas, logged a surplus of $1.45 billion in the month, down from $5.03 billion the previous year. It marked a reversal from April's deficit of $3.25 billion. (Yonhap)