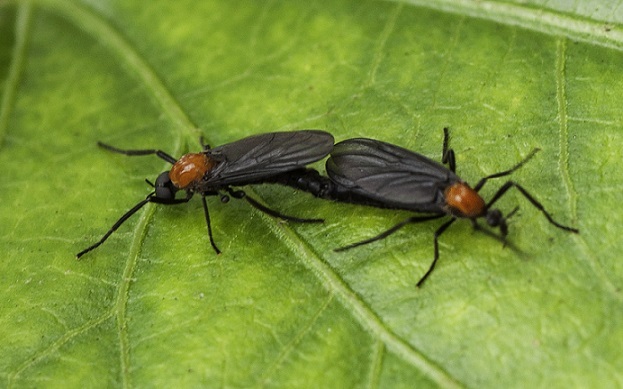 A pair of mating lovebugs (Getty Images)
The American West is battling a “biblical” explosion of grasshoppers and Mormon crickets. Italy’s Sardinia has been hit by what has been described as the worst locust outbreak in 60 years. It seems the world is under an invasion of insects.

And South Korea has its own problem.

An outbreak of tiny flies called “lovebugs” has brought an onslaught of complaints from residents in the northwestern part of Seoul and adjacent city of Goyang, Gyeonggi Province, prompting district offices to launch a pest suppression operation, which includes spraying insecticides.

But local experts are pleading for patience, saying the flies, while annoying, are harmless and will last for only a week or two.

“Insecticides do not selectively kill the lovebugs. They kill other insects that are beneficial like those eating mosquitos,” according to Lee Seung-hwan, a biological sciences professor at Seoul National University.

The outbreak of lovebugs appears to have begun over the weekend.

“On Sunday, I found more than 30 lovebugs in my room. They must have come through the window screen. I nearly freaked out,” said Ji Ha-yun, a 36-year-old female office worker who lives near Yeonsinnae Station in Eunpyeong-gu, one of the worst-hit districts in Seoul. 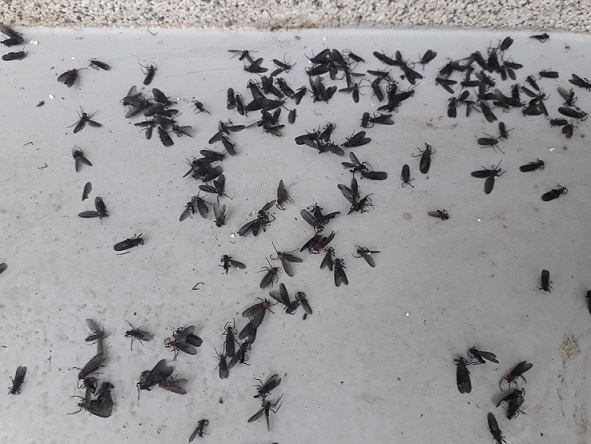 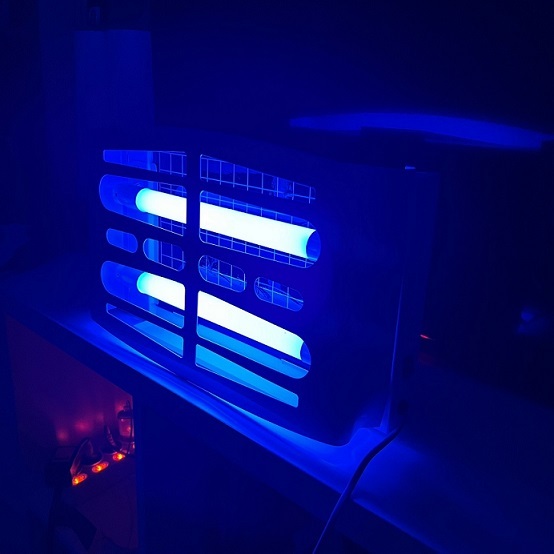 An electric bug zapper that Ji bought to kill lovebugs. (Courtesy of Ji)
“They’re not like ordinary flies and mosquitoes. They won’t go away even if I wave my hands,” she said.

Native to Mexico and Central America, lovebugs are small black flies with red thoraxes. They earned the nickname because they attach themselves to each other at the rear of the abdomen and remain connected during and after mating, even in flight, for about three days.

Lovebugs typically mate in May and June, and females spawn dozens of eggs, which hatch in August and September. After living through the winter as a pupa, they transform into adults usually between late May and early June.

But this year, adult lovebugs have appeared en masse a month later.

Byun Hye-woo, a senior researcher at the National Institute of Biological Resources, attributed this to the abnormal weather conditions the country has seen this spring.

“This year’s spring drought extended their pupa stage, then the adult lovebugs broke out of the chrysalis in groups over the weekend (after the monsoon season began). Insects’ developmental stages are highly affected by the exterior environment,” Byun said.

The bugs, however, pose no significant threat to humans. They do not bite or sting. Nor do they carry any known disease or poison. Adult male lovebugs live up to five days, while the females have a longer life span of seven days.

Yet, these tiny flies can be clearly annoying when they are found in large numbers.

“Lovebugs emerge every year. But the recent outbreak seems to have irritated people because the number of the flies suddenly surged,” Byun said.

This is not the first time an outbreak of a particular insect has been reported in South Korea.

Stick insects are a recurring headache for Uiwang, Gyeonggi Province, and neighboring cities.

Trees on nearby mountain Cheonggyesan can be seen with sticky tape warped around their trunks as part of the effort to suppress the population of stick insects this summer. 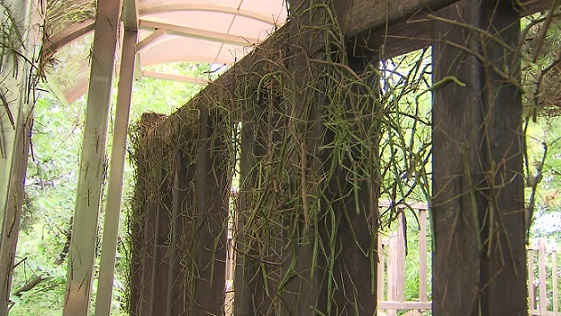 A picture of stick insects that appeared in a public park near Bongsan in Seoul in July. (KBS)
In July 2020, an explosion of stick insects was also reported in areas near the mountain Bongsan in Seoul. The insects, which as the name suggests resemble the twigs among which they live, infested trees as their spawning rate increased due to warmer winter temperatures.

In the same month, Jecheon, North Chungcheong Province, saw swarms of gypsy moths congregate in downtown areas, as more larvae of the bugs survived that year’s winter, which was the warmest since records began to be compiled in 1973.

Some insects can be more harmful, causing damages to crops and agricultural production and posting health hazards to livestock and humans.

But professor Lee of Seoul National University warns against over the over-reliance on the use of pesticides to control pest insects.

“It (the aerial spray of a large amount of pesticide) could disrupt a balanced ecosystem, which can again lead to an outbreak of another insect and it can be harmful. Alternative control measures that pinpoint on the lovebugs, in this case, are more desirable,” he said.

As for lovebugs, aggressive measures may not be needed in the first place.

“Lovebugs spend most of their lives as larvae, with the adults having a lifespan of just two to five days, on average. Many of those flies that appeared in Seoul will soon naturally die,” Lee said.

“Also, they can’t fly far as flies and other insects do, which prevents them from moving to other areas.”

For the time being, one of the possible ways to scare away those mating flies is to spray water as they tend to avoid moisture, said Lee Dong-kyu, a public health professor at Kosin University, in a radio interview with CBS.

They are also attracted to bright colors, so try to wear dark clothes, the expert said. 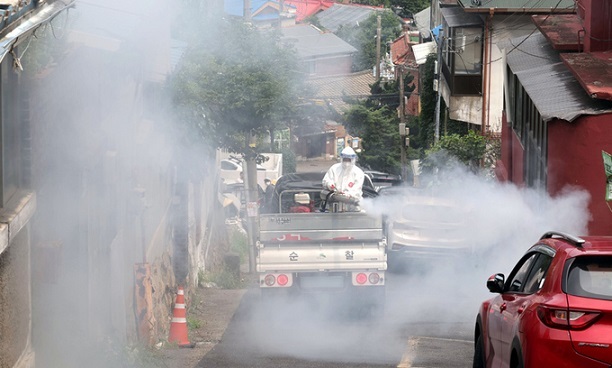 Municipal officials conduct disinfection work against lovebugs in Eunpyeong-gu, Seoul, on Monday. (Yonhap)
Meanwhile, officials at Eunpyeong-gu District Office said they were conducting pest control measures as needed, as a large outbreak like this could cause damage, like when they get into the radiator of a car. The flies could clog vehicle parts and their acidic body could erode cars’ exterior paint, the officials said.