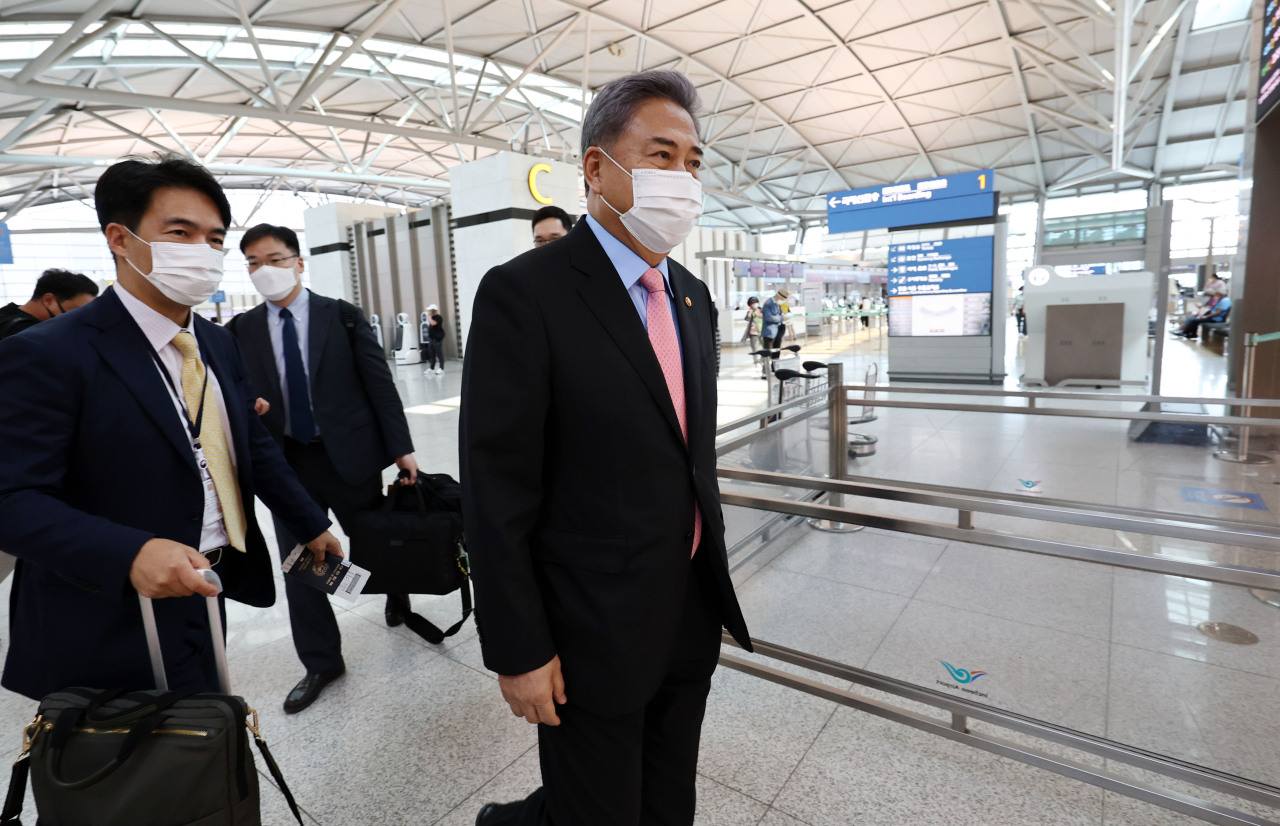 South Korean Foreign Minister Park Jin departs for Singapore at Incheon Airport on Tuesday. (Yonhap)
The foreign affairs chiefs from Seoul, Tokyo and Washington are expected to hold their first face-to-face trilateral meeting as they attend a foreign ministers’ meeting of leading rich and developing nations this week.

South Korean Foreign Minister Park Jin has departed Seoul to attend the two-day Group of 20 summit that is taking place in Bali, Indonesia, from Thursday.

Park will participate in the meeting along with Japanese Foreign Minister Yoshimasa Hayashi and US Secretary of State Antony Blinken. The three are expected to discuss measures on deterring North Korea’s nuclear provocations and other regional issues, including Russia’s invasion of Ukraine.

While Seoul’s Foreign Ministry only said it is currently coordinating meetings with participating countries, a Japanese media outlet reported that the top officials of the three countries will hold a trilateral meeting, citing several government sources.

It would be the first such trilateral meeting since the Yoon Suk-yeol administration was inaugurated in May.

While the chances of a highly-anticipated bilateral meeting of Korean and Japanese ministers happening are low, there may be one between Park and Chinese Foreign Minister Wang Yi, who will also attend the event.

According to the ministry here, it is currently in talks with some 10 countries, including China, in organizing bilateral or small group meetings.

A reception will be held on Thursday, and two sessions are planned on the second day, where the participating ministers will discuss bolstering multilateralism and dealing with the global food and energy security crisis.

The US and other Western countries have blamed Russia’s attack on Ukraine -- the fifth-largest exporter of grain -- for endangering food and energy security around the world, in addition to accusing Moscow of war atrocities. They also claim Russia’s blockade of Ukrainian ports also put a halt to the flow of grains.

Russia, on the other hand, claims the food crisis was brought on by the sanctions Western nations have imposed on it. Russia is the world’s No. 1 grain exporter, but food, fertilizer and seeds are exempted from sanctions imposed by the US and other countries.

The US has slammed Russia for putting the world’s most vulnerable countries at risk with its war.

“It’s Russia’s unprovoked war that has exacerbated the suffering now buffeting the world’s most vulnerable countries,” Ned Price, spokesperson for the US Department of State said in a regular press briefing Tuesday.

“By laying waste to Ukrainian farms and grain silos, stealing Ukrainian grain, and blocking access to and from Ukrainian ports by sea, Russia has increased food security, malnutrition, and susceptibility to disease for the world’s most at-risk populations.”

He added: “G-20 countries should hold Russia accountable and insist that it support ongoing UN efforts to reopen the sea lanes for grain delivery.”

At the G-20 meeting, the US’ state secretary is also holding a bilateral meeting with China’s Wang Yi.

Daniel Kritenbrink, assistant secretary of state for East Asian and Pacific affairs, stressed that the US’ top priority in the bilateral meeting will be on underscoring its commitment to intense diplomacy, and maintaining open lines of communication with China.

“I would expect that in the course of that meeting (between Blinken and Wang), we’ll be able to discuss having guardrails, so to speak, on the relationship so that our competition does not spill over into miscalculation or confrontation,” Kritenbrink said in a press briefing Tuesday.