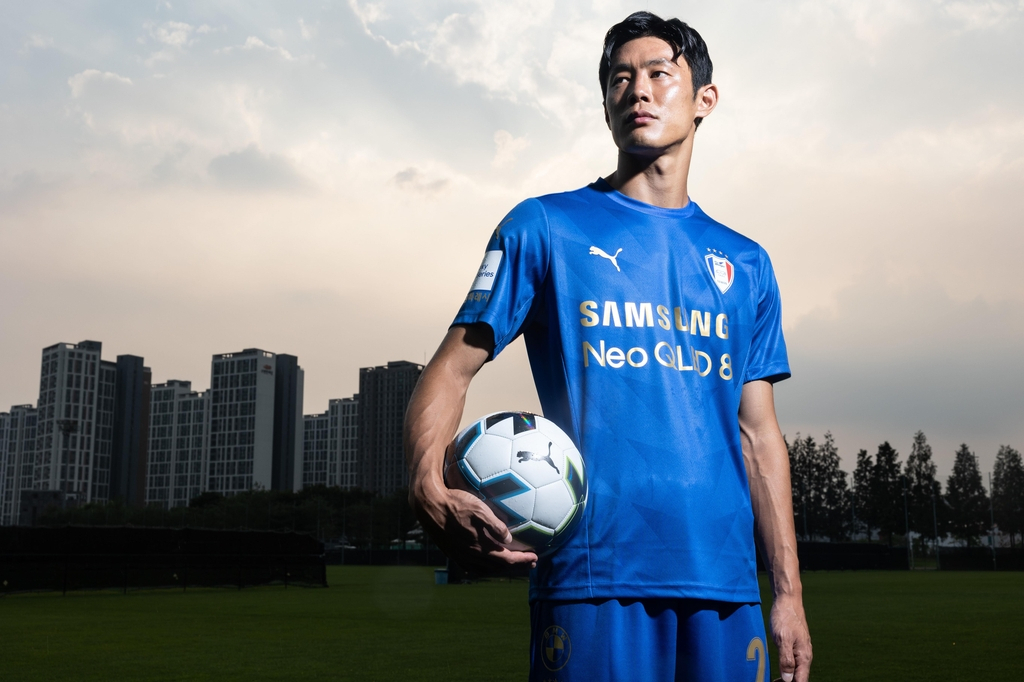 Suwon Samsung Bluewings forward An Byong-jun poses in his new K League 1 club's kit, in this photo provided by Suwon on Wednesday. (Yonhap)

An Byong-jun, a Japan-born football player who has represented North Korea internationally, has joined a top-tier South Korean club after spending the past three-plus seasons in the second division.

Suwon Samsung Bluewings of the K League 1 announced Wednesday they have signed An to an 18-month contract, with an option for an additional term, plucking him from Busan IPark in the K League 2.

Suwon added An, a two-time K League 2 MVP and scoring champion, had first trained with his new club on Tuesday. Suwon are scheduled to host Daegu FC on Wednesday evening.

An, 32, arrived in the K League 2 with Suwon FC in 2019. He led the second division with 21 goals in 2020 and helped Suwon FC earn the promotion to the K League 1. An switched clubs to Busan IPark for 2021 and once again topped all players with 23 goals.

An was voted the K League 2's MVP in both of those seasons.

So far this year, An has scored four goals in 14 matches for Busan. He has netted 56 goals in 91 matches in his South Korea career.

An, who has earned eight caps for North Korea, will now test himself against South Korea's top competition, though the opportunity could have come even earlier. After the end of the 2020 season, Gangwon FC in the K League 1 had tried to acquire An in a trade, but the club raised an issue with An's surgically repaired right knee and nixed the deal. He had undergone the procedure while playing in Japan before coming to South Korea

An ended up back in the K League 2 with Busan, and Suwon saw no problems with An's knee as they acquired a forward that they hope will boost their feeble offense.

Entering this week, Suwon were ranked 11th among 12 teams in the K League 1 with 19 points. They are dead last with 13 goals scored in 19 matches. (Yonhap)