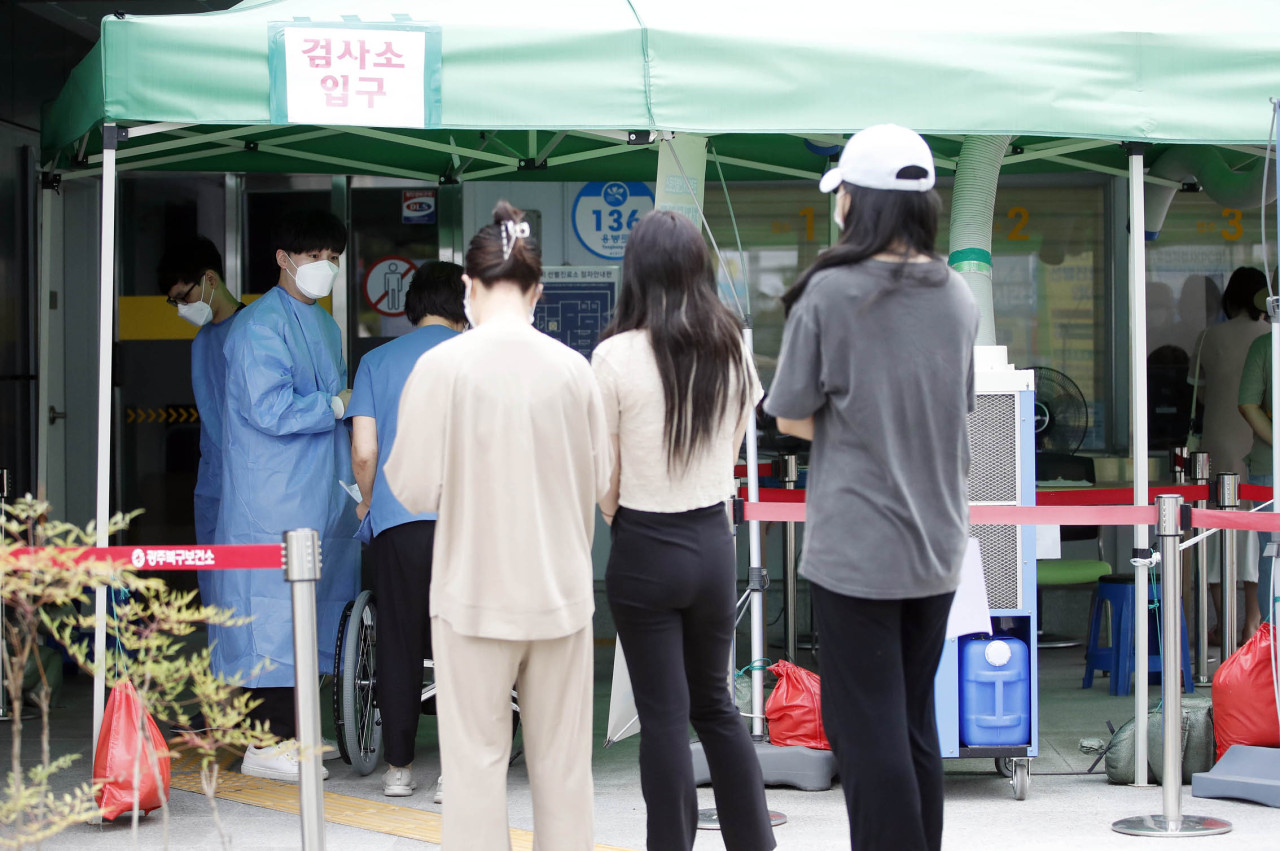 People wait at a COVID-19 testing station in Gwangju, Tuesday. (Yonhap)
S. Korea’s daily COVID-19 infections reached the highest in the recent 40 days, raising concerns about a possible resurgence during the summer season.

According to the Korea Disease Control and Prevention Agency, the country added 18,147 new COVID-19 infections during the 24 hours of Monday. The total caseload reached 18,413,997.

The daily tally reported on Tuesday nearly doubled from 9,894 a week ago. It was also the biggest increase since last week when the country started to see signs of resurgence.

Last week, the country snapped a three-month downward trend, which had continued since the third week of March.

Health authorities noted that the reproduction rate last week also increased to 1.05, surpassing 1 for the first time in 14 weeks. A reading over 1 means that each person who catches the virus will spread it to more than one other person on average, indicating accelerating spread. A reading below 1 means the virus’ spread is fading.

Infections from the high-risk population, aged 60 or above, too, increased to 8,206 last week from 7,657 another week prior, but the proportion decreased to 13.7 percent from 15.5 percent a week prior.

The number of new severe cases reported during the fifth week of June went up 19 percent to 50, from 42 a week ago. The number of deaths reported last week, however, fell to 46 from the previous week’s 89.

The hospital bed occupancy rate for critically ill patients is currently under 10 percent, the government added.

Citing the low number of deaths from COVID-19, as well as the relatively small proportion of infections in vulnerable groups, the government considers the current pandemic risk as low.

Authorities say they will carefully monitor how the new omicron subvariants develop in the country, and their future impacts on the number of severe cases and deaths, it added.

The government also admitted that it is difficult to rule out the possibility of a resurgence during the summer.

During a COVID-19 response meeting Tuesday, the government added it was discussing with experts whether to offer another COVID-19 booster shot -- the fourth when the initial shot is included -- in case the pandemic worsens.