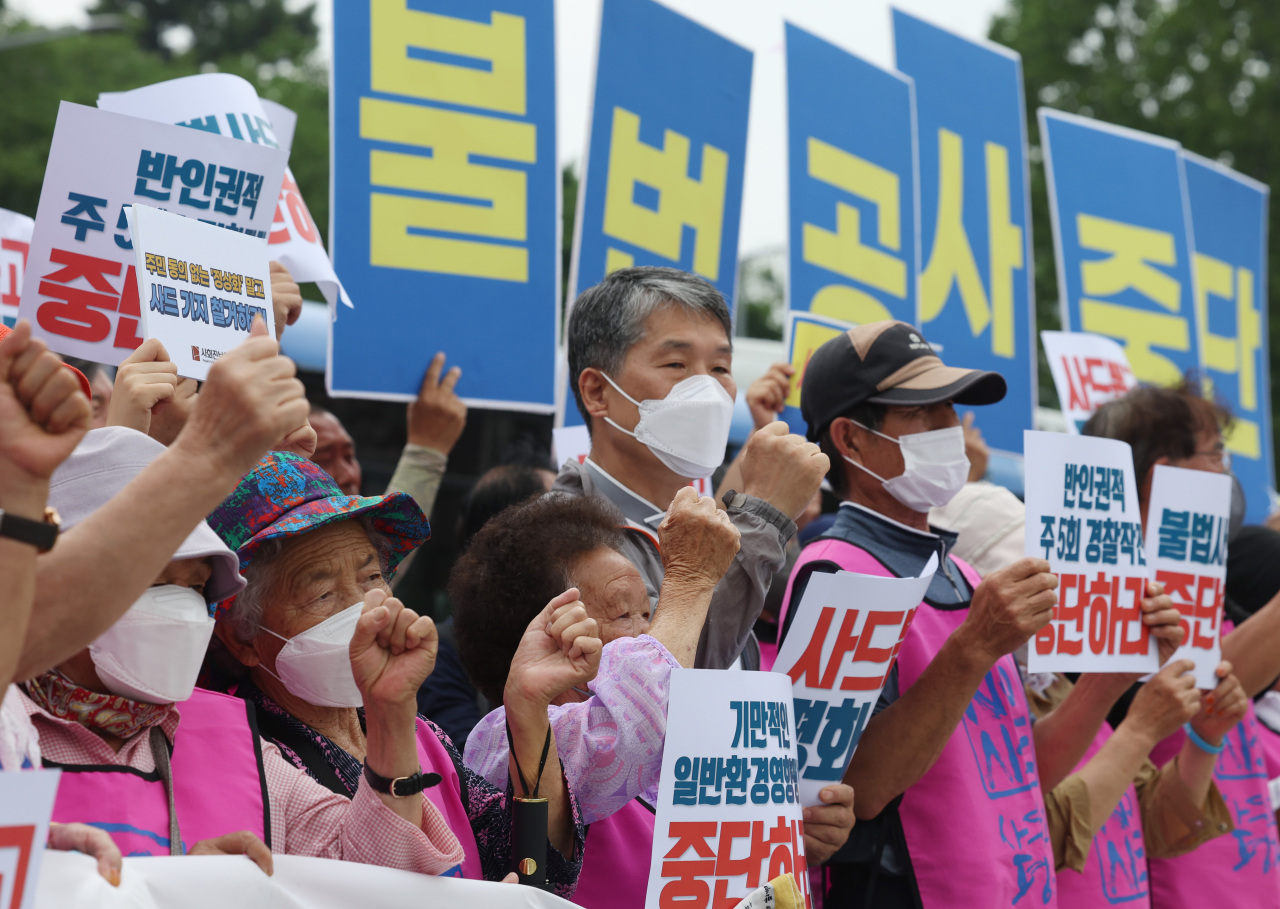 Residents in Seongju County and the city of Gimcheon located in the vicinity of the THAAD base staged rallies in front of the presidential office in Yongsan on June 23 to protest against the Yoon government’s plans to ensure full-scale operation of the THAAD anti-missile system. (Yonhap)
The new South Korean government has hit a roadblock with its plans to expeditiously normalize the operation of the military base that hosts the US-made Terminal High Altitude Area Defense system.

The Yoon Suk-yeol government has not yet taken the first step to begin a long-postponed environmental impact assessment, which is legally required to repair and refurbish the THAAD base to ensure its full capacity, South Korea’s Defense Ministry confirmed to The Korea Herald on Tuesday.

The US THAAD missile defense battery has been temporarily deployed on the now-shuttered Lotte Skyhill golf course in Soseong-ri, Seongju County, North Gyeongsang Province, since 2017. South Korean and US military personnel have been living in shipping containers and an old golf clubhouse.

The composition of a government-civilian consultative body should precede the general, full-scale environmental impact assessment of the THAAD deployment.

But the Yoon government has not made any progress in setting up the body due to the lack of cooperation from residents in Soseong-ri village.

South Korea’s Environmental Impact Assessment Act stipulates that the council should include at least one representative of local residents along with civil experts, officials from related provincial governments and Environment and Defense ministries. An official representing Seongju County was appointed on June 24 accordingly.

South Korea’s Defense Ministry has sent two letters to request the local community recommend persons to represent residents in the area of Soseong-ri since mid-June.

But the local community has not yet appointed their representatives, which has created setbacks for the Yoon government to implement its public pledge to normalize the operation of the THAAD base.

The Defense Ministry on Monday sent another official letter seeking representatives of the local community, setting the deadline for Monday.

When the council is established, the Yoon government will be able to expeditiously proceed with the multistage environmental impact assessment, which generally takes more than one year.

When the environmental survey begins, the Defense Ministry also plans to concurrently initiate the process to provide the remaining land within the THAAD base with the United States Forces Korea to enable them to renovate the old golf course and construct roads.

South Korea and the US are currently in consultations on the scope of the land, the Defense Ministry confirmed Tuesday.

How to garner local support?
But questions remain about whether the Yoon government is able to garner support from residents who have opposed the THAAD deployment for almost five years.

Residents in Seongju County and the city of Gimcheon located in the vicinity of the THAAD base staged rallies in front of the presidential office in Yongsan on June 23 to protest against the Yoon government’s plans to ensure full-scale operation of the THAAD anti-missile system.

Opponents have mainly expressed concerns that electromagnetic waves could harm nearby people’s health and contaminate agricultural products despite the government’s announcement.

In 2017, the South Korean government said the level of electromagnetic radiation emanating from the THAAD system’s radar had no detrimental impact on human health after conducting a small-scale environmental impact assessment.

The Moon Jae-in government also opted to hold up the process of forming the consultative body mainly because of the opposition of the local community after its abortive attempt in 2019.

Defense Ministry deputy spokesperson Moon Hong-sik said Tuesday that the ministry will make every effort for local residents to participate in the environmental impact assessment during a regular press briefing.

The Yoon government has reiterated the significance of assuring an environment for the normal operation of the THAAD anti-missile battery at an early date since campaigning.

The US also has repeatedly called for South Korea to guarantee routine, unfettered access to the THAAD site, which is likely to provoke backlash from China.

Gen. Paul LaCamera in May underscored that “unfettered access is required to fully ensure logistical support at the site, and improve the quality of life for Service members stationed there” in a written statement presented to the House Appropriations Subcommittee on Defense.

“Limited access also slows the pace of construction projects on site which is critical for maintaining the system’s capabilities, crew training, and upgrades,” the USFK commander said. “All of this hinders the Alliance’s ability to operate this defensive system and defend the ROK people, as well as US and ROK service members.”

The issue has been discussed at defense-ministerial meetings, including the latest held in mid-June on the margins of the Shangri-La Dialogue Asian security summit in Singapore.