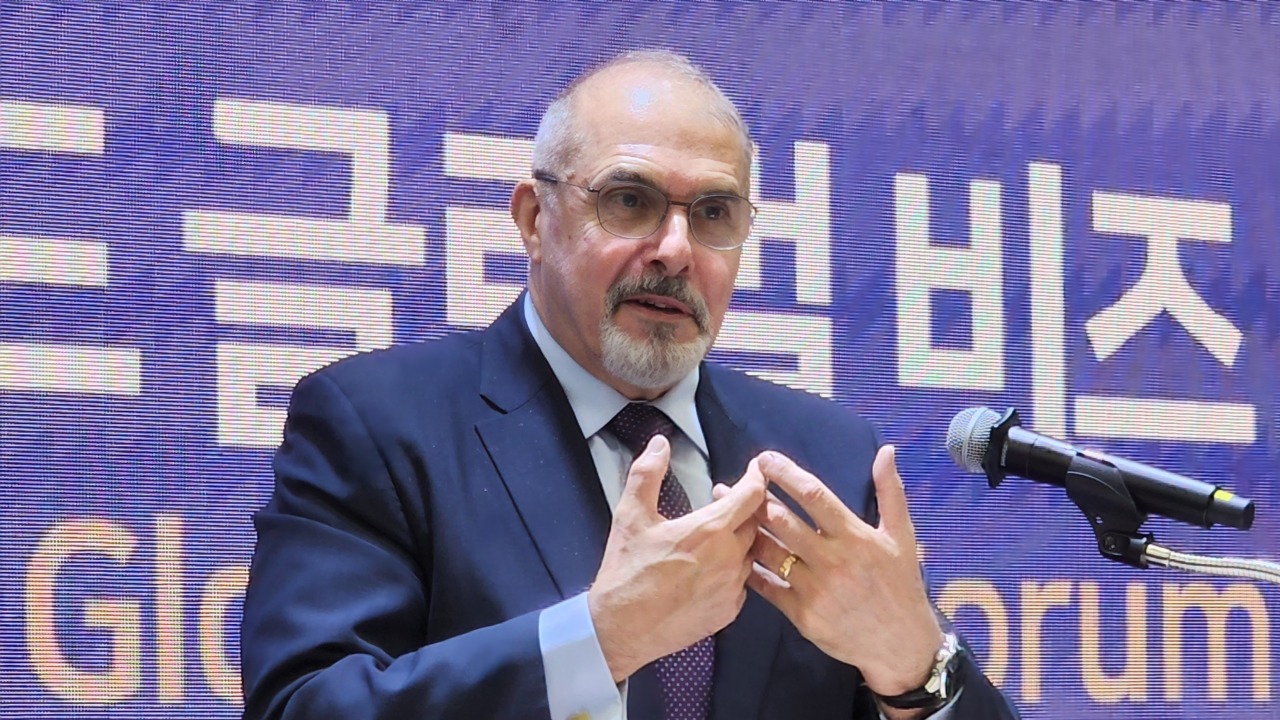 “Increasing France-Korea ties in critical value chains can bring about more resilience and prosperity to both France and Korea,” Lefort said, adding that by producing in France, Korean companies can guarantee access to the full European market, diversify production and reduce operational risks. 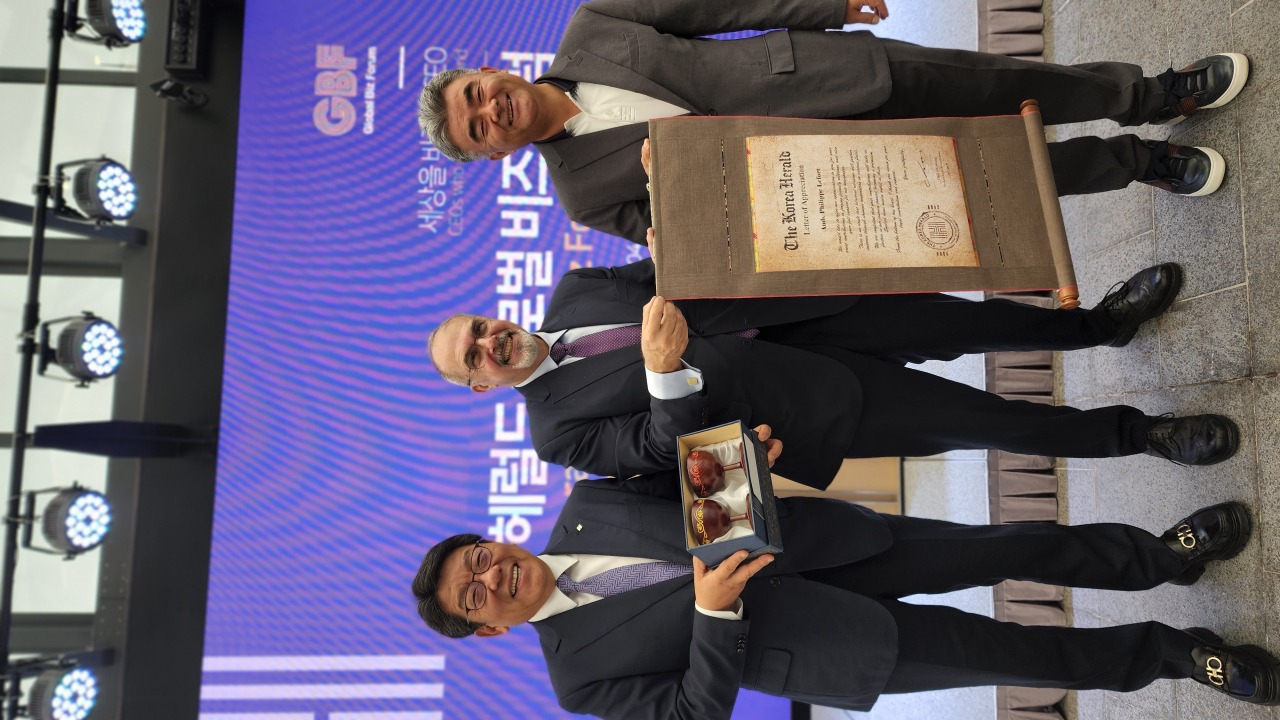 Herald Group Chairman Jung Won-ju (third from left) and The Korea Herald CEO Choi Jin-young (left) present a letter of appreciation to French Ambassador to Korea Philippe Lefort at the second session of The Korea Herald’s Global Business Forum at the Ambassador Hotel in Seoul, June 29. (Jenny Sung)
“France 2030 covers, among other sectors, electric vehicles, nuclear energy and semiconductors,” he said, highlighting convergence with Korea’s own priorities and future avenues for industrial cooperation is very clear.

“Korean companies will enjoy benefits of France as a business location, such as its low-carbon electricity mix with close to 75 percent nuclear share, its top engineering schools, its infrastructure and its support to research and development,” said the ambassador.

The ambassador highlighted Korea’s emergence from postwar devastation to today as one of the top economies on the planet with leadership in key technologies and value chains such as electronics, automobiles and shipbuilding.

“France-Korea relationship is also both anchored in the past, and geared towards the future” he added. 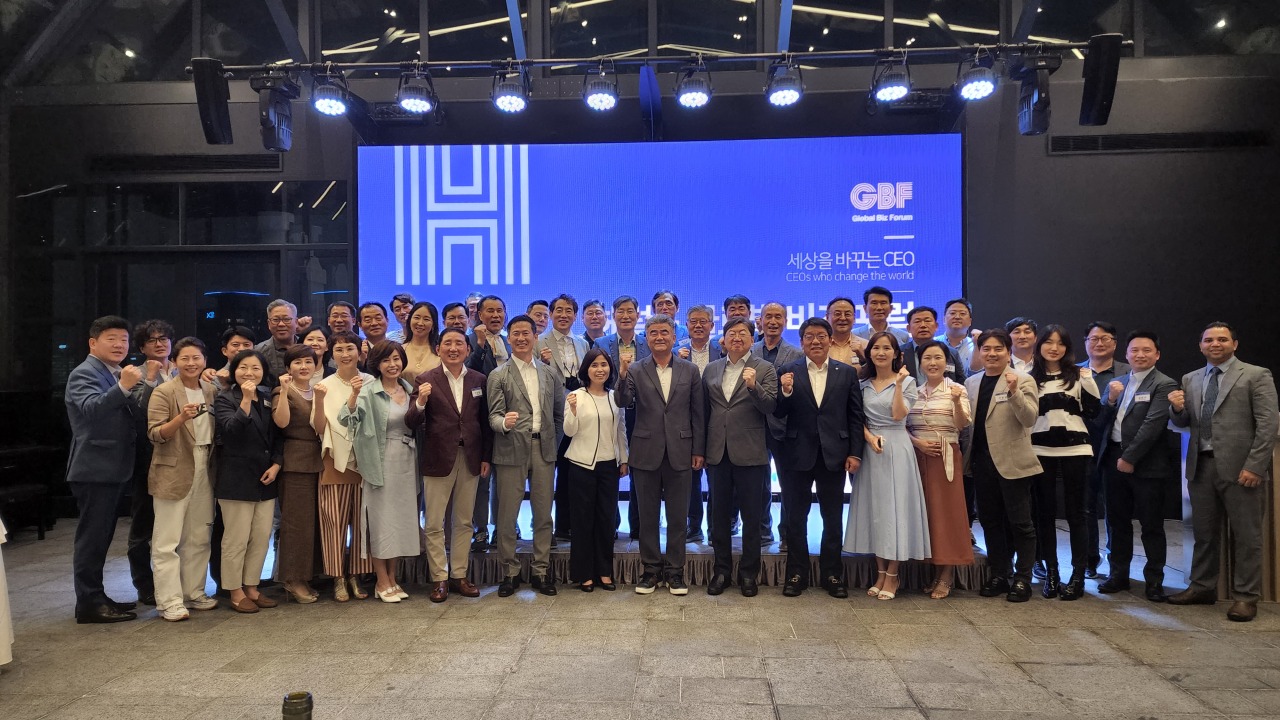 CEOs and guests pose for a group photo at the second session of The Korea Herald’s Global Business Forum at the Ambassador Hotel in Seoul, June 29. (Jenny Sung)
Lefort recalled France’s cooperation with Korea in its postwar reconstruction, such as in the telecommunications network.

“France has been a key partner to Korea’s entry into its modern era, with the development of Korea’s high-speed train, today known as KTX, in the 1990s,” said Lefort. “French companies also supported Korea’s industry rebound following the Asian crisis,” Lefort said, referring to the 1997 Asian financial crisis and citing cooperating in automotive sector through Renault Motors Korea.

“Ten years ago, the EU-Korea free trade agreement gave a tremendous boost to France-Korea trade and triggered another wave of cross-border investment, including among SMEs and startups,” he stressed.

Lefort defined the France-Korea relationship as resilient in the face of global turmoil, citing bilateral trade data in 2020 that only declined by 8 percent, half of France’s trade decline globally.

“In 2021, France-Korea trade was above the pre-pandemic level, hitting for the first time the $10 billion threshold,” stressed the French ambassador.

According to Lefort, France has unrolled an enormously ambitious pro-business agenda with concrete achievements on taxation, labor regulations and competitiveness over the past few years.

He highlighted France as the top European destination for foreign investment projects three years in a row, ahead of the UK and Germany citing a recent report by EY, formerly Ernst & Young.

Lefort expressed hope that strategy would sustain and be amplified after the reelection of President Macron a few weeks ago for another five years and rest assured.