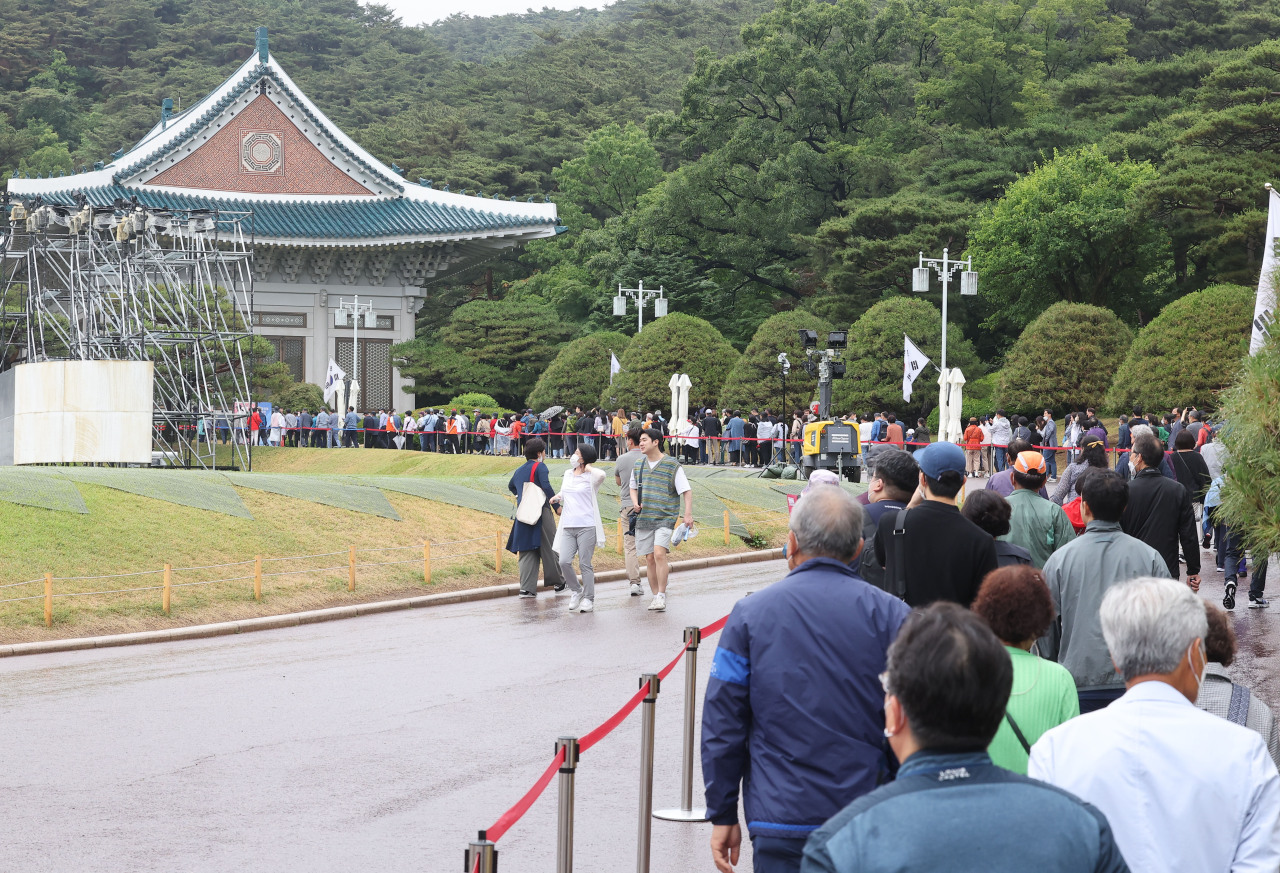 Visitors wait in line to visit the main office of Cheong Wa Dae on June 15. (Yonhap)
Nearly two months since the opening of Cheong Wa Dae to the public, the fate of the former presidential compound remains unclear, leading to concerns among experts and the public alike.

One of the key pledges by the Yoon Suk-yeol administration, “to return Cheong Wa Dae to the public,” was implemented on the day of the inauguration. But little preparation was made for the opening itself, and even less thought appears to have been given to the future of the grounds.

The large influx of visitors -- more than 1 million have visited Cheong Wa Dae since May 10 -- has led to many cultural artifacts being damaged and the grounds littered.

Meanwhile, some important questions remain unanswered: How much longer should Cheong Wa Dae remain open for free access to the public? To what extent should the grounds be preserved and what purpose should it serve?

Since it opened to the public, Cheong Wa Dae has hosted three megasized events so far: KBS’ “Open Concert,” a Netflix show with singer Rain and an episode of SBS entertainment show “Master in the House” that aired Sunday.

“I hold a positive view of the opening itself, since such public awareness and efforts to study the compound would not have been possible without the decision (to open Cheong Wa Dae),” Kim Seong-do, head researcher of the National Research Institute of Cultural Heritage, told The Korea Herald.

“However, there should be boundaries and limits, since preservation efforts inevitably have set timelines.” Kim also alluded to the SBS show that aired Sunday, expressing disappointment in its focus on how grandiose the buildings are rather than highlighting stories with historical implications that trace back to the Goryeo Kingdom.

Visiting Cheong Wa Dae on June 17, the 12 members of the Cultural Heritage Committee expressed concerns about the site being exploited as a mere tourist attraction.

Experts agreed that studying and defining Cheong Wa Dae is a work in progress that requires a considerable amount of time.

“Next month, the committee will decide on the designation of presidents’ commemorative trees as natural monuments,” said Jeon Young-woo, head of the Cultural Heritage Committee. He added that the Cultural Heritage Administration must be given full power if Cheong Wa Dae is to be maintained as a valuable cultural heritage site.

Meanwhile, Culture Minister Park Bo-gyoon, at a press conference Monday, said the ministry would consult the Cultural Heritage Administration and other relevant ministries and experts to turn Cheong Wa Dae into a “cultural complex.”