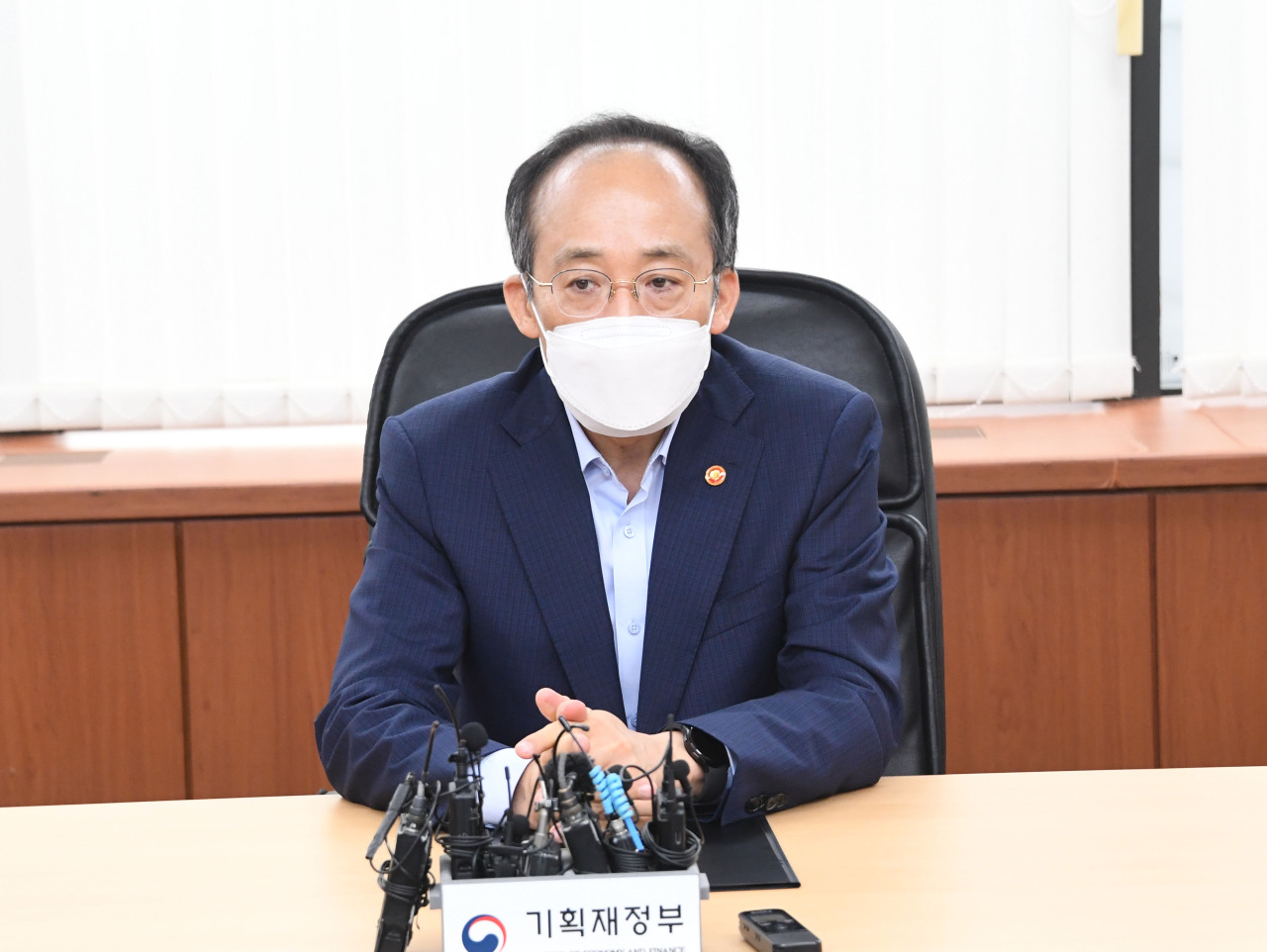 Finance Minister Choo Kyung-ho speaks during a meeting of the country’s five economic chiefs Monday. (Finance Ministry)
The Finance Ministry said Monday that the government would respond to any signs of economic weakness before it turns into a crisis by closely tracking indicators pointing to a worsening outlook, like inflation or recession, ahead of the Bank of Korea’s rate hike next week.

The five chiefs -- who last met a month ago amid growing concerns over “stagflation,” a coupling of low growth and high prices -- acknowledged that Korea still faces a growth slowdown as persistent inflation, caused by a global surge in commodity prices, prompts the central bank to increase borrowing costs.

The Bank of Korea, which is expected to break with tradition and raise the benchmark rate by 50 basis points instead of 25 on July 13 to tame inflation, has warned that Asia’s fourth-largest economy could see the annual increase in consumer prices this year reach a 14-year high.

How much consumer prices accelerated in June, to be revealed Tuesday, will weigh on the rate decision, according to the BOK, which said prices will rise faster in June than in May, when they rose 5.4 percent from a year prior.

While the central bank has not discussed how big an annual increase it expects in June, Finance Minister Choo Kyung-ho said last month he was betting on a 6 percent jump, which would be a 23-year high. Korea would see record-high inflation in July or August, if not June, he added.

“If the risks materialize, Korea’s export-led economy will have to deal with soaring prices and a bigger hit to its industrial output,” the report said.

Producer prices for half of all industrial goods have grown at least 5 percent this year, with 40 percent of the goods showing at least a 10 percent jump in prices, the report added, noting however that the price surge had a smaller impact on the Korean economy than its rivals.

“We need to look at how global supply chains pan out and where our weaknesses lie so we can prepare contingencies,” the report said.

A day earlier, Choo said that the government would help Korean companies sell more goods overseas by offering more loans at an emergency meeting of Cabinet members handling the economy.

The meeting was held two days after Trade Ministry data found Korea’s exports snapped 15 months of double-digit growth in June, stoking recession worries for the economy, which relies heavily on exports for growth.