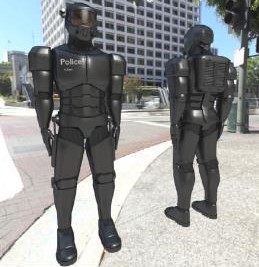 The plans were part of a police policy outline obtained by Yonhap News Agency on police use of robotics, artificial intelligence and advanced mobility technologies, and extending operations to the metaverse.

According to the policy outline, the national police force plans to deploy self-piloting robots, automated cars and exoskeleton suits to aid body movement by 2050.

Titled “Police Future Vision 2050,” the NPA blueprint suggests five key strategies and 14 projects designed to help the law enforcement agency adapt to the fast-changing security environment along with technological advancement. The agency said the goal is to shift the police force away from a heavy reliance on manpower and human contact to an approach based on AI and science.

In one of the 14 projects, the NPA said it could build an integrated operating system to support and control officers dispatched to the crime scene. 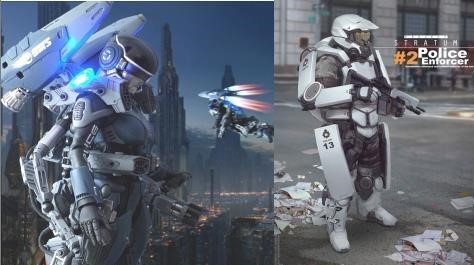 Concept images of the “Iron Man Police“ that is set to be developed by the National Police Agency by 2050 (National Police Agency)
The “Iron Man Police” project involves developing wearable suits that increase officers’ strength. It features an AI security advisory system similar to the superhero’s artificial intelligence butler Jarvis. The necessary technology is set to be developed by 2027.

Dogs will no longer be the only four-legged friends accompanying officers, according to the report, as police would seek to acquire autonomous quadruped robots to patrol dangerous areas.

Autonomous patrol cars and flying patrol vehicles will also be incorporated by 2027.

In the long term, it envisions having police officers work remotely from the 112 Situation Room and instead send out automated patrol cars and devices, which can search, record and send data, to the field. Plans to introduce an automated “mobile police station” are also on the table.

The NPA is also planning on creating a “Meta NPA” office to tackle cybercrimes on metaverse platforms. It will patrol the alternate reality using “AI Metapolice” avatars.

The police agency will be restructured, and new departments focusing on scientific research and training will be created to better facilitate this technological shift, it added.

The NPA Future Vision Committee, led by the president of the Korea Advanced Institute of Science and Technology, professor Lee Kwang-hyung, was scheduled to officially announce its future policy in June. The announcement was postponed in the absence of a police chief.