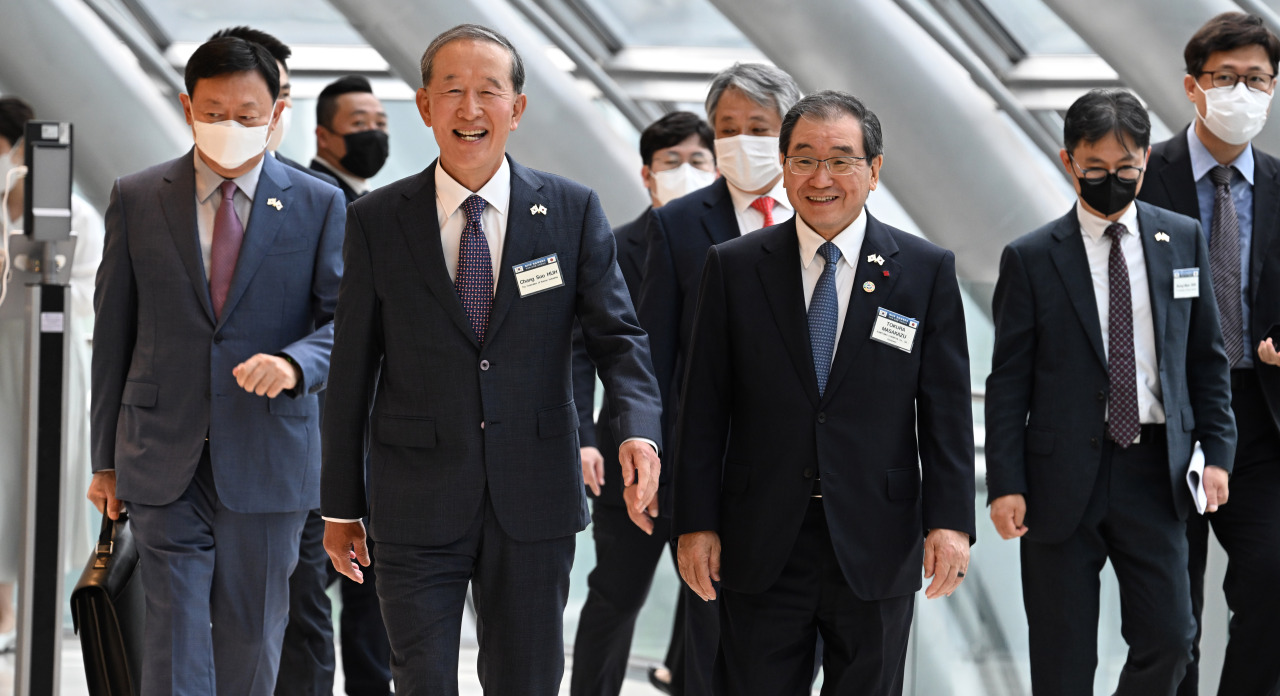 The two business lobbies have held an annual meeting, known as the Korea-Japan Business Council, since 1982. However, the last two gatherings were postponed due to the protracted pandemic.

Monday’s meeting saw more than 20 business leaders from the two countries coming together to discuss pending issues, including business sentiment in South Korea and Japan, the economic outlook, sustainable growth and other geopolitical affairs.

The two groups agreed there is an urgent need for the two governments to hold a summit in order to mend soured bilateral ties long strained over wartime history and trade disputes. The two countries last held summit talks in China in 2019.

They pledged their combined efforts to push for a summit, reaffirming their commitment to a 1988 joint statement between then-South Korean President Kim Dae-jung and then-Japanese Prime Minister Keizo Obuchi.

The historic declaration is considered to have paved the way for close cooperation between the two neighbors. At the time, Obuchi expressed “keen remorse” and apologized for the damage and pain his country inflicted on Koreans during its 1910-45 colonial rule of the Korean Peninsula.

“We must look to the future, not the past, and upgrade the joint declaration, which emphasizes cooperation in all fields, to fit the present,” FDI Chairman Huh Chang-soo said during the meeting.

“The more difficult the relationship between Korea and Japan becomes, the more important it is to respect the spirit of the declaration and move forward together toward the future,” he said.

As part of efforts to accelerate exchanges between the two countries, the business leaders also called for lifting export restrictions on key materials and the resumption of mutual visa waiver programs.

Korean leaders also asked for Tokyo’s support of Seoul’s entry to the Comprehensive and Progressive Agreement for Trans-Pacific Partnership, a regional economic alliance of 11 nations. Japan has been lukewarm about Korea joining the alliance, citing Seoul’s import ban on its seafood from the Fukushima area due to radiation concerns following the 2011 Fukushima nuclear power plant meltdown.

Later in the day, the Keidanren leaders also paid a visit to President Yoon Suk-yeol at his presidential office, during which the president reiterated his will to improve bilateral ties of the two countries.

It was a rare occasion in which the nation’s top four chaebol groups attended an FKI event after they departed from the lobby in 2016, following the organization’s role in the influence-peddling scandal involving former President Park Geun-hye.