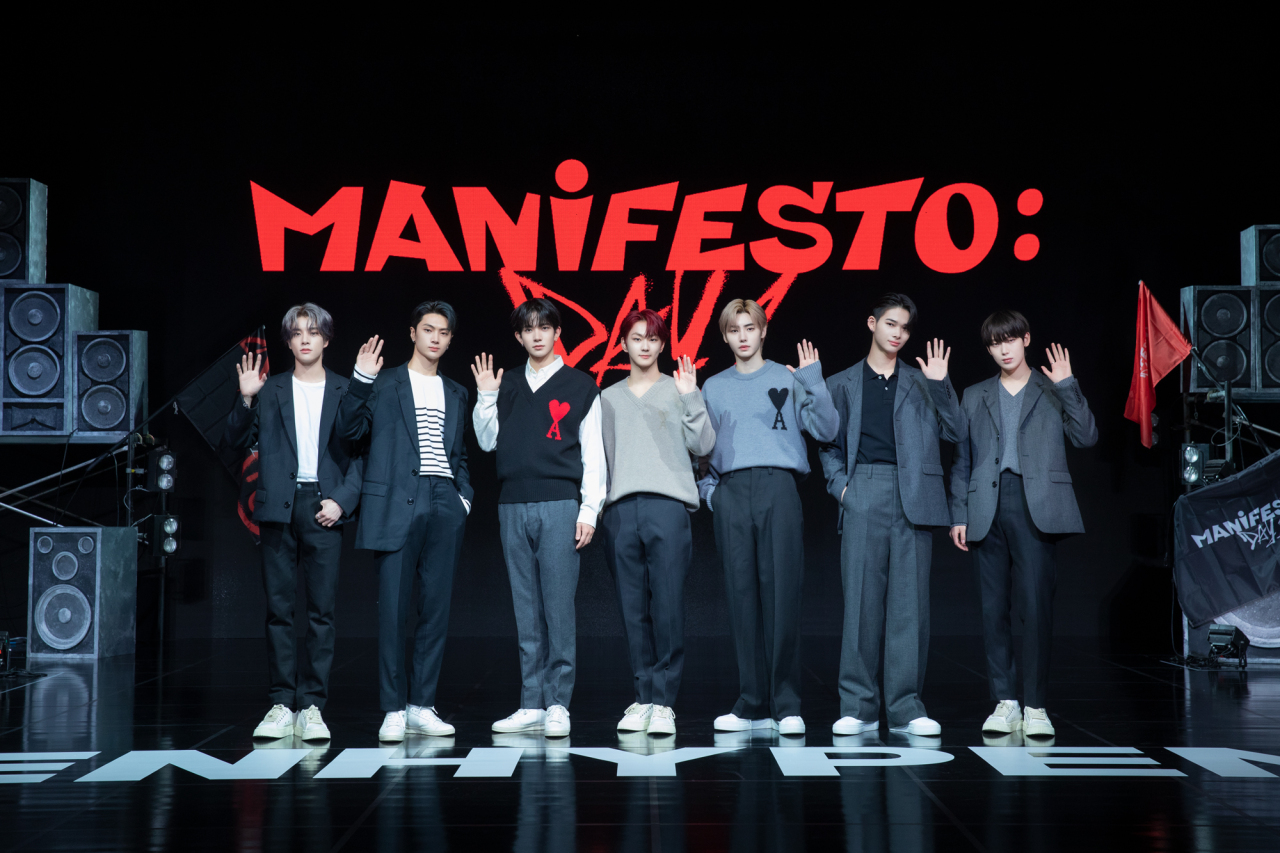 This marks the K-pop act’s return nearly six months after it released “Dimension: Answer” in January.

“Manifesto: Day 1” tells the story of the seven bandmates with doubts about the meaning of “success.” The EP is aptly named -- Enhypen marches forward to find the word’s true definition and shouts to the world that they will refuse to heed what others say by carving out their own path.

In a press conference Monday, Jake described the it as “an album that shows a new side of Enhypen.” 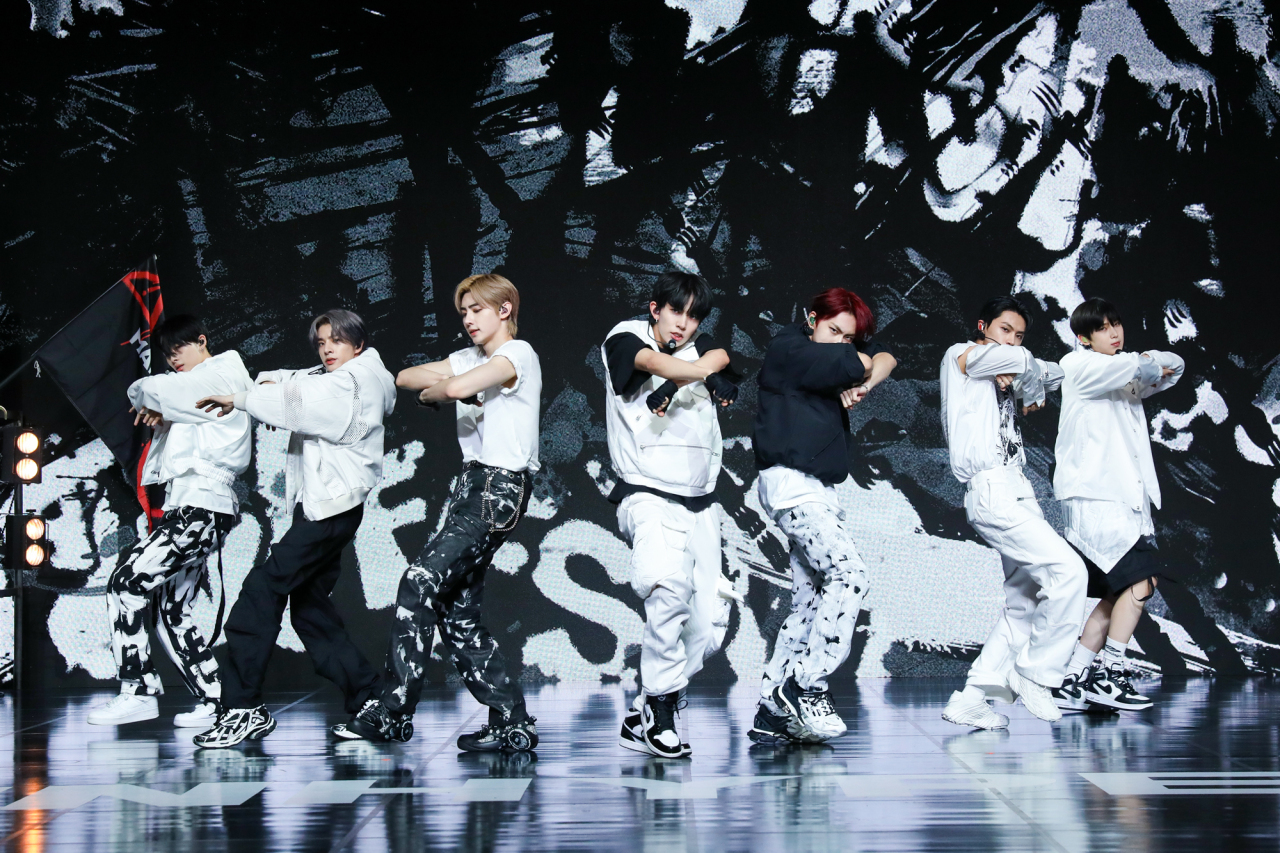 Enhypen performs “Future Perfect (Pass the Mic),” at a press conference in Seoul on Monday. (Belift Lab)
“Apart from the underlying message it carries, ‘Manifesto: Day 1’ branches out to a different side of us. We felt the need to show the best of us and prove why so many people love us.”

Sung-hoon added, “Since Enhypen takes the initiative to create a change, it’s an album that asks the younger generation, those of our age, in particular, to hop on the manifesto, which is the title of our album.”

The group’s new EP is a jam-packed six-track package that consists of main single “Future Perfect (Pass the Mic)” alongside “Walk the Line,” “ParadoXXX Invasion,” “TFW (That Feeling When),” “Shout Out” and “Foreshadow.

Jung-won talked about the lead single, which features a Chicago drill style of trap music. He said the tune would be a unique encounter for Korean pop music lovers. 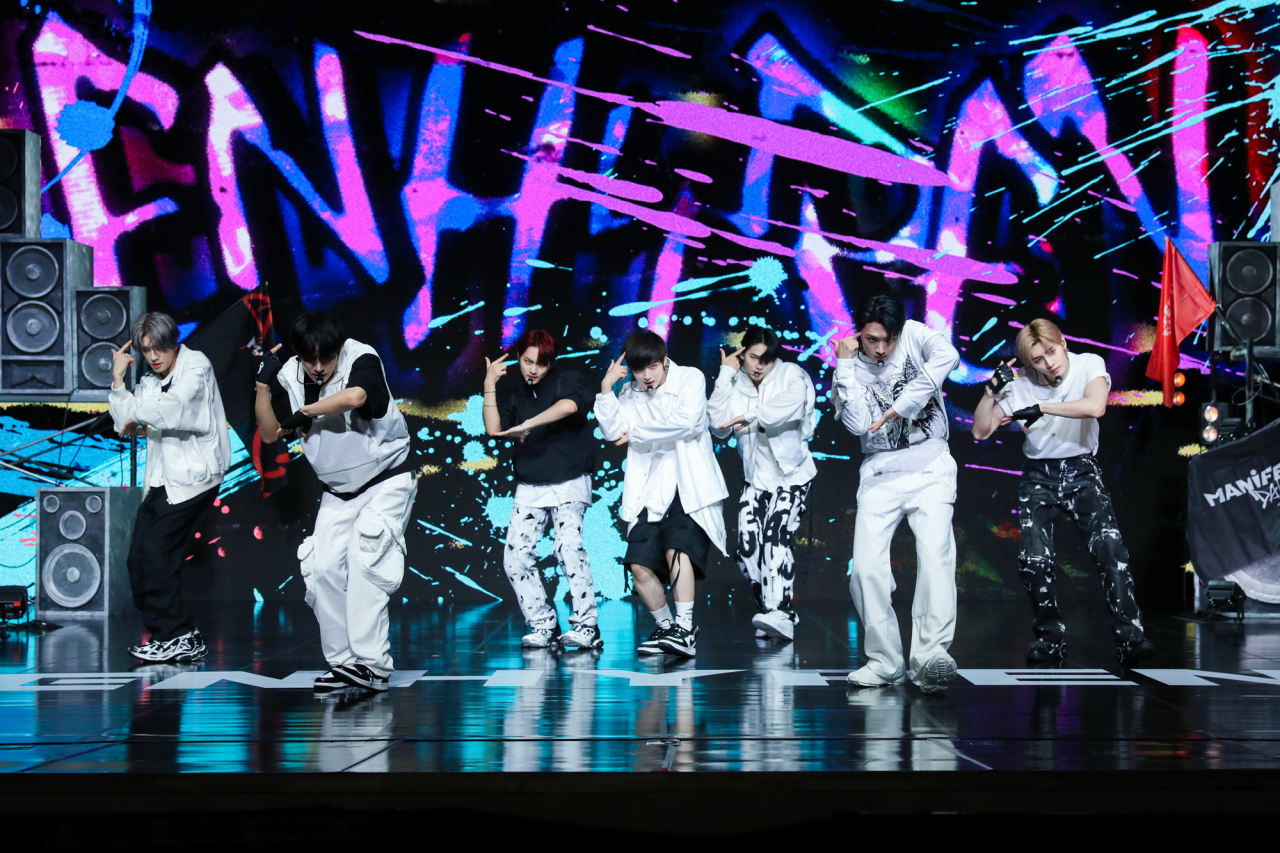 Enhypen performs “Future Perfect (Pass the Mic),” at a press conference in Seoul on Monday. (Belift Lab)
“Like how English has a future perfect tense, our main track promises for the future and conveys feelings of hope. The song is based on frenzied beats, but the title and the overall message are optimistic,” Jung-won added.

Jay shared his first impression of the music, saying it was fresh and shocking.

“I was bowled over by it because I was new to the genre. I tried to get familiar with the song, and as a result, it turned out that it well blends with Enhypen’s musical style.” 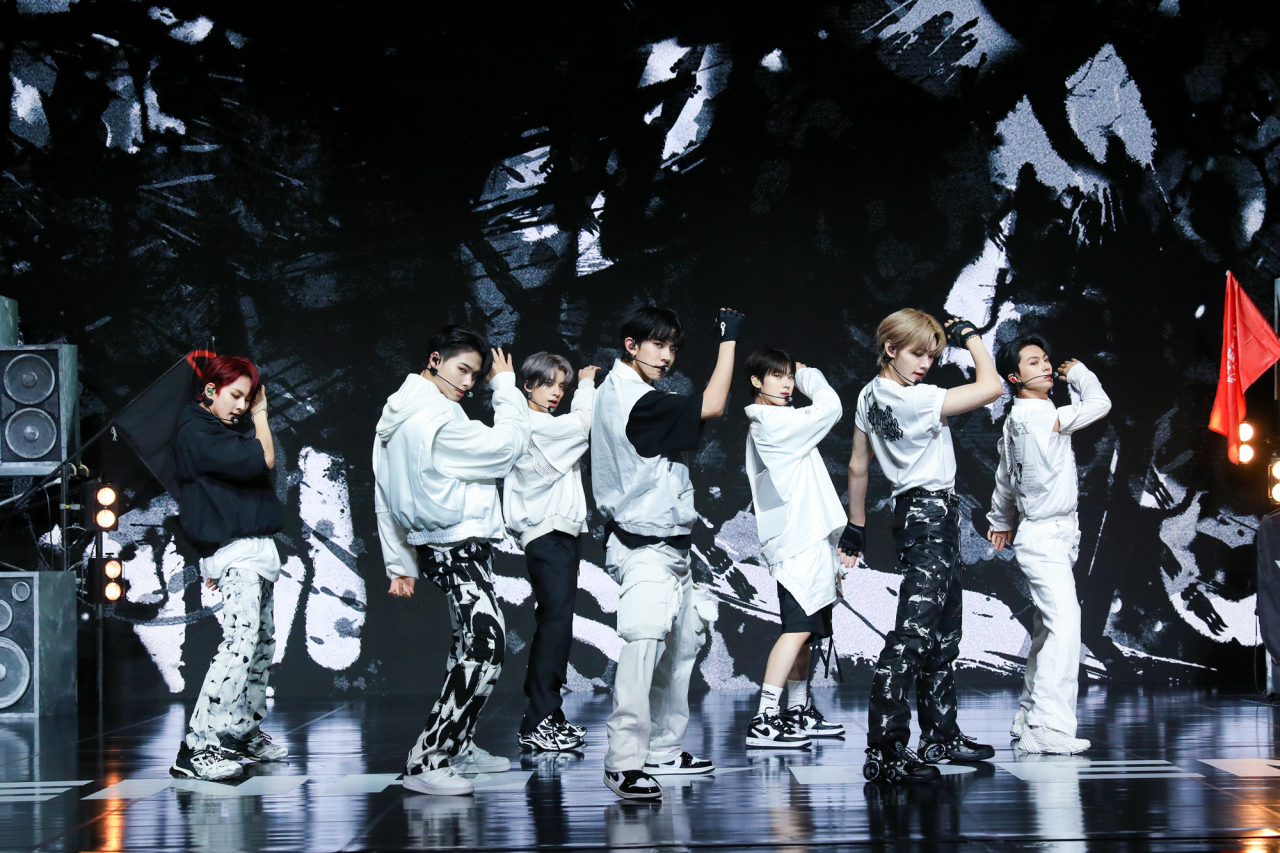 Enhypen performs “Future Perfect (Pass the Mic),” at a press conference in Seoul on Monday. (Belift Lab)
Asked about how it was working with Hybe Chairman Bang Si-hyuk, who took part as a producer for the band’s album, Jay said, ”Bang Si-hyuk said he saw a lot of passion in us. It was a big motivation.”

Jake also listed himself as a lyricist on the album, writing “Shout Out.”

“It’s an alternative rock genre track that allows us to interact with fans during concerts. It’s a song I wrote while thinking of Engenes,” he said, referring to the band’s official fandom.

Enhypen has undergone a seismic change. The band bid farewell to its “hyphen” series for the song’s title -- it had always used a hyphen for its title track to connect, discover and create something new.

When asked why, Jake replied, “Our album shows how we’ve musically grown.”

Although he did not elaborate on what that change meant, Jake said it could be interpreted as an extension to the seven-piece act’s universe.

“We’ve chosen to mature through our new album and wish to have different music styles tailored to us in the future.”

Enhypen poses during a press conference for “Manifesto: Day 1,” in Seoul on Monday. (Belift Lab)
Known for synchronized performances and dynamics on the stage, Sunoo teased a snippet of the group’s choreography.

“As the title of our main song suggests, our dance moves require using microphones. There’s a choreography called a ‘mic test’ move, a part where we hold our microphones up high and dance groovy.”

“I’m excited to meet fans around the globe since we made our debut during the COVID-19 pandemic. I’m ready to revel in fan chants, and we’re preparing and practicing hard to do our best on tours,” Jung-won said.

Hee-seung grinned and said he most looks forward to seeing the audience wave at different concert venues.

The six-track package was released via global music platforms on Monday at 6 p.m.