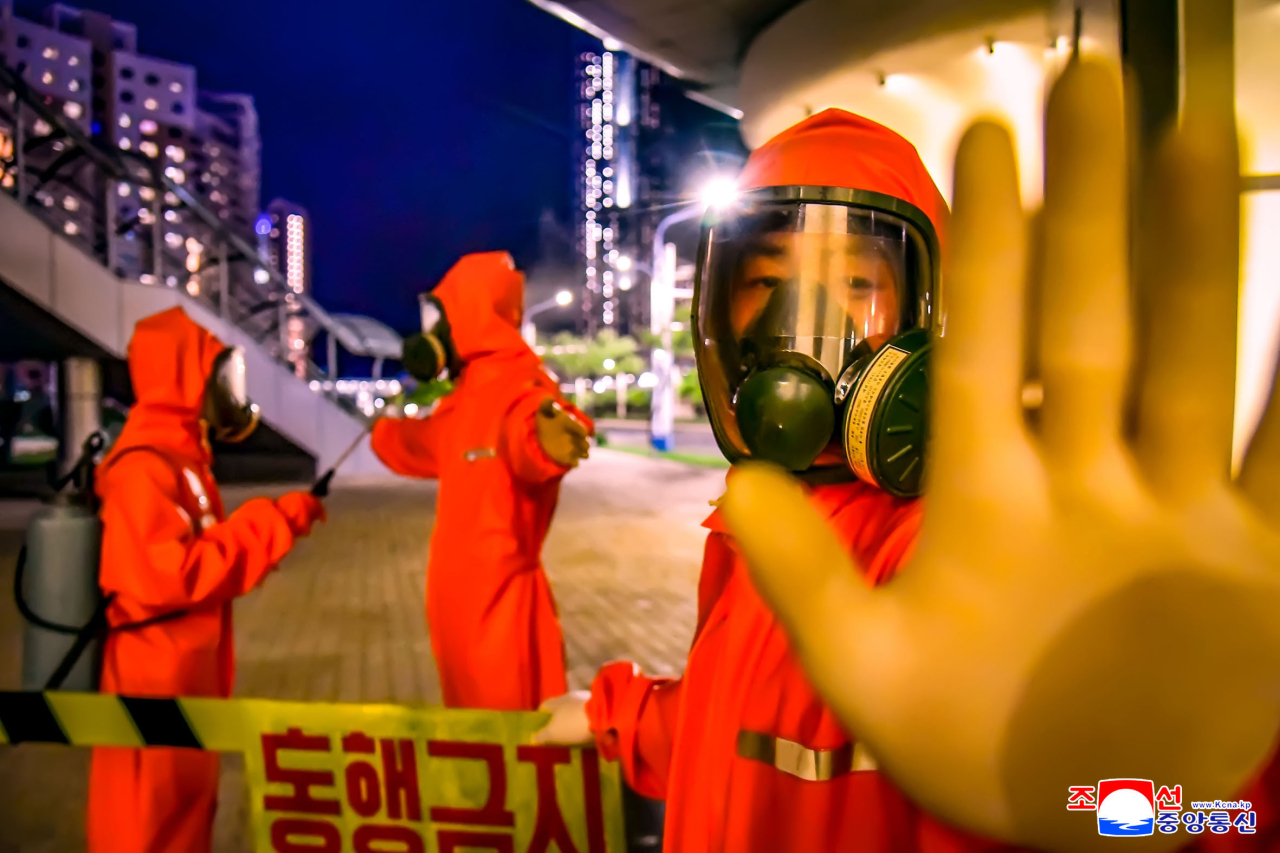 This photo, released by North Korea`s official Korean Central News Agency on June 7, 2022, shows workers sanitizing the capital city of Pyongyang. (Yonhap)
North Korea has tightened vigilance on “alien things” falling near the inter-Korean border and stepped up border controls and restrictions to prevent the spread of the COVID-19 pandemic, according to state media reports.

North Korea has taken follow-up measures in response to the recent investigation findings on the origins and inflow of COVID-19, the state-run Korean Central News Agency said Monday in a Korean-language report.

The emergency anti-epidemic units at all levels have focused on further reinforcing antivirus measures to “further thoroughly cement the anti-epidemic wall” and buckled down to raise the public sense of responsibility and awareness of crises in accordance with the outcomes.

“All the officials, workers, and residents have been struggling to exhaustively and voluntarily report and notify minor abnormal symptoms suspicious for malicious infectious disease and alien things as well as to root out tokenism in medical examination while supporting and controlling each other,” the KCNA said.

The State Emergency Epidemic Prevention Headquarters announced on June 30 that a COVID-19 outbreak began from people touching “alien things” in Ipho-ri of Kumgang County of Kangwon Province, located near the eastern inter-Korean border.

The announcement did not specify what the “alien things” referred to, but it suggested that they could be anti-North Korean propaganda leaflets and other items that South Korean civic groups have sent across the inter-Korean border via balloons.

The “emergency instructions” by the agency were issued to step up vigilance on alien things and urge the North Korean people not to come in contact with the items and immediately report them to the authorities upon sight.

For instance, the city of Kaesong, which is located in the vicinity of the western inter-Korean border, has “intensified the emergency anti-epidemic campaign,” the KCNA said Sunday in a Korean-language dispatch.

The city has taken actions to “establish a stricter system of making units at all levels and residents voluntarily and thoroughly report and inform of minor abnormal symptoms suspicious for malicious epidemic and alien things.”

In another follow-up measure, the epidemic headquarters has also stepped up border restrictions on the ground, at sea and in the air, the KCNA reported Sunday in a separate Korean-language article.

The agency has been “devising powerful measures including promptly drawing up and instructing actions to further strengthen blockade of ground, sea and airspace to prevent any loopholes that allow the inflow of virus,” the report read, without elaborating on the areas affected.

North Korea began to shut down its border in January 2020. Cross-border freight train services running between China and North Korea had temporarily resumed between January and April this year, but services were suspended once again in late April after COVID-19 ran rampant in the border city of Dandong.

North Korea additionally has been taking “practical measures” to increase the number of health workers in charge of anti-epidemic measures at the main transit points in the border areas and adjacent regions, the KCNA reported Saturday.

More testing facilities have been put up in cities and counties near the border. North Korean authorities also have provided supplies for medical examinations and diagnostic reagents for areas by priority.

After the results of the investigation were announced, North Korea has been taking “timely measures to thoroughly eradicate all elements that pose a threat” to the prevention and control of the disease, the KCNA added.

As part of efforts, education materials were swiftly distributed to every emergency anti-epidemic unit to intensively carry out ideological campaigns to indoctrinate people to maintain a high level of awareness about alien things near the inter-Korean border and fulfill their duty to prevent the virus, it said.

Seoul-based experts last week said North Korea’s announcement appears to seek to manage its health crisis and reinforce the Kim Jong-un regime’s leadership by shifting the blame for the spread of COVID-19 to South Korea and capitalizing on the division of the two Koreas.

But at the same time, the KCNA said Saturday that North Korea has strengthened the system to “flexibly and proactively” adjust lockdown measures by region and quarantine measures by unit depending on the epidemic situation. The report alluded to the possibility of North Korea beefing up antivirus measures specifically in the border areas.

Meanwhile, the KCNA claimed Monday that its daily new “fever” cases --believed to be suspected COVID-19 cases -- have remained in the 3,000s for two consecutive days as of Sunday afternoon. The epidemic headquarters reported around 3,030 more people showed fever symptoms in the 24 hours up to 6:00 p.m. on Sunday, putting the tally at 4,755,120.