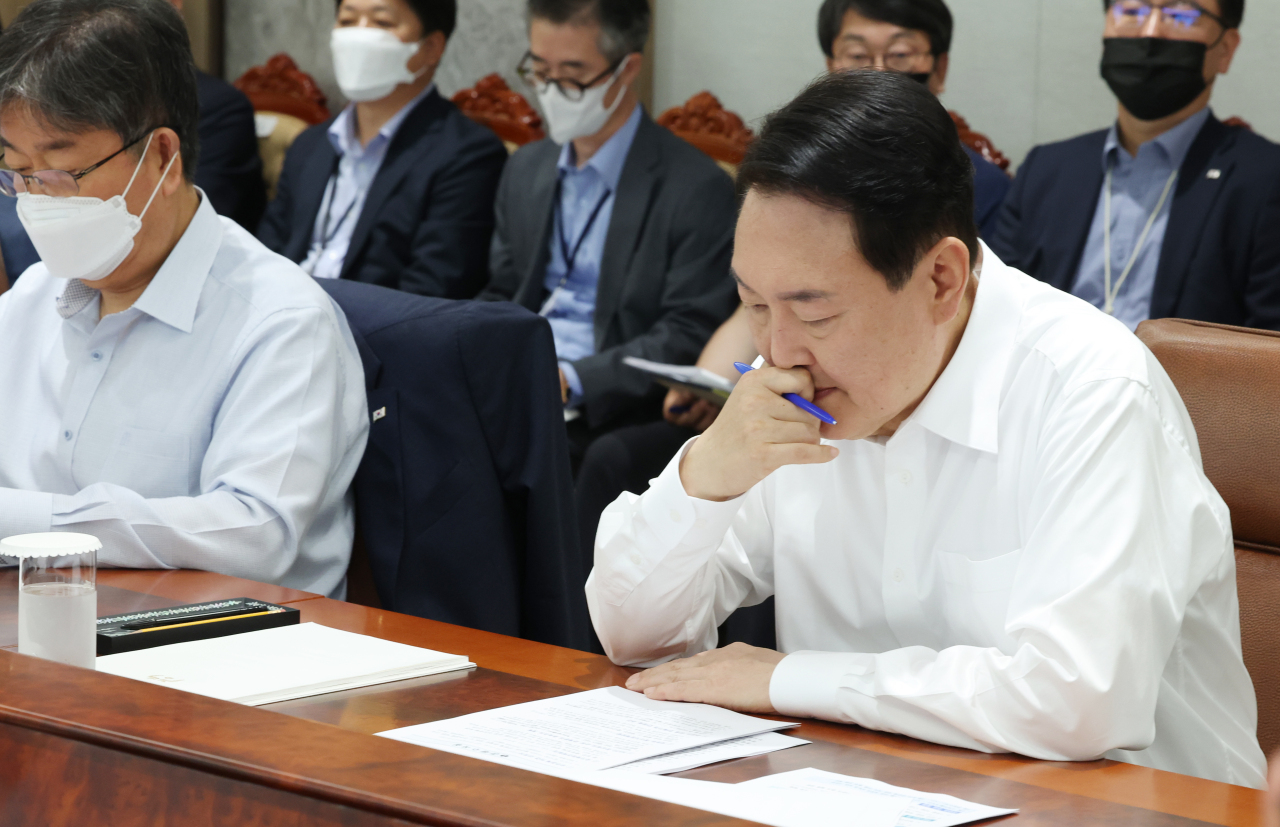 President Yoon Suk-yeol says he “pays no attention to” approval ratings, calling them “meaningless,” but some critics say he should take the poll more seriously and devise measures to dispel public worries.

Disapproval ratings for Yoon’s handling of state affairs continued to outperform his approval ratings on Monday despite last week’s trip to the NATO summit in Madrid, Spain, during which the administration focused on building security and economic ties with Western partners.

According to a survey conducted by Realmeter of 2,514 men and women aged 18 or older nationwide from June 27 to July 1, 50.2 percent of respondents said President Yoon is “not handling state affairs well,“ while 44.4 percent said he is “performing well.” Negative responses increased by 2.5 percentage points from the previous week, and positive responses decreased by 2.2 percentage points.

The decline in approval ratings appears to be linked to personnel appointments and ongoing strife within the president’s People Power Party.

Another survey conducted by polling agency Gallup showed the most common reason for giving the president a negative evaluation is ”personnel appointments.”

Most recently, nominees chosen by Yoon to run the ministries of education and health were pressured to resign amid controversy over their qualifications. Health minister nominee Kim Seung-hee was investigated by prosecutors for allegedly using her political funds when she was a lawmaker to pay for her husband‘s car insurance and car rental fees. Education minister nominee Park Soon-ae has faced calls to bow out over her drunk driving record. On Monday, Kim resigned while Yoon pushed Park‘s appointment through.

The ruling People Power Party is also in tatters. Throughout the month of June, internal feuds over party leadership continued, following allegations that party leader Lee Jun-seok received sexual services as a bribe. The party is also facing growing calls to solve issues such as inflation and repair damages following torrential rains.

When asked by reporters about the decline in his approval ratings, President Yoon said, “I didn‘t think about the approval rating even when I was running for president,” adding, “It’s meaningless.”

He said, “What I do is for the people, and I will only work hard thinking about the people.”

Yu Yong-wha, an invited professor at Hankuk University of Foreign Studies, said Yoon’s lack of concern for his falling approval ratings shows that he is ignoring public opinion.

“That‘s a dangerous idea,” the political commentator said. “The ruling party is only fighting at a time when public anxiety is mounting from economic difficulties and security concerns caused by the North, China and Russia.”

“The Yoon administration must desperately accept the falling approval rating and come up with measures to dispel public worries,” he said.

Political analyst Yoo Chang-sun said in a recent column that the current lack of approval shows that even centrists who turned their backs on the Democratic Party of Korea, are developing a wait-and-see attitude toward Yoon’s administration.

“If the atmosphere is already like this a month after the administration’s inauguration, it will be challenging to have momentum to manage state affairs and to overcome the economic crisis in a parliament dominated by the opposition party,” he said.