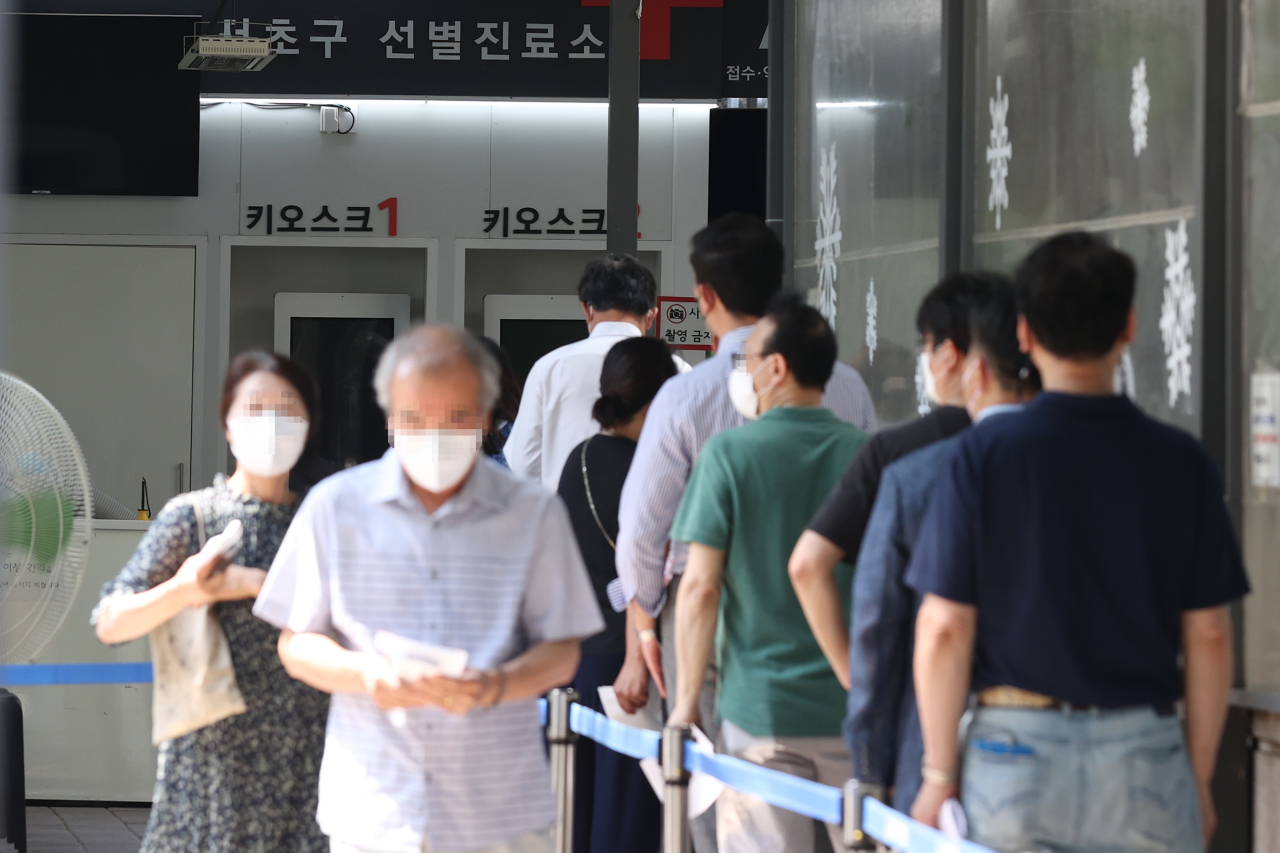 People wait at a COVID-19 testing station in Seoul, Monday. (Yonhap)
South Korea’s daily COVID-19 infections are going up again, ending the downward trend that continued since the omicron-driven wave that pushed up daily cases to over 620,000 in March. As the daily counts continue to increase, the Yoon Suk-yeol administration’s new antivirus measures will be put to the test soon.

Over the last week, the increases in the county’s daily infections speeded up. On Monday, the number of COVID-19 infections went up just by 586 from the previous week. However, towards the weekend, on-week increases became larger, over 3,000.

South Korea’s health authorities on Monday reported that the country added 6,253 new COVID-19 infections during the 24 hours of Sunday, nearly doubling from 3,423 a week ago.

The new administration last month launched an advisory committee of 21 outside experts, which many expect to play a pivotal role in the Yoon administration‘s pandemic measures. The committee was installed under the wing of the prime minister‘s office and would help the government to make decisions on responses to infectious diseases in the future.

The committee will hold its first meeting as early as this month to discuss a series of topics involving the COVID-19 pandemic. The committee is expected to discuss quarantine measures for COVID-19 patients, the country’s mask mandate, and new antivirus measures that can help counter a potential resurgence during the summer season.

Apart from the committee’s affairs, the Yoon administration currently plans to increase the number of “one-stop” COVID-19 treatment centers to around 10,000, where visitors can receive COVID-19 tests, face-to-face treatment, and drug prescriptions in one place.

The government has designated 6,206 treatment centers to date, and the Ministry of Health and Welfare of South Korea says it can achieve its goal soon.

The country currently says the size of a resurgence this summer could reach 150,000 to 200,000 daily cases, and it is preparing antivirus measures accordingly, including hospital beds.

The new administration also planned to conduct tests for COVID-19 antibody positivity earlier in May to secure scientific data for pandemic-related policies. However, the tests were delayed to July, which will allow the government to see the related data one or two months later.

Meanwhile, the absence of the country’s health and welfare minister also remains a risk for the government to respond to the volatile pandemic situation adequately.