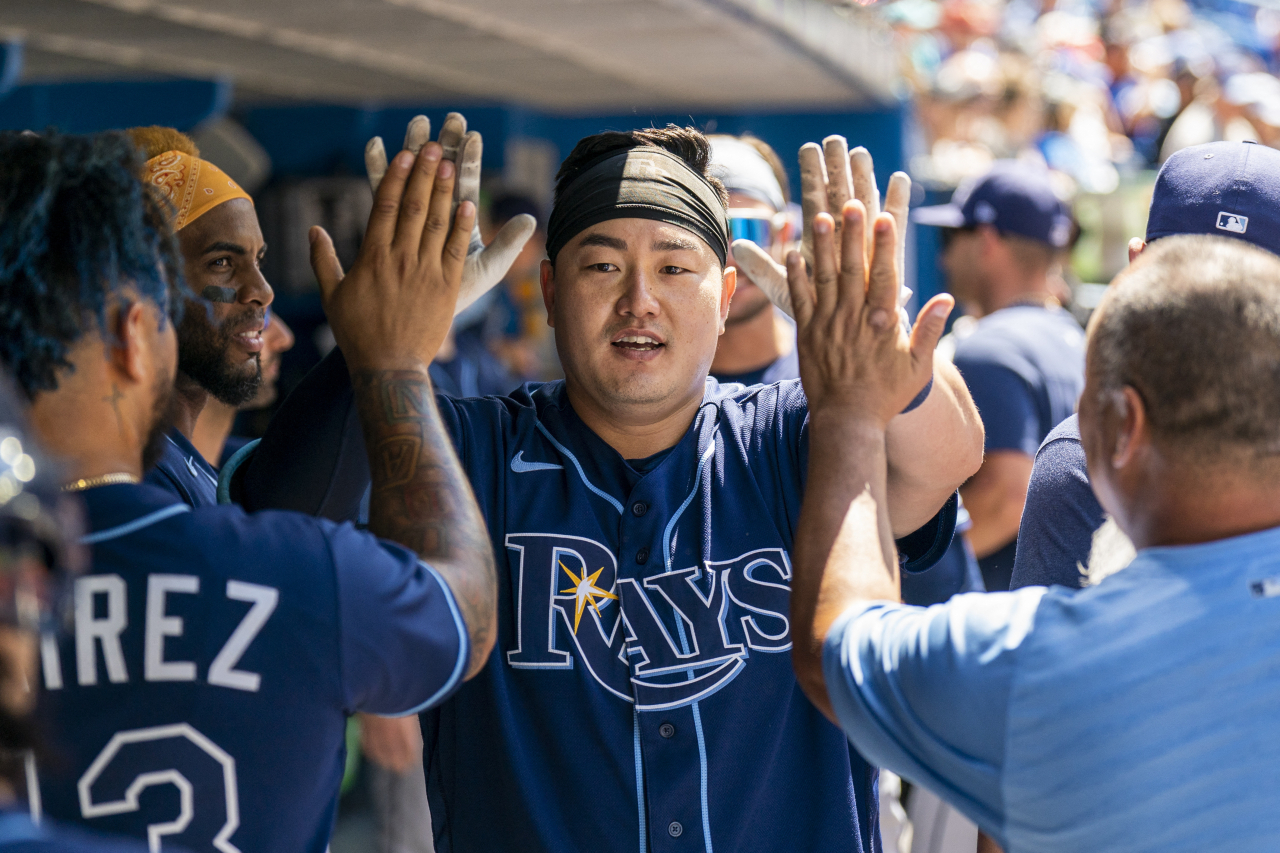 In this USA Today Sports photo via Reuters, Choi Ji-man of the Tampa Bay Rays is greeted by teammates and coaches in the dugout after hitting a solo home run against the Toronto Blue Jays during the top of the fifth inning of a Major League Baseball regular season game at Rogers Centre in Toronto on Sunday. (Reuters)

For the first time in Major League Baseball this season, two South Korean players have homered on the same day.

Choi Ji-man of the Tampa Bay Rays smacked a solo home run in a 7-3 victory over the Toronto Blue Jays at Rogers Centre in Toronto on Sunday (local time). Hours later, Kim Ha-seong of the San Diego Padres belted a two-run shot to help the club to a 4-2 win over the Los Angeles Dodgers in LA.

Choi hadn't homered since June 18. Kim's drought had been even longer, as his last dinger had come on May 13.

Kim has five home runs in 73 games this year, after hitting eight in 117 games as a big league rookie last year.

Choi batted 3-for-5 with a home run and an RBI against the Blue Jays. Choi has 36 RBIs this year, tied for the team lead with outfielder Randy Arozarena. Choi, who missed some time earlier this season with an elbow injury, has played in 20 fewer games than Arozarena.

Choi batted cleanup against Toronto starter Ross Stripling and greeted the right-hander with a two-out single in the top of the first.

After grounding out to second in the fourth, Choi gave new pitcher Trent Thornton a rude welcome with a solo home run in the fifth. At a 0-1 count, Choi turned on an inside slider and drove it just over the right field wall for a 5-1 Tampa Bay lead.

The Rays erupted for six runs on seven hits, including three home runs, in that frame, their biggest inning so far in 2022.

Choi grounded out to shortstop in the seventh but doubled in the ninth for his fourth three-hit game of the season.

After dropping the first two games of the rare five-game series, the Rays claimed the final three at the dome to improve to 43-36, now just half a game behind the Blue Jays for third place in the American League (AL) East and the second AL Wild Card spot.

Batting seventh and playing shortstop against the Dodgers, Kim was held hitless in his first three trips to the plate. He struck out against starter Clayton Kershaw in the second inning and then lined out to third in the fifth. Kim then flied out to center field in the seventh.

The Padres entered the top of the ninth trailing 1-0. Then with one out in the inning, the Padres pieced together three consecutive hits to take a 2-1 lead against reliever Craig Kimbrel.

Yency Almonte came on in relief and struck out Jorge Alfaro. But then Kim pounced on a hanging slider and put it just over the center field wall for a pair of much-needed insurance runs.