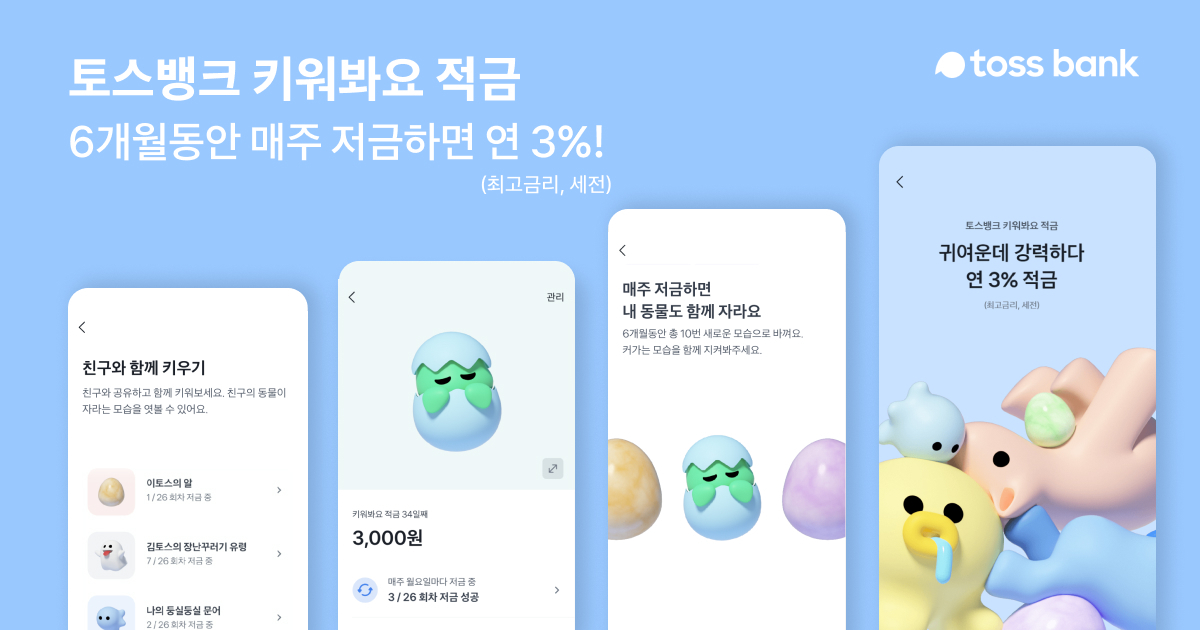 Advertisement for Toss Bank`s savings account(Toss Bank)
Saving money is never fun. But when combined with a digital pet that grows alongside the size of your savings, it can be more motivating.

Toss Bank, launched in October last year, has registered 3.6 million users in just eight months through a slew of unique savings products and digital-friendly services. One of them is a Tamagotchi-like savings account in which a user can see a randomly selected digital pet -- turtle, octopus, colt or ghost -- grow with deposits for six months.

The digital pet idea has been met with booming demand, as Toss opened 100,000 new accounts within 72 hours of its launch on June 14. Users can deposit a maximum 1 million won ($773) per month for a total of six months with a yield of 3 percent.

“The act of saving money requires time and patience, and we wanted to change that time into a fun experience of raising a cute pet for our users,” Toss Bank CEO Hong Min-take told reporters at a media event in Seoul on Tuesday.

Toss Bank also plans to launch a joint mobile account “soon,” Hong added, which will cater to friends and groups seeking to split the bill for their favorite activities.

The nation’s No. 1 internet-only bank by users, KakaoBank -- with 19.13 million users -- has rolled out various accounts and services tied to its sister company and top mobile messenger KakaoTalk. In this sense, 11.39 million users had opened one of its joint accounts as of May. KakaoTalk currently has some 45 million monthly active users in a country of about 51 million.

Its short-term 26-week savings account, a rare product here, was met with high demand upon its launch on June 21, registering 150,000 new accounts within 72 hours. The bank’s piggy bank services are also a key product, allowing users to make deposits of less than 1,000 won on its mobile account daily. The bank managed some 4.35 million piggy bank accounts as of the end of April.

K bank is somewhat behind its two rivals in providing unique services, but it is the only mobile bank here providing a real-name account for cryptocurrency trading. Its partnership with local crypto exchange Upbit, signed in June 2020, has helped more than triple its users from 2.19 million in 2020 to some 7 million as of end-2021.

K bank’s initial public offering plans, which have been stalled for years, have been gaining pace with the firm filing for a preliminary review for listing on the Korean market with the Korea Exchange on Thursday. Its IPO is predicted to be valued at at least 6 trillion won and the firm is forecast to debut in November, according to market watchers.

Korea’s internet-only banks have been expanding quickly in recent years, backed by an increase in the use of smartphones and keeping traditional lenders on their toes with user-friendly services.

K bank recorded a net profit of 22.4 billion won last year, swinging into the black from a net loss of 105.4 billion won the previous year.

Toss Bank, being relatively new to the market, has yet to release its earnings. Its total loans stood at some 4 trillion won as of last month, with 36 percent being taken out by low- and mid-rated customers.