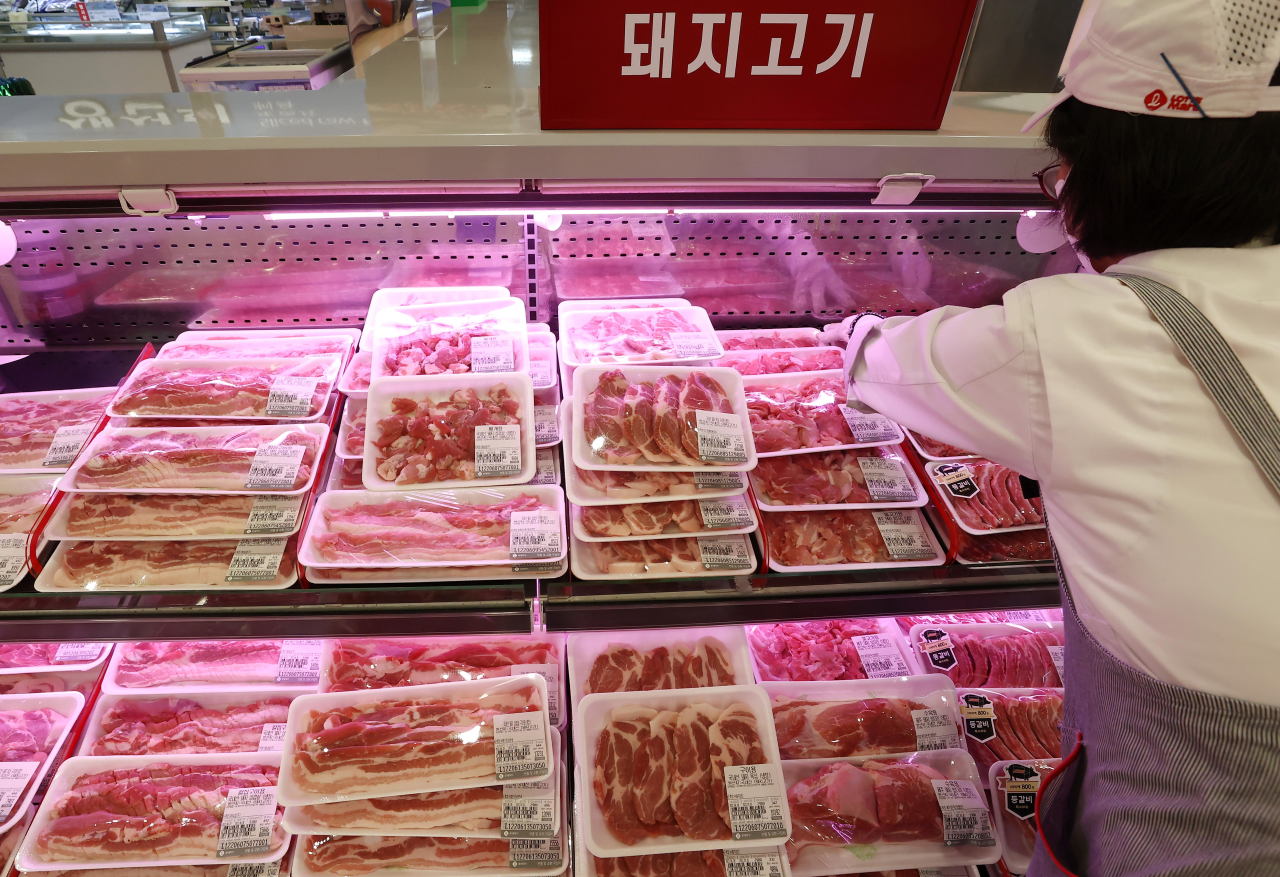 Packaged pork in a showcase at a supermarket in Seoul (Yonhap)
The South Korean government has begun imposing zero tariffs on 50,000 tons of imported pork from Thursday, in a move to stabilize the skyrocketing price of pork here.

It is the first time in 11 years for the Ministry of Agriculture, Food and Rural Affairs to introduce a tariff quota on pork. The ministry allows the import of a certain quantity of a commodity duty-free or at a lower-duty rate.

With zero tariffs, the ministry forecasts that the production cost of pork will go down as much as 18.4-20 percent. The tariff rate on imported pork was around 22.5-25 percent.

In response to the government’s new policy, local supermarket chains have lowered prices on Canadian pork, which will be the most affected by the new tariff.

Except for Canadian pork, which was levied with an 8.6 percent tariff, imported pork from other countries such as the US, Spain, Netherlands and the EU are already duty-free under the Free Trade Agreement, sources said.

Homeplus will lower the price of 100 grams of Canadian pork by 18.2 percent to 2,120 won ($1.6). The supermarket chain plans to take off an additional 4.5 percent on 1,550 won-priced discounted products, taking the price to 1,480 won until July 6. In particular, Canadian jowl meat will be priced at 14,990 won, down by 40 percent. A Homeplus official said the company has increased its amount of Canadian pork by 75 percent.

E-mart plans to cut the price of Canadian pork belly and jowl meat by 30 percent to 1,366 won until Saturday.

Industry watchers say the surge in pork price is driven by Russia’s invasion of Ukraine, coupled with inflation.

“Corn takes up half of the feed used for swine. But the war between the two countries, two of the biggest suppliers of wheat and corn, has led to a shortage of grains, resulting in higher prices of forage crops,” said an official from The Korea Pork Association.

According to data from the Korea Institute for Animal Products Quality Evaluation, the average price of 100 grams of pork surged by 14.5 percent to 2,911 won in June, compared to a month earlier.

Aside from pork, the government will impose zero tariffs on six other commodities, including sunflower oil and wheat.