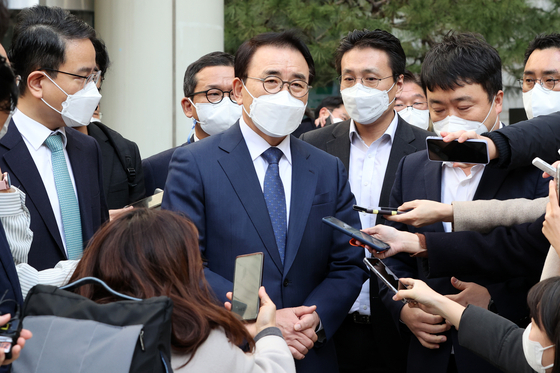 The Supreme Court upheld the Seoul High Court’s decision in November last year to side with Cho on allegations that he had exercised his influence by accepting hiring requests from lawmakers and company executives to recruit their children from 2013 to 2016 while he was CEO of Shinhan’s flagship lender Shinhan Bank.

Prosecutors first indicted Cho and seven other Shinhan Bank officials -– including human resources staff -- in 2018 on two main allegations. One was for meddling with the hiring of 30 applicants by taking in favors; the other was manipulating the recruitment process to make sure that male applicants took up three quarters of the open positions.

The Seoul Eastern District Court in 2020 initially ruled that Cho meddled in three recruitment cases, while the other seven officials were suspected of meddling in others. But the top court said that among the three recruitment cases Cho was suspected of meddling in, two were justifiably hired based on their performance, and one who was not hired failed to pass the interview.

However, this did not clear the company of unethical hiring practices. Unlike Cho, some of the other Shinhan Bank officials, including Yoon Seung-wook, a former vice president at the lender, were found guilty.

Cho had initially received a six-month prison term alongside a two-year suspension from the Seoul Eastern District Court in 2020, which he appealed to a higher court.

If Cho had been found guilty by the top court, he would have been barred from becoming an executive at all financial institutions here, blocking him from serving another term as Shinhan Financial Group chairman. Cho is currently serving his second three-year term, which is set to end in March 2023.

Industry watchers say that Cho is now likely to serve another term, as Shinhan has achieved sharp growth under the current chairman. Shinhan Financial Group’s net profit has nearly doubled since Cho took up the reins in 2017, with its annual net profit increasing from 2.91 trillion won ($2.23 billion) in end-2017 to 4.01 trillion won in end-2021, according to regulatory filings.