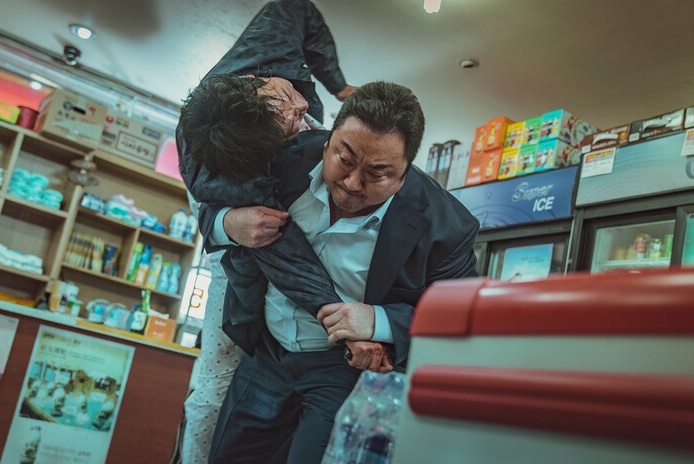 Ma Dong-seok stars in “The Round Up” (ABO Entertainment)
In the latest action thriller “The Round Up,” a tenacious Korean detective Ma Seok-do (Ma Dong-seok, also known as Don Lee) chases after a ruthless murderer Kang Hae-sang (Son Suk-ku) in Vietnam who kidnapped and murdered a Korean tourist there.

Mostly set in the Southeast Asian country, the film’s bloody fight and chase scenes between the two protagonists have enthralled more than 10 million moviegoers, making it one of the biggest box office hits since the pandemic hit South Korea. 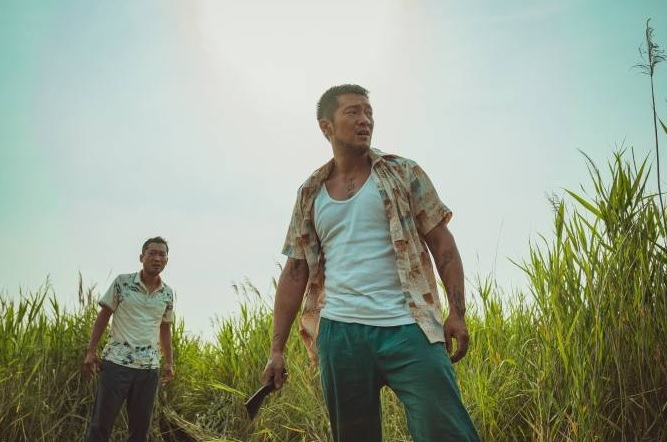 Son Suk-ku stars in “The Round Up” (ABO Entertainment)
In reality, however, Korean detectives can’t run after compatriot criminals in a foreign country without going through Interpol, or the International Criminal Police Organization, according to Kang Ki-taek, a director at the Korean National Police Agency’s foreign affairs bureau. 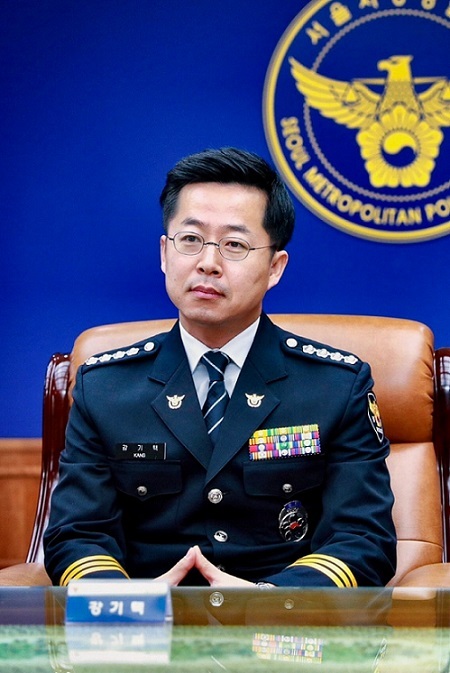 “Regional police officers will then launch an investigation and take steps to arrest and punish the fugitive in accordance with domestic law.”

Created in 1923 to facilitate cross-border investigative cooperation, Interpol operates through a network of National Central Bureaus installed at every police headquarters of its 192 member countries. Kang’s division doubles as Seoul’s NCB, tasked with sharing criminal data and intelligence with foreign counterparts.

Joint police investigation through Interpol is not required by law, but it is an international agreement amongst governments. 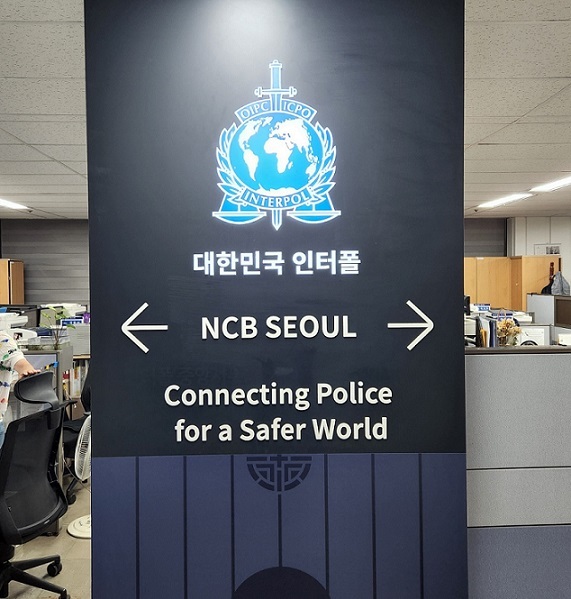 An Interpol sign is installed at the entrance of the Korea National Police Agency‘s foreign affairs bureau which doubles as Seoul’s Interpol National Central Bureau. (Choi Jae-hee / The Korea Herald)
Kang, who was until late 2020 the head of Interpol’s Liaison Office for Asia and South Pacific in Bangkok, also noted in real-life cases, Ma Seok-do’s use of physical force in the pursuit of the criminal in Vietnam is unlikely to be justified, since Ma would be a mere foreigner, not a law enforcement officer there.

Then in reality, how do Korean police nab fugitives hiding in a foreign land?

“The Round Up” is, according to its director Lee Sang-yong, inspired by the true story of a Korean criminal trio who committed a series of kidnappings, and some murders, in Manila and Cebu, the Philippines, between 2008 and 2012. Their primary targets were Korean tourists.

Despite many obstacles in the effort to bring them to justice, all three were eventually nabbed. Two are currently serving life terms in prison here, while one died by suicide after being caught in the Philippines. 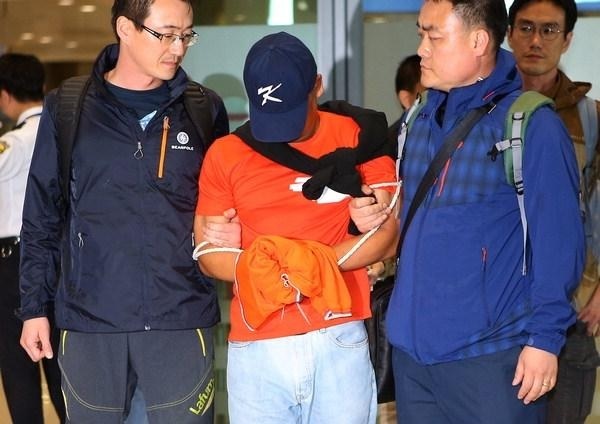 Kim Sung-kon, one of the three criminals who committed serial kidnappings in the Philippines between 2008 and 2012, arrives at the Incheon International Airport in Incheon on May 13, 2015, after being extradited from the Philippines to Seoul. (Yonhap)
The Philippines, with its large expatriate Korean communities attracting those seeking to hide from the Korean law, is among the several countries that Korean police have committed extra resources to enhance such cross-border cooperation.

Since 2010, the national police agency operates “Korean desk” in the country, as well as Vietnam, China, Thailand and Cambodia.

“Police officers dispatched there, are in charge of cooperating with the host country’s police to arrest criminals. Working either at Korean embassies or local police agencies, they play a key role in smooth communication between the police authorities of the two countries, which is crucial for cooperative investigation,” Kang said.

When overseas, Korean citizens are subject to the laws of the country they are in. So crimes committed by Koreans overseas is under the jurisdiction of the country they took place. But Korean police can take steps to bring them back to be tried and, if convicted, be punished by Korean law.
Making this possible is extradition treaties that Korea has signed with 78 nations, including the US, Canada, China, Japan, Southeast Asian countries like the Philippines and Vietnam, and many European states like France, Germany and the UK, according to the KNPA.

“The extradition is a complicated diplomatic process. Foreign ministries and justice ministries should closely communicate, but the final decision (on whether or not to send the person to the requesting state) is made by the requested country’s court,” Kang explained.

According to the KNPA data, a total of 373 Koreans suspected or convicted of committing a crime were repatriated here last year through this process, a 37.6 percent increase from a year earlier.

“When it comes to overseas financial crimes like voice phishing scams, it’s important to track down the suspects’ IP addresses with cooperation with foreign police authorities. Nearly 70 percent of those involved in voice phishing scams are based overseas,” he said.

Personally, Kang said he has seen many criminals fleeing abroad and repeating crimes there. “We can’t give them headroom for more criminal activity. Criminal punishment should have no borders.”