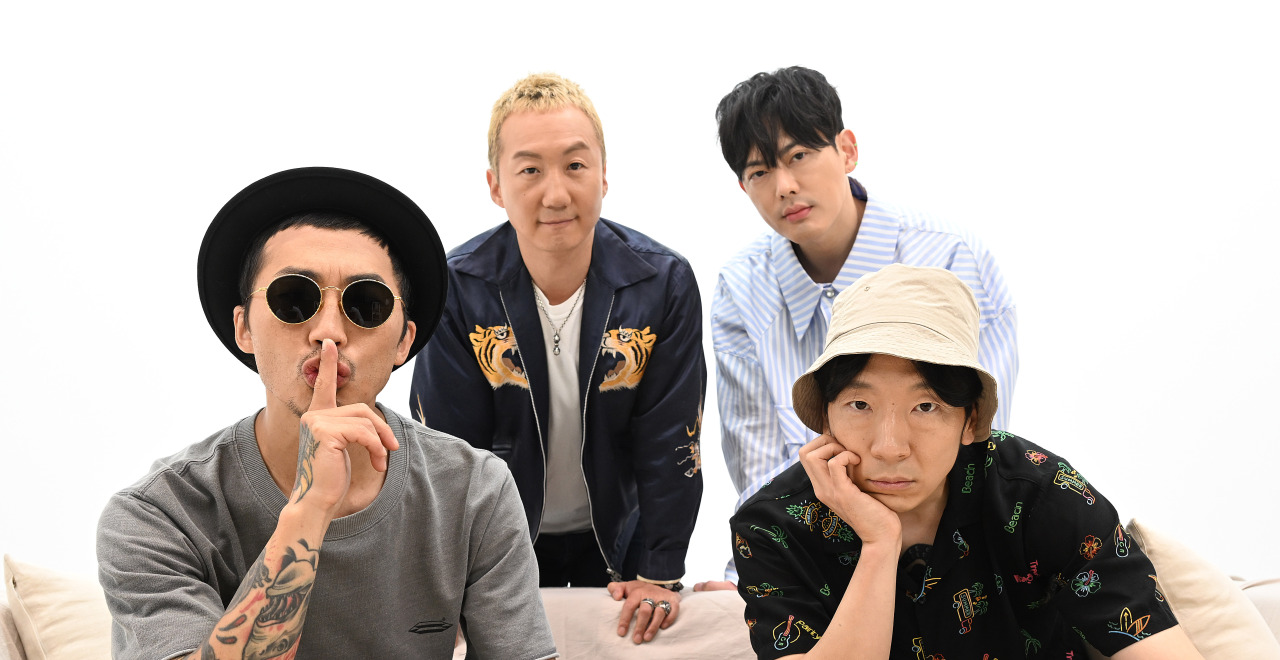 Legendary punk rock band No Brain poses for photos during an interview with The Korea Herald at The Korea Herald’s headquarters in Seoul, on Friday. (Im Se-jun/The Korea Herald)
In the 1990s, when Korea’s punk rock scene was a barren land, there was one group causing a sensation across the country. Since its debut in 1996, the legendary band No Brain has been one of the first generation of acts to play a major role in spreading the sound of rock ‘n’ roll in Korea.

Even long-running K-pop groups seldom survive past seven years, so it is rare to see a band that continues to make music for over two decades. Although they have faced challenges, like the departure of key members, No Brain is still a blazing fire of passion for rock music.

In a recent interview with The Korea Herald, No Brain frontman Lee Sung-woo said that the key behind the act’s longevity is its “onstage performances.” 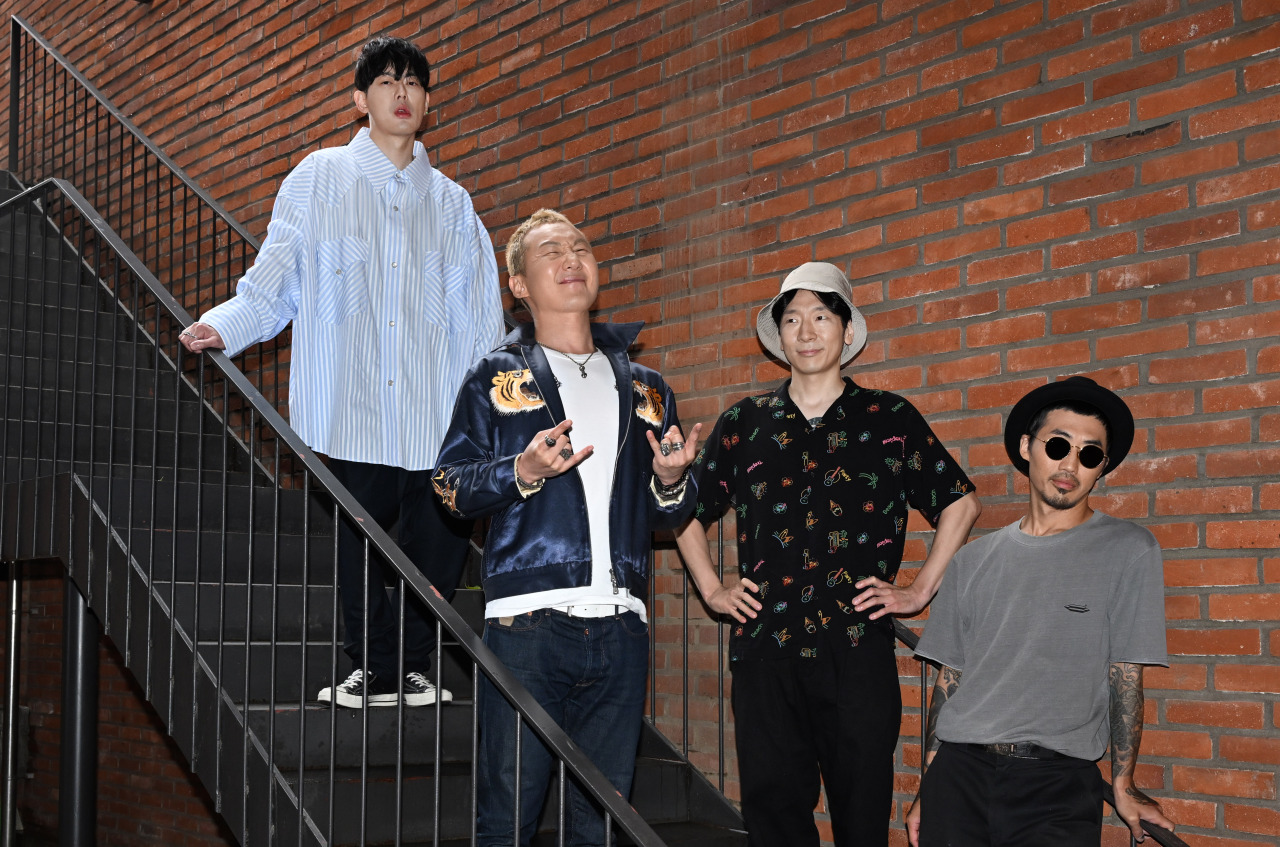 Legendary punk rock band No Brain poses for photos during an interview with The Korea Herald at The Korea Herald’s headquarters in Seoul, on Friday. (Im Se-jun/The Korea Herald)
“Even when we have hard feelings toward one another, conflicts suddenly disappear when we’re united onstage. I usually have my back turned to the group while I’m performing, but when I catch a glimpse of them, their passionate performances boost my enthusiasm even more,” Lee said.

Since its debut at an underground club in Hongdae, western Seoul, 26 years ago, No Brain has performed more than 4,000 times. But even this legendary act struggled for opportunities to play during the pandemic.

With COVID-19 restrictions lifted, No Brain hosted a concert on Sunday for the first time in almost six years in Seoul. Some 400 fans flocked to the event to rock out to the music of the punk rock legends.

At the 90-minute show, No Brain performed hits such as “You Have a Crush on Me,” “Party Like Crazy” and “Rain and You,” as well as two songs from its first all-English EP, “Big Mistake,” released earlier this month. Attendees sang along to each song while putting their arms around each other’s shoulders. Some were jumping around the venue with excitement.

Ahead of the long-awaited performance, the band members expressed high hopes for their first public show in a long while. 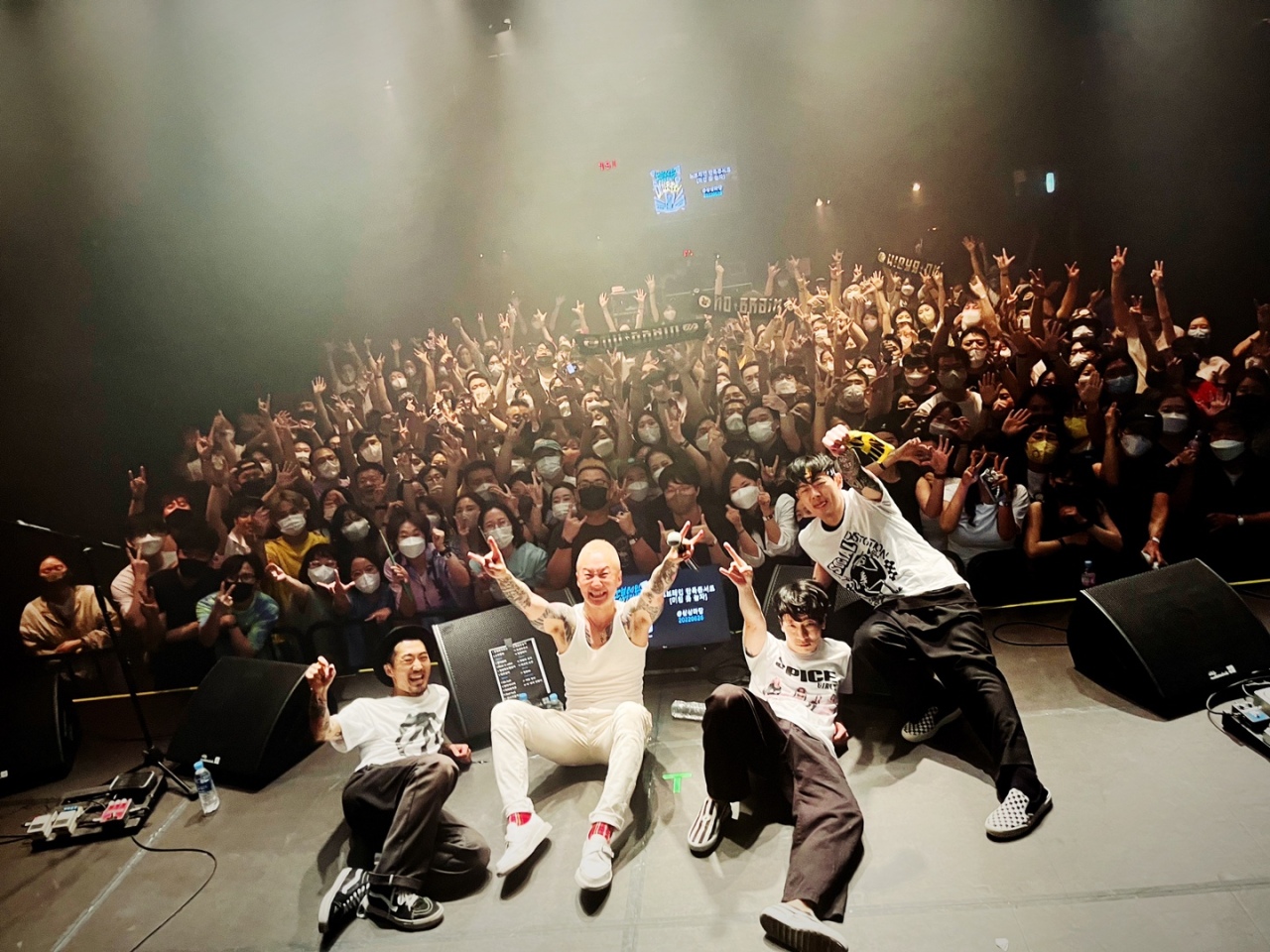 Legendary punk rock band No Brain takes pictures with some 400 fans after wrapping up its first concert in almost six years at the Live Hall of the KT&G SangsangMadang Center in Hongdae, Seoul, on Sunday. (Roxta Muzik & Live)
Jung, the bass guitarist, said, “Like the fans, we’re so excited to hold an in-person concert finally. We had to cancel our last one when the virus spread fast across the country. Since we and our fans have been anticipating this show for a while, there could be an amazing atmosphere.”

The new EP, “Big Mistake,” was originally set to be released last year as a special gift to fans to mark the band’s 25th anniversary. The EP was made in 2014 in the US, but it took another eight years to get everything ready due to copyright and contract issues in the US, the members explained.

Before the legal issues that postponed the release for eight years, signing a recording contract with record producer Seymour Stein felt like “a sweet dream,” the vocalist said. The bass guitarist added that he considered the opportunity a reward for the band’s decades-long musical career.

The band worked hard on its debut in the US. Yet, after a series of issues caused the EP to be postponed for years, the vocalist and drummer pointed out that the act’s confidence in the US-produced album’s success was a “big mistake.”

Legendary punk rock band No Brain poses for photos during an interview with The Korea Herald at The Korea Herald’s headquarters in Seoul, on Friday. (Im Se-jun/The Korea Herald)
Turning the unexpected issues into a lesson, the band decided to name it “Big Mistake,” the vocalist further added. To commemorate the release of the EP, the band is also planning to issue a limited edition version on vinyl in October, the guitarist hinted. The record’s cover will be hot pink since the color represents the act’s softer side despite their tough image, he explained.

Intending to continue its musical career for another two decades or more, this first-generation rock band shared its desire to kick-start another wave of bands across the country. According to the vocalist, not many acts that were active in the early 2000s remain in the local music scene.

“Right after hosting the World Cup in 2002, bands performed together everywhere. We didn’t realize how precious the opportunities were. Now we wish to see the local band scene pick up again, where many musicians and audiences can experience the rebellion of rock ‘n’ roll.”